Home » Looking for all the places to meet God

Looking for all the places to meet God 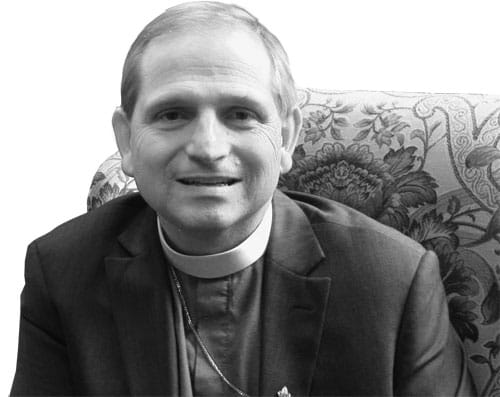 Bishop Michael Bird: “We’ve spent a lot of time trying to discern where God is leading us.” Photo: Kristin Jenkins

Bishop Michael Bird of the diocese of Niagara is a glass half full kind of guy. He has only been in the job for two and a half years, so one could argue that he’s just not tired enough yet. But spend some time with the man, and you come away certain this is not lip-service.

“Everything can be seen as a negative or as an opportunity,” he says. As an example, Bishop Bird points to 10-year statistics for the U.S. Episcopal Church, where attendance has declined 18 per cent. “There’s a lot of doom and gloom about that,” he says. “But that puts us in the position to say something significant needs to happen.”

Bishop Bird actually sees resources where others see scarcity. He gets inspired by the opportunity that comes with change despite not knowing where that change might lead. He feels passionate about moving forward despite mind-boggling odds. And he is unafraid about not having all the answers because he trusts they will come.

“We’ve spent a lot of time trying to discern where God is leading us as a diocese,” he says. In spite of a “strong sense that the Holy Spirit is moving us, just where we’re heading isn’t exactly clear,” he admits. “I don’t think any of us knows this [yet] in the life of the church.”

Instead, he supports the notion that the way forward lies in the process of taking risks and then sharing the stories. Making mistakes is inevitable, he adds, and if you don’t share the stories, you could miss something important. “We don’t always know what success looks like,” he explains. “Sometimes, the things that look like mistakes or failures may actually be the first step in some great breakthrough.”

He declined to provide a vision for the diocese before he was elected, instead reflecting on the direction of his own episcopal ministry. His journey to Lambeth Palace in London, just three months after he was elected, had a profound impact. Following meetings with fellow Anglican bishops from around the globe, Bishop Bird visited the Bernardo Children’s Charity, an organization that ran orphanages across the U.K. from the mid-1800s to the end of the 19th century. There, with the help of official records, Bishop Bird learned that his great-grandfather had been a beggar on the streets of London and that his grandfather and great-uncle had grown up in an orphanage. “It was a story that wasn’t talked about in my family,” he says.

Weeks after returning home, he received a package containing photographs of his great-uncle, on the day he arrived at the orphanage and on the day he departed. “You can imagine how that story changed my life,” Bishop Bird tells me in his office at Cathedral Place in downtown Hamilton, one of the poorest urban neighbourhoods in Canada. Statistics show that living conditions there are akin to subsisting in a Third World country. “You can begin to understand why I think I’ve been called as the bishop of Niagara, sitting in this office in this place,” he says.

Bishop Bird also learned about incredible challenges and obstacles to ministry facing bishops in Africa. In spite of this, he saw “an incredible passion and joy at seeing their churches grow.” When he returned home, the diocese of Niagara looked very different.

“I saw the rich resources we have here. I began telling people that I had just come back from an experience that told me loud and clear that we are actually operating out of a place of abundance. God gives us what we need.” He adds, “Nowhere is that more true than in this diocese. I believe that with all my heart and soul.”

He sent out an invitation across the diocese saying that he would clear his calendar to attend any kind of gathering. “I had no idea if anyone would take me up on it or not,” he admits. Within two weeks, he was booked solid. In all, he attended 22 different gatherings in just a few weeks, sharing his own story of transformation and inviting others to share theirs.

At each gathering, stories were recorded and a “Speaker’s Corner” set up so people could also share their thoughts and feelings on video. In addition to his own story, Bishop Bird began to share his passion for the diocese and his conviction that resources were plentiful. He also began to talk about the pursuit of excellence for ministry, “another thing that I believe we’re called to at this time.”

A vision for the diocese began to emerge. It had five distinct areas of focus, like petals on a flower. They include outstanding leadership for ministry; continuous culture of innovation; life-changing worship; a generous culture of stewardship; and prophetic social justice making. “I can say them in my sleep,” says Bishop Bird. Each petal has a leadership team that supports congregations, where the real work of change and transformation is taking place.

When Bishop Bird looks around the diocese, he sees a lot to be thankful for, including knowledgeable, capable leaders, an energized, vibrant youth ministry and a passion for social justice and environmental stewardship. “I think we are people who have the leadership ability, the creativity and so forth, but we need to do better at getting resources into the hands of people who need them.

“At this moment in the life of the church,” he adds, “I think we have to be very disciplined around our work, our thinking and our actions.”

Bishop Bird believes in getting better at advocacy that targets the root problems and encouraging congregations to engage politicians in strategies for dealing with matters like poverty reduction and social justice.

The way forward includes getting out to meet people where they are. On the wall of innovation on the diocesan website, for instance, where parishioners are encouraged to share their ideas and stories, you’ll read about fresh expressions such as the Church on Tap ministry. The priest who runs it out of a pub vows the group is attracting people “who would never set foot inside a church,” notes Bishop Bird.

It’s not about convincing people to think like you do, he insists. It’s about having the conversation. “God is in the conversation,” says Bishop Bird, “not when you and I have come to a common mind on something, after I’ve ranted and raved enough or brought you around to my way of thinking. “

It’s no longer enough to expect people to come to us, he points out. “We’ve got to encounter people and we’ve got to do it with humility. We need to listen to people and meet them on common ground, such as care for the environment.”

“If we are going to be inviting people and talking to them about what our church means to us, how it’s changed our lives and what the presence of God means in our lives, then we need to be able to do that on a fairly firm footing.”

It’s also important to acknowledge that while Anglicans are learning to do new things, such as connecting with the unchurched, such as through the Back to Church Sunday initiative, the problems they are designed to address may have been difficult to avoid. Let’s not “beat ourselves up too much,” says Bishop Bird. “A number of things have been beyond our control.” In many ways, he points out, the Anglican church is a victim of its own success. “The more success you enjoy,” he says, “the harder it is to change when you need to change.”

It’s a challenging time to be a bishop, he admits. With the church no longer tied to the state, it’s also “pretty clear” the church is moving away from a hierarchical model. So where does that leave leaders who still want to build consensus but also have to make the tough decisions?

Without knowing the answers, Bishop Bird still feels passionately that the church has a voice that’s listened to. “We may not have the place in society that we had 40 years ago, but in actual fact, I think it’s a healthier place now because we’re freer to say what we need to say and be prophets.”

In the end, he says, it’s really about the conversation. “I really believe that we meet God in the dialogue, in the journey, and I think that in fact that’s part of being Christian.

“It’s not so much about feeding people the right answers,” he adds. “It’s about walking with them on the journey. That’s where we meet God.” Ω