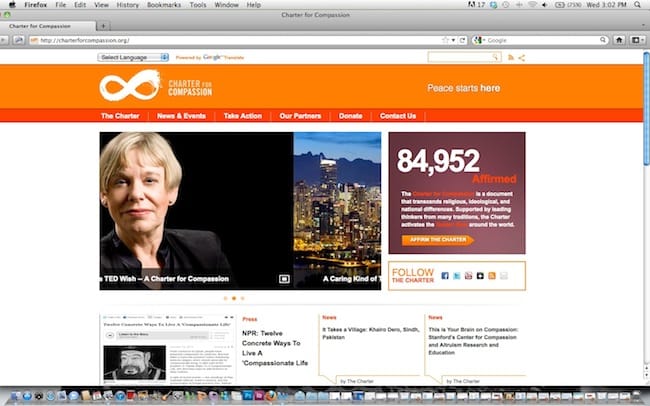 British religious scholar Karen Armstrong will have a live update on the “State of the Charter for Compassion” on Thursday, March 22, in Vancouver.

British religious scholar Karen Armstrong will have a live update on the “State of the Charter for Compassion” on Thursday, March 22, in Vancouver. Armstrong’s public lecture is hosted by the Simon Fraser University (SFU) Centre for Dialogue, as part of its “12 Days of Compassion” that began March 19. The sold-out public event will take place at the Gladstone Secondary School, and will be available worldwide via Livestream here.

A former Catholic nun who is now an author and historian, Armstrong won the TED (Technology, Entertainment, Design) Prize in 2008 that granted her wish: “To restore the Golden Rule-treating others as we wish to be treated ourselves-to the center of religious, moral and civic life.”

Started in 1984, the annual TED Prize winner receives $100,000. In Armstrong’s hands this led to the creation, in 2009, of the Charter of Compassion, endorsed by such religious leaders as Anglican Archbishop and Nobel Prize laureate Desmond Tutu and the Dalai Lama.  It has also led to the global compassion movement that has a following of 80,000.

Armstrong, who is also the SFU Jack P. Blaney Award 2012 recipient, has become one of the most provocative and original thinkers on the role of religion in the modern world,” according to the SFU website. “As a speaker and writer, Armstrong asserts that all major religions embrace the core principle of compassion and the Golden Rule, and also emphasizes that many of today’s religions bear similar strains of fundamentalism borne of frustration with contemporary life and current events.”

Armstrong’s presentation will include stories from Pakistan, Jordan, Kentucky and Vancouver and discuss a global call to action with "Assignment Compassion."