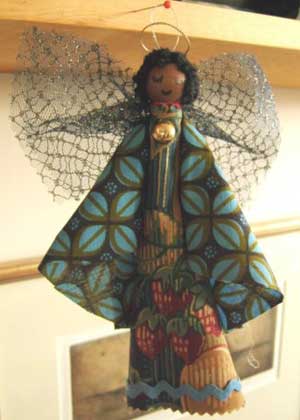 Angels made by church groups from basic craft materials sell for $5; proceeds from the sales benefit AIDS projects in Africa.

Two groups of Canadians from several churches have raised over $100,000 in five years for AIDS projects in Africa by making craft angels. One of the projects, an ecumenical community-development organization in Lusaka that includes an orphanage for children who have lost parents to the disease, was founded by an Anglican priest from Great Britain, Rev. Pierre Dil.

The groups, based in Ottawa and Victoria, are linked to two Roman Catholic parishes, each named Holy Cross, said Mary Bomford, a member of the Victoria group. Groups of 20 to 30 people that include a range of ages and religious denominations gather on a bi-weekly basis to create the 10 cm-high angels, made of such simple materials as wood and scraps of fabric. Sold for $5, the angels have also benefited projects in Malawi and South Africa including a hospital, another orphanage and a gardening project. More information is available at www.wolfweb.ca/angels.