Home » Harnessing the power of the past for a better future

Harnessing the power of the past for a better future 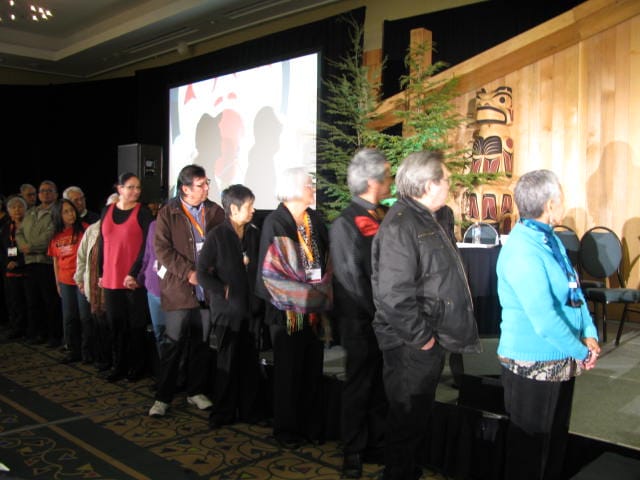 Participants at a recent national forum on creating a national research centre on the residential schools. Photo: Diana Swift

Vancouver
Memorials established in places of past violent conflicts can harness the power of memory to promote contemporary social justice, Elizabeth Silkes told those attending the recent Sharing the Truth conference in Vancouver.

Silkes is the executive director of the New York-based International Coalition of Sites of Conscience. This worldwide network of historic locales specifically dedicated to remembering past struggles for justice and addressing their contemporary legacies was formed in 1999.

“Our aim is to change the role of historic sites and museums from places of passive learning to places of transformation to build lasting culture for human rights,” said Silkes. To this end, the coalition provides direct funding to sites for civic engagement, teaching programs, peer learning exchanges, mentorship and international conferences. It also publishes case studies and policy briefs. Fostering dialogue on pressing social issues and promoting humanitarian and democratic values are primary functions. “We currently promote online dialogue in four languages,” Silkes said.

Also speaking at the conference, author-publisher Modiful Hoque outlined the development of the Liberation War Museum in Dhaka, Bangladesh, one of the 17 accredited sites. Inaugurated in 1996, the museum chronicles the protracted struggle of the people of Bangladesh in establishing their identity as a nation under the British regime as well as their their armed struggle during the War of Liberation in 1971 against Pakistan’s military government.

The Liberation War Museum in Bangladesh is one of nine founding members of the coalition. The others include: the District Six Museum in South Africa, the Gulag Museum in Russia, the Lower East Side Tenement Museum in the U.S., the Maison des Esclaves in Senegal, the National Park Service in the U.S., the Memoria Abierta in Argentina, the Terezin Memorial in the Czech Republic, and the Workhouse in the U.K. Today the coalition has more than 260 individual and institutional members in 90 countries around the world.

For more information or to join the coalition, go to the International Coalition of Sites of Conscience website.