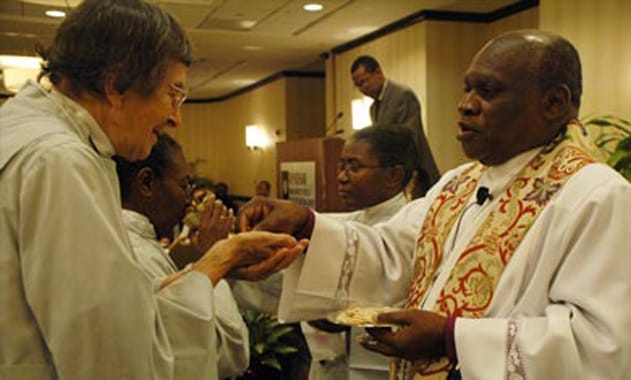 Episcopal News Service (ENS)-The first phase of post-earthquake reconstruction and development of the Episcopal Diocese of Haiti will cost close to $197 million, according to a plan released here during a Nov. 3-5 meeting of many of the diocese’s current mission partners.

A version of the plan was released during the Haiti Connection Conference in Miami. Close to 185 people from 32 U.S. states, as well as Washington D.C., Canada, the Virgin Islands and Jamaica, were registered to attend. The participants, who represent organizations engaged in ministry in Haiti, gather biennially to exchange information about their work. The last conference was November 2008 in Port-au-Prince, the now-devastated Haitian capital.

The conference began while Tropical Storm Tomas was developing into a Category One hurricane and barreling towards Haiti where more than 1 million quake survivors are still living in tents.

Tomas moved through the Windward Passage between Cuba and Haiti on Nov. 5 about 140 miles west northwest of Port-au-Prince. The National Hurricane Center predicted that much of Haiti would receive between five and 10 inches of rain. Hurricane-force winds were expected over the southwestern peninsula of Haiti. Some of the Haitians attending the meeting were unable to return home because all flights to Port-au-Prince were canceled.

Bishop Jean Zache Duracin, who told the conference that the plan will allow the diocese to live into its post-quake resurrection, told Episcopal News Service that a supplement to the plan will soon be developed to include the costs for repairing Hopital Sainte Croix in Leogane near the quake’s epicenter. The complete plan will be posted on the Haiti Connection website when it is available, said Ken Quigley, one of the conference organizers.

An ENS summary of the current version of the plan is available here.

The diocese says in the plan that it wants to go beyond rebuilding to look at the capacity of its parishes, schools and medical institutions to address community and congregational needs in the tradition of the diocese’s service to Haiti since the church was founded in late 1850 by the Rev. James Theodore Holly.

Those losses equal an estimated $61.3 million, according to a list included in the plan as explained by the Rev. Mathieu Brutus, a Haitian priest who was part of the commission that developed the plan. Brutus also told ENS that the total reconstruction cost estimates listed in the version of the plan released to conference participants were not accurate and confirmed the figures reported above.

Brutus and Duracin said that a commission whose members are just now being nominated will be charged with formulating a fundraising plan for the reconstruction and development effort. They said that many of the entities in the plan, including the cathedral, the convent and the Holy Trinity music school, already have promises of financial help.

The Episcopal Church’s Executive Council in October committed to a plan for living out its earlier challenge to the church to raise $10 million to help rebuild the diocese. At Duracin’s request, that money will be dedicated to cathedral reconstruction.

The quake "has made us live differently," Duracin told the gathering Nov. 4. "We are obliged to have new vision."

He thanked the Episcopal and Anglican organizations and individuals who he said have thus far helped the diocese move towards a "new era of re-creation, rebuilding, rebirth and resurrection."

The plan contains a list of "priorities among priorities because in Haiti everything is a priority now," Duracin said.

The projects listed in the plan were chosen because they "represent the whole image of the church of Haiti, not only locally but internationally."

Many of the conference speakers said that the diocese needed not just monetary assistance but also partnerships aimed at helping Haiti to move from dependency to the Haitian government’s stated goal of becoming an "emerging nation" by 2020. Haitian economist Kesner Pharel, conference keynote speaker, cautioned that such an emergence must include a "culture of responsibility," which he said is now lacking.

Pharel, who worked with the diocese to develop its reconstruction and development plan, called on the church to "lead by example" and to "manage better than the government is doing right now." He also asked Episcopalians outside of Haiti to invest in the country and to lend their knowledge and skills to teach Haitians how to run their country better.

Margareth Crosnier de Ballaistre, the Episcopal Church Center’s director of investment management and banking and a Haitian-American, told the conference that she and others plan to hold a financial-accountability workshop for all administrators, project managers, social workers and other staff designated by Duracin.

She stressed that every partner and organization working in Haiti "should hold our brothers and sisters accountable with the same standards used here or in Canada." However, she said, Haitians often have a different reaction to accountability expectations.

"Not that Haitians cannot be accountable or not that they are not accountable, but as a Haitian myself, I can tell you we feel that when people ask us for receipts, it’s an insult. If I tell you I spent $10 on a taxi … you should take my word for it," she said, adding that as a Haitian-American she has learned that lack of trust is not the issue, but instead, the issue is a need to account for all activities.

Crosnier de Ballaistre’s comments prompted questions from some conference participants about holding people in a country such as Haiti to the same standards as those used in developed countries. During a question-and-answer session, she said that Haitians and their partners ought to try to achieve the level of accountability she suggested earlier.

Abagail Nelson, senior vice president of programs for Episcopal Relief & Development, told the conference that, at Duracin’s request, the agency will fund a chief of operations position for five years to help strengthen diocesan administrative functions. She also said that accountability begins with an attitude of mutuality between development partners.

"It’s important that we not patronize people and that we ask people to work together," she said.

Pharel said during his closing remarks that if donors accept the idea that Haitians cannot meet North American accountability standards, then "you can keep giving money for the next 100 years and not having any results."

"We risk perpetuating the system of dependency" he said, adding that "dependency holds back development."

The Rev. Rosemari Sullivan, who with the Rev. Joseph Constant were recently appointed to become part of Duracin’s staff and help to coordinate the church’s response to the diocese’s rebuilding efforts, told conference participants that they hope to help the dioceses coordinate that response so that the work can be done "in a way that is much more effective for all concerned." She and Constant can be contacted at [email protected]