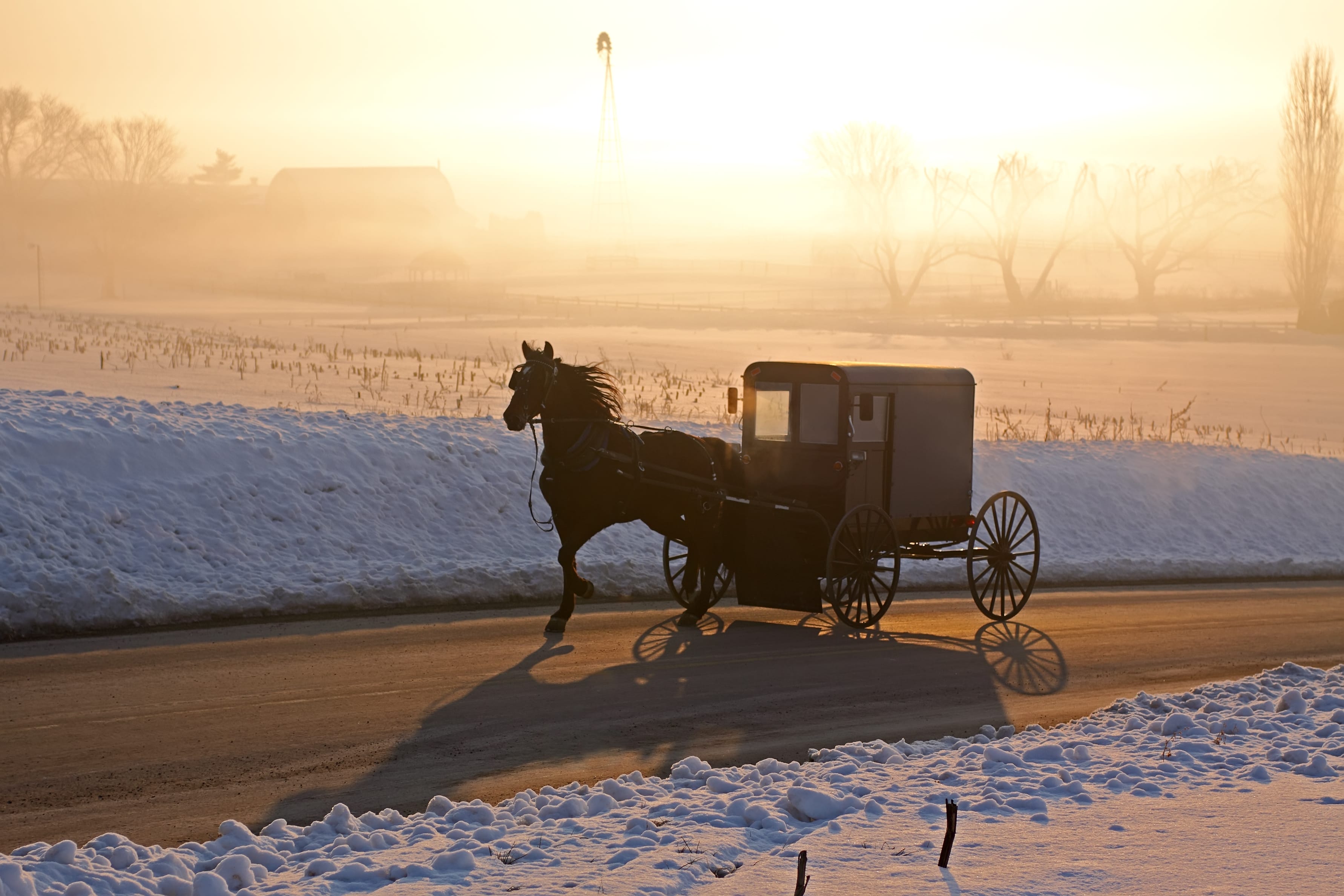 The Amish community in Nickel Mines, Pa., transformed violence to grace when it forgave a gunman who killed schoolchildren in 2006. Photo: Delmas Lehman

Some of us may remember the Academy Award winning movie Gandhi in which Ben Kingsley played the great Indian leader. At one point in the film, Gandhi is walking with a Presbyterian minister by the name of Charlie Andrews. The two suddenly find their way blocked by young thugs. Andrews takes one look at the menacing gangsters and decides to run for it. Gandhi stops him and asks, “Doesn’t the New Testament say if an enemy strikes you on the right cheek, you should offer the left?” Andrews mumbles something about Jesus speaking metaphorically. Gandhi replies, “I’m not so sure. I suspect he meant you must show courage – be willing to take a blow, several blows, to show you will not strike back nor will you be turned aside.”

What do you think? Is Gandhi right? Are we expected literally to turn the other cheek, to take a blow and not strike back? For many of us, this is just too much to swallow. It just doesn’t make sense. It is so contrary to our experience in the world.

Listen to the words of Jesus: “You have heard that it was said, ‘An eye for an eye and a tooth for a tooth.’ But I say to you, Do not resist an evildoer. But if anyone strikes you on the right cheek, turn the other also…You have heard that it was said, ‘You shall love your neighbor and hate your enemy.’ But I say to you, Love your enemies and pray for those who persecute you…”

You and I live in a world where retaliation and even vengeance seem natural. It happens in our politics, in the affairs of nations, in our personal lives, and even in sports. Think of all the brutal hits in hockey by players retaliating for the low blows of opposing players. Think of baseball pitchers who deliberately hit batters because an opposing pitcher hit one of their players. It’s a “hit me and I’ll hit you harder” way of playing the game.

There is a story about a truck driver who stopped for dinner and ordered a steak. Before he could eat it, in walked six members of a motorcycle gang. They took the man’s steak, cut it into six pieces, and ate it. The driver said nothing. He simply paid the bill and walked out. One of the gang members said, “That man couldn’t talk. He didn’t say a word.” Another said, “He couldn’t fight either; he didn’t lift a hand.” A waiter added, “I would say that he couldn’t drive either. On his way out of the parking lot, he ran over six motorcycles.”

Something in us loves that story, because we like retaliation.

But Jesus says no retaliation. Two wrongs never make a right. This is not to say that Jesus forbids self-defense. He is not telling people to stay in situations where they suffer physical or emotional abuse. Jesus does not mean that we should become doormats. Christian ethicists speak about force as a legitimate response to violence. The Church itself has set forth several conditions for a “just war” in which military action against an aggressor may be justified. We have to protect ourselves and those for whom we are responsible.

Jesus is much more concerned with our personal response to injury in our lives – our readiness to seek vengeance, our quickness to take offense, our keenness in asserting our rights, our eagerness to respond to injury with the attitude, “I’ll get mine and get even!” Natural, but wrong!

Jesus is saying that revenge has no part in our lives. That would be retaliation: eye for eye, tooth for tooth – in which case we will all eventually be blind and toothless! No retaliation. Instead we are to practice reparation. When someone injures us, we are to undo the effects of the injury with love.

Here’s a whole new way of looking at relationships – with our family and friends, our neighbors and co-workers. When we are the victim of an injury, we are not to injure back. Instead of planning vengeance, we are to pray for those who hurt us. Instead of demanding our rights, we are to surrender them for the sake of love. To Jesus it is more important to show mercy than to demand justice.

This is no prissy ethic. When love springs from the injured party to the one who has injured us, it has the power to transform relationships.

It was a Monday morning, October 2, 2006. A gunman by the name of Charles Roberts entered a one-room Amish school in Nickel Mines, Pennsylvania. After ordering all the boys and teacher to leave the room, he opened fire on the ten remaining girls, killing five and critically wounding the others. He then shot himself as police stormed the building.

Why would he do such a thing? “I’m angry at God for taking my little daughter,” he told the children before the massacre.

Within a few hours of the shooting, the Amish community of Nickel Mines, Pennsylvania, was surrounded by 50 different news organizations, all reporting on the horrific violence of that day. The killing of little children shocked the sensibilities of the entire world. Naturally, the focus of the news reports focused on the violence.

But something happened that transformed the story from one of violence to grace. The blood in the school house was barely dry when Amish parents brought words of forgiveness to the family of the one who had slain their children. The outside world was incredulous that forgiveness could be offered so quickly for such a heinous crime. But the forgiveness of the Amish was not just in words. Amish families accounted for half of the 75 people who attended the killer’s burial. Roberts’ widow was deeply moved by their presence as Amish families greeted her and her three children. The Amish also supported a fund for the shooter’s family who were near poverty.

Forgiveness eclipsed violence and became the story that was reported by news organizations around the world. In North America, in the Middle East, in Asia and Africa and Europe, on 5340,000 web sites and in 2,900 news reports, the focus on what happened in Nickel Mines, was not on the violence that had occurred but on the power of forgiveness not to let vengeance and hate and retaliation have the last word. (1)

You say that it’s amazing that people could forgive like that, and it is. It is grace, amazing grace – moving beyond the injury and seeking instead to heal the wrong, and not let violence and hate poison our lives.

The really hard part of the teachings of Jesus is to believe that God’s grace is unlimited love – love to the just and the unjust, to the evil and the good alike. God’s love makes no distinctions, has no conditions, and knows no bounds. It’s an undiscriminating and undifferentiating love towards all and sundry. We place limits on that love, but God never does.

Of course, we may not like our enemies, and we may have every reason to detest what they do, but we can still love them. I doubt whether Jesus liked Herod or some of the other notorious characters in the gospels. But I have no doubt that he loved them – because he died for them no less than for us. Should we then not remember that Jesus also died for our enemies as well as for his; and that he regards them as no less precious than us? At the very least, we should pray for our enemies and seek to do them no harm. And perhaps, by God’s grace, we will even find ourselves desiring and working for their good like the Amish in Nickel Mines.