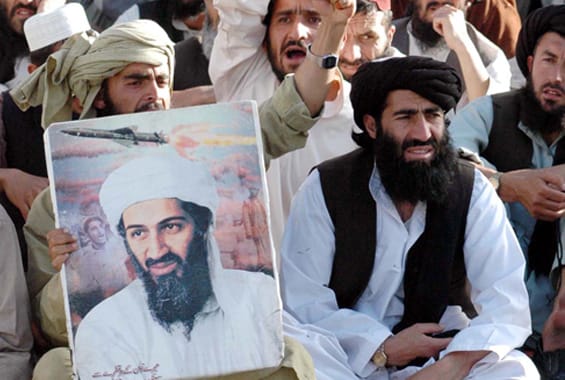 On Sunday night, May 1, the world got word that Osama bin Laden was dead-shot in the chest and head by a United States Navy Seal assassination team. Almost immediately crowds started to gather around the White House and in cities across America, celebrating the covert affair that successfully killed the architect of the worst attack on the United States in its history. At Annapolis, West Point, and the Air Force Academy in Colorado Springs, cadets cheered, sang the national anthem, and chanted "U.S.A.!" College students around the nation did much the same thing.

For most Americans, and for many people in the free world, the death of Osama bin Laden was cause for celebration. Here was a man viewed as evil, sinister, responsible for the deaths of thousands of innocent people, and a man without mercy or compassion. No wonder a poll after his death indicated that 61 per cent of Americans believe Osama bin Laden is in hell. While that reaction is understandable, the church has never placed anyone in hell. We leave the final judgment to God, even as we have the right to judge a person’s actions on earth.

As I struggle to come to terms with the death of Osama bin Laden, its meaning, significance and justification, I find my mind turning to Psalm 137 as being particularly relevant. The first six verses of the psalm are among the most beautiful in scripture: “By the waters of Babylon we sat down and wept, when we remembered you, O Zion.” Here is a psalm of lament in the midst of exile, of mourning for that which has died, of remembrance for that which is no more. But then, in verses 7 through 9 we read words of rage:

against the people of Edom,

even to the ground!”

happy the one who pays you back

for what you have done to us!

Happy shall he be who takes your little ones,

and dashes them against the rock!

The nation of Judah had suffered far worse at the hands of the Babylonians than the United States at the hands of terrorists. The Babylonians had destroyed Jerusalem, burned down the Temple and sent the Jewish king to Babylon in chains after killing all sons and plucking out his eyes. No wonder Psalm 137 was written. It expresses the anger and desire for vengeance against the Babylonian oppressors, who, in their conquest of Judah, had slaughtered even the children. Psalm 137 is a cry to God, a plea that the Babylonians should have happen to them what they inflicted upon the Jewish people-eye for eye, tooth for tooth, life for life.

Feelings of anger, hatred and revenge are not uncommon to people at times of social and religious upheaval. When the foundations begin to shake, when established certainties are put in doubt, when innocent people are cruelly murdered and when a nation is besieged, the natural reaction is to hate those who hurt us, to strike back at those who attack us. We may think of ourselves as tolerant, reasonable people, but in the face of horrific violence we can easily turn into people of rage-the same rage as expressed in Psalm 137, which was written 2,500 years ago. Old Testament scholar John Bright has remarked that the author of Psalm 137 is “typical of that man in every age who is godly and devoted to things of God, yet who-theologically speaking-lives in B.C. His name is Legion.”

Let me give two examples of how we share the same feelings expressed in Psalm 137.

When I was a young priest in the diocese of Rochester, I had the privilege of hearing Ambassador Moorhead Kennedy speak to the clergy about terrorism. Mr. Kennedy knew terrorism firsthand. He had experienced its rage as one of the American hostages in Iran. He also happened to be a Christian, an Anglican, who had given the subject of terrorism a great deal of thought. Referring to the provocative title of his book, The Ayatollah in the Cathedral: Reflections of a Hostage, Mr. Kennedy remarked that there is an ayatollah in each of us-dogmatic, proud, arrogant and intolerant. He quoted a marine hostage in Iran, who wondered what he would do if the roles were reversed: "We’re not that much better than our guards.”

I once read about a man in the company of American soldiers who liberated the Dachau concentration camp from the Germans. Before the liberation, there had been rumours of the terrible atrocities that had taken place within those walls, but none of the Americans were prepared for the shock they experienced when they saw the results of the Nazis’ inhumanity against the Jewish people. Only a few German soldiers remained, and they meekly surrendered. A contingency of American soldiers was given orders to take them to an Allied prison camp. As soon as they were out of sight, though, a round of machine gun fire was heard. A few minutes later the soldiers came back with smirks on their faces, saying, “We had no choice. They tried to escape and we had to mow them down.” It then dawned on the man recounting the story that the inhumanity of the Germans to the Jews had driven his colleagues to do the same back to them, which meant that the cancer of inhumanity was now increased, not diminished.

The attempt to do to evil what evil does to us leads only to an enlargement of evil. The hatred and desire for revenge in Psalm 137 can make otherwise good people do evil things-like bashing babies against the rocks, or killing unarmed prisoners of war, or flying planes into crowded buildings, or shooting an unarmed individual.

How does Psalm 137 speak to us after the execution of Osama bin Laden and the continuing fight against terrorism?

First, Psalm 137 bids us to pursue justice-not an “eye for an eye,” but to embrace the truth in Edmund Burke’s famous maxim that “the only thing it takes for evil to triumph is for good people to do nothing.” There is real evil in the world that can be neither ignored nor denied. In such a world, force may be as necessary as it is tragic, especially where an aggressor threatens our security. While violence is never an option for a Christian, the use of force to repel violence is morally justifiable. Nations and individuals have a right to defend themselves against a violent aggressor.

Second, Psalm 137 warns us that the pursuit of justice must not degenerate into vengeance. The psalmist hated the Babylonians so much that he would dash their babies against the rocks. Our task is more measured-to pursue justice in such a way that avoids the indiscriminate killing of innocent people. If we succumb to the temptation to kill the innocent to get the guilty, then we become no better than those we condemn. We sink to the level of the terrorist in our fight against terrorism. That is why torture and the killing of innocent or unarmed civilians are never justifiable.

Fourth, as I read Psalm 137, I try to realize that today’s enemies can become tomorrow’s friends and allies. We fought two world wars against Germany in the 20th century, but now Germany is our friend and ally in the war against terrorism. Yes, enemies can become friends.

Psalm 137 asks, “Are you so overcome with rage at wrongdoing that you are living out your life yearning only for vengeance? Or are you willing to overcome your rage by opening yourself to dialogue, leaving vengeance to God, pursuing justice and allowing your enemies to become friends?” The choice is ours.