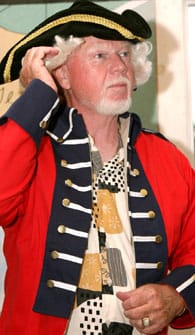 Although CBC broadcaster Don Cherry regularly launches into what might be called arias on hockey, he only made his legitimate opera debut in August at Wolfe Island, Ont., where he has a summer home and is an active Anglican parishioner.

Mr. Cherry was cast in the role of narrator in Molly Brant: A One-Woman Opera by Augusta Cecconi-Bates, a one-act musical play about an 18th-century aboriginal woman who was a leader in both the Mohawk and British communities in the area.

Mr. Cherry, who attends Holy Trinity on the island and was baptized at St. Paul’s Anglican church in nearby Kingston, was passing by St. Margaret’s parish hall where a rehearsal was taking place and stopped in to see what was going on. According to the Kingston Whig-Standard, Ms. Cecconi-Bates told him the narrator’s part had not yet been cast and asked if he’d like to participate.

At a dress rehearsal, he put on his costume — a white ponytailed wig, black and gold tricorn hat and long red jacket — and joked that he could have worn one of the boldly-patterned suits he wears on the air as a commentator on Hockey Night in Canada.