God looking for ‘willingness of our hearts,’ says Arctic bishop 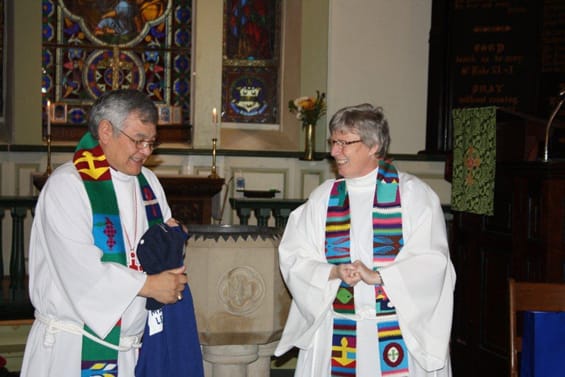 The church was St. Stephen’s–the old stone church in the historic community of Chambly, located in the Montreal South Shore area near the Richelieu River. The hymns included Leonard Cohen’s Hallelujah accompanied by two young men on guitars, and the gospel was the passage from Luke about the tax collector who said, “God, be merciful to me, a sinner.”

The guest preacher was Bishop Benjamin T. Arreak, suffragan bishop for the Nunavik region of the diocese of Arctic, based in Kuujjuaq, Que., formerly known as Fort Chimo.

“God is not looking for perfect things,” he told a congregation of about 50. “He is looking for the willingness of our hearts.” Also in attendance were a few members of the former Church of St. James in nearby St. Jean sur Richelieu.

The bishop was one of more than 42 bishops from across Canada attending an annual meeting of the House of Bishops in Montreal. Some 20 bishops fanned out to as many parishes in and around Montreal as guest preachers at the morning services on Sunday, Oct. 24.

Bishop Arreak received some mementos of his visit, including flowers for his wife Susan-who missed the service to take advantage of a rare opportunity for a visit with a daughter and grandchildren living in Kingston, Ont.-and a painting of the historic church, painted and presented by the Rev. Thomas Ramsey, 88, a former incumbent at St. Stephen’s and now honorary assistant.

The Rev. Eileen Steele, the current priest at St. Stephen’s, presented Bishop Arreak–a fellow fan of the Toronto Maple Leafs–with a Leafs sweater. Her devotion to the Leafs, even though she lives deep in the heartland of the Montreal Canadiens, is a standing joke in the parish.

Steele said local parishes will be looking at other ways to support the diocese of the Arctic, including prayer books from two South Shore parishes and possibly, a financial contribution to rebuilding the “Igloo Church”-St. Jude’s Cathedral in Iqaluit, on Baffin Island, destroyed by fire in 2005.

“The future is up in the air but people all over Canada are supporting us," he said. "We appreciate and thank God for that.”

The bishop said he will spend the next three weeks in Ontario, in the Kitchener-Waterloo area. He has done this twice a year for the last three years. He is one of three members of a team preparing the first complete Inuktitut translation of the Bible–both Old and New Testament. The project has been under way for 32 years.

Previously, he said, there was only a New Testament and it was faulty in some respects, but “it was amazing how God was able to use that translation to reach our people.”

He said his own bond with the Inuit of northern Quebec is an example of how God uses imperfect people with willing hearts. He recalled that when he was first sent to the region as a priest, he had difficulty understanding the dialect of Inuktitut spoken there. “But after 10 years I realized I would have missed something if I had not gone to northern Quebec.”