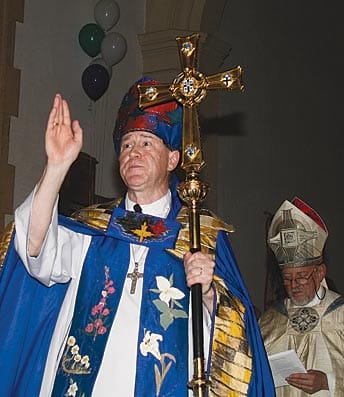 Archbishop Fred Hiltz blesses the congregation at his installation as 13th primate of the Anglican Church of Canada. The former diocesan bishop of Nova Scotia and Prince Edward Island was elected on the fifth ballot, edging out Bishop Victoria Matthews of Edmonton. Behind him is his predecessor, Archbishop Andrew Hutchison.

Winnipeg
General Synod 2007, held June 19-25 in this weather-whipped prairie city, was defined by the issue of human sexuality and by the election of Bishop Fred Hiltz as the 13th primate, or national archbishop, of the Anglican Church of Canada.

In a week of unusually dramatic storms, including tornadoes in a nearby town, the church’s governing triennial convention decided that the concept of saying a church blessing over a gay relationship does not conflict with essential church teachings. Synod then refused to “affirm the authority and jurisdiction” of a diocese to allow it.

The votes were extremely controversial. Clergy and lay delegates approved both measures, but bishops voted for the first and against the second, in each case by a count of 21 to 19.

The election of Bishop Hiltz, of the diocese of Nova Scotia and Prince Edward Island, took five ballots and was a close contest between him and Bishop Victoria Matthews of Edmonton. A soft-spoken man, he said he intends to address the divisions in the church over sexuality, will get to know churches across Canada and deepen the Full Communion relationship with the Evangelical Lutheran Church in Canada (ELCIC).

The Anglican church also greeted its new national native bishop, Mark MacDonald and decided that funding for the assisted northern dioceses – which have significant aboriginal populations – will not be subject to further trimming for the next five years.

Anglicans also sent a message to the international Anglican Consultative Council that adding the primates (national bishops) to the council’s membership would not be a good idea. They agreed to begin a Canada-wide discussion of the church’s governing structures and examine whether they could be more efficient.