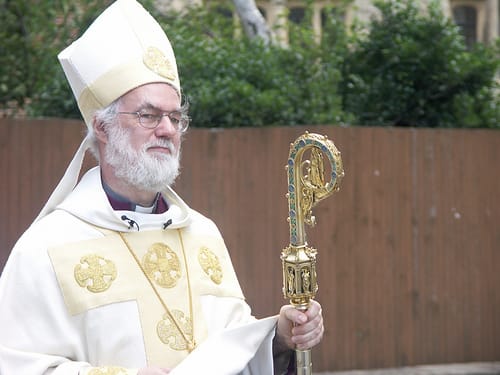 The act of forgiveness is one of humanity’s most deep-seated acts of people nourishing one another as human beings Archbishop of Canterbury Rowan Williams has told a global gathering of Lutheran Christians.

"To forgive and to be forgiven is to allow yourself to be humanised by those whom you may least want to receive as signs of God’s gift but this process is intrinsically connected with the prayer for daily bread," said the leader of the Anglican Communion, when he addressed the highest governing body of the Lutheran World Federation in Stuttgart, Germany, on July 22.

The Anglican and Lutheran communions have close ties in a number of parts of the world. In Europe, it is through the Porvoo Communion. This is a grouping of churches, mostly in northern Europe, that have signed an agreement to, "share a common life in mission and service".

In North America, the U.S. Episcopal (Anglican) Church and the Evangelical Lutheran Church in America have agreements to share the Eucharist. Anglican and Lutheran churches in Canada also have a "full communion" agreement.

The Archbishop of Canterbury is the spiritual head of the Church of England.

In his keynote speech to the once-every-six-years LWF assembly in Stuttgart, Archbishop Williams spoke on the theme of the gathering, "Give us today our daily bread", a part of the Lord’s Prayer.

"When offence is given and hurt is done, the customary human response is withdrawal, the reinforcing of the walls of the private self, with all that this implies about asserting one’s own humanity as a possession rather than receiving it as gift," said Archbishop Williams.

"The unforgiven and the unforgiving cannot see the other as someone who is part of God’s work of bestowing humanity on them. To forgive and to be forgiven is to allow yourself to be humanised by those whom you may least want to receive as signs of God’s gift but this process is intrinsically connected with the prayer for daily bread."

Archbishop Williams added that to forgive has been noted as a sign of humanity, "touched by God – free from anxiety about identity and safety", when people can reach one another, "as God does in Jesus Christ".

Forgiveness involves exchanging, "the bread of life and the bread of truth", the archbishop told his audience.

"Neither the forgiver nor the forgiven acquires the power that simply cuts off the past and leaves us alone to face the future. Both have discovered that their past, with all its shadows and injuries, is now what makes it imperative to be reconciled so that they may live more fully from and with each other," said Archbishop Williams.