By Anglican Communion News Service on May 15, 2012 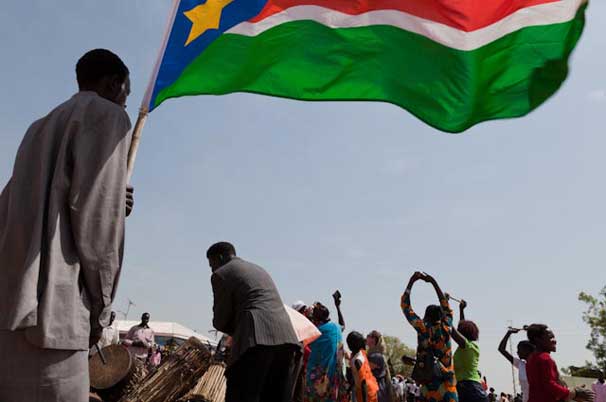 Episcopal and Catholic bishops from South Sudan have said that together they "stand committed to do all in [their] power" to realise an end to war between Sudan and South Sudan.

Following a three-day meeting in Yei, South Sudan, led by Archbishop Paulino Lukudu Loro and Archbishop Daniel Deng Bul, the 14 bishops issued a ‘Message of Peace’ which laid out their hopes and plans for an end to conflict.

Referencing the famous Martin Luther King speech, the bishop’s said: "We dream of two nations which are democratic and free, where people of all religions, all ethnic groups, all cultures and all languages enjoy equal human rights based on citizenship. We dream of two nations at peace with each other, co-operating to make the best use of their God-given resources, promoting free interaction between their citizens, living side by side in solidarity and mutual respect, celebrating their shared history and forgiving any wrongs they may have done to each other.

"We dream of people no longer traumatised, of children who can go to school, of mothers who can attend clinics, of an end to poverty and malnutrition, and of Christians and Muslims who can attend church or mosque freely without fear. Enough is enough. There should be no more war between Sudan and South Sudan!

"Blessed are the peacemakers; they shall be recognised as children of God (Matthew 5:9). We take this very seriously, and we stand committed to do all in our power to make our dream a reality. We believe that the people and government of South Sudan desperately want peace. We believe the same is true of the people and their liberation movements in the Nuba Mountains and Blue Nile. We do not believe, however, that a lasting peace will come unless all parties act in good faith. Trust must be built, and this involves honesty, however painful that may be. We invite the International Community to walk with us on the painful journey of exploring the truth in competing claims and counter-claims, allegations and counter-allegations. We invite them to understand the peaceful aspirations of the ordinary people, and to reflect that in their statements and actions."

The bishops’ document was, however, more than just aspirational, it included calls to both the international community and the nations of South Sudan and Sudan, specifically ones requesting the implementation of UN resolution 20461 and for protection for the marginalised.

The bishops-who welcomed to the meeting England’s Archbishop John Sentamu and The Special Representative of the UN Secretary General, Ms Hilde Johnson-also committed themselves to renewed ecumenical efforts to build peace. "During the civil war the strength of the Churches’ role on the ground and in international advocacy lay in their unity and ecumenical spirit," said the statement, "…since peace came in 2005 the ecumenical project has dwindled.

"The Catholic and Episcopal Churches have much in common in their history, theology and praxis, both are Founder Members of the Sudan Council of Churches (SCC) and both are international institutions with a great deal of influence in the world for the well-being of all. Working together we believe we have much to offer to SCC as it restructures to meet the new reality of two nations, and as it faces new challenges due to the current military and political tensions."

Bishops from the Republic of Sudan were unable to attend the meeting due to the current political situation.