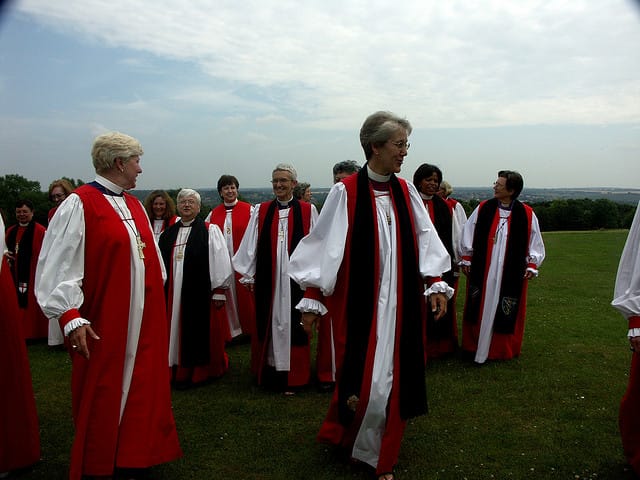 Women bishops at the 2008 Lambeth Conference. The Church of England opened the priesthood to women in 1992, but it has not allowed them to become bishops. Photo: Marites N. Sison

The Church of England may be days away from passing legislation that could enable women to become bishops.

General Synod, the church’s main legislative body, is meeting July 9-13 in York and at least two full days will be devoted to debating and amending an 11-clause measure that deals with the legal requirements for enabling women bishops and outlines provisions for those who will not accept their episcopal leadership.

A measure is a piece of legislation that, once passed by the General Synod, requires approval by the U.K. Parliament.

Of the 40 or so proposed amendments, the ones that have received the most attention are those submitted jointly by the archbishops of Canterbury and York that suggest arrangements whereby two bishops could exercise episcopal functions within the same jurisdiction. Their proposals call for "co-ordinating" the ministry of a diocesan bishop with another bishop who would provide episcopal oversight for those opposed to female bishops.

A Lambeth Palace press release said the amendments would preserve a female bishop’s episcopal authority while providing an alternative for those who are "unable to accept the new situation…" But the archbishops’ proposals have been harshly criticized by supporters of women’s ordination and are widely regarded as concessions to traditionalists.

"If the amendments are passed, the church will be in a position of allowing that it is legally acceptable to recognize that women are bishops — and equally acceptable to insist that they are not," said Christina Rees, a lay member of General Synod, in a July 6 press briefing.

"The damaging and undermining effect this would have on women’s ministries and on the mission and message of the church overall is incalculable," said Rees, former chair of campaign group Women and the Church, or WATCH. The archbishops’ proposals "seem to have been designed to keep a small minority of people in the church rather than to attract those who are not yet part of the church or to do what is right for the church overall at this time."

The Catholic Group in General Synod, made up of traditionalists and members of Forward in Faith, has welcomed the archbishops’ amendments. "We are particularly grateful for their recognition of the need for bishops with jurisdiction in their own right to minister to us, and to all those who share our convictions," the group said in a June statement.

The Rev. Canon Simon Killwick, a General Synod member from Manchester and chairman of the Catholic Group, is submitting an amendment that calls for three new dioceses to be established, effectively as havens for traditionalists opposed to women’s ordination.

General Synod voted in February 2009 to send a draft measure on women bishops to a revision committee so it could rework the legislation.

That draft measure had two principal objectives: "to give the General Synod power to make provision by canon allowing women to be consecrated as bishops; and to set out the legal framework for the arrangements to be made for parishes which, on grounds of theological conviction, feel unable to receive the ministry of women."

The revision committee met 16 times since May 2009 and considered 114 submissions from members of the General Synod, and a further 183 submissions from others. In May 2010, the committee published its 142-page report, which offers a detailed analysis of the draft legislation.

The Church of England opened the priesthood to women in November 1992, five years after women were first ordained to the diaconate.

In the Anglican Communion, formal discussion and debate on women’s ordained ministry began in 1920 when the Lambeth Conference called for the revival of the deaconess order, saying that it was "the only order of the ministry which we can recommend that our branch of the Catholic Church should recognize and use."

The first woman priest in the communion, Li Tim-Oi, was ordained in 1944 in Hong Kong. In 1974, there was an "irregular" ordination of 11 women in the U.S.-based Episcopal Church, which officially authorized women’s priestly ordination two years later.

Bishop Barbara Harris, now retired suffragan of Massachusetts, became the Anglican Communion’s first woman bishop at her consecration in 1989. The Rev. Canon Nerva Cot Aguilera became the first female Anglican bishop in Latin America when she was consecrated bishop suffragan of the Episcopal Church of Cuba in June 2007.

In the Church of England, more than 5,000 women have been ordained as priests since 1994 and today they represent nearly 40 percent of all clergy. But Rees lamented that if the legislation passed in General Synod in 1992 "that made it possible for women to be priests had not also explicitly made it illegal for women to be bishops, it is certain that there would have been a number of women serving as bishops in the Church of England for the past decade."

Assuming all stages of the legislative process proceed without delay, "it will be at least another two years before the mind of the Church of England can be determined at the final approval stage," the Church of England bishops said in a May statement. Since the measure also would require parliamentary approval, the first woman bishop could not be consecrated until at least 2014.

Parliamentary approval is required because the measure effectively changes English law as the Church of England is an officially established Christian church with Queen Elizabeth II as its supreme governor.

Throughout the weekend, prayer vigils for the women bishops legislation are being held at cathedrals in Ripon, Newcastle and Guildford bringing together people from across the spectrum of opinion.