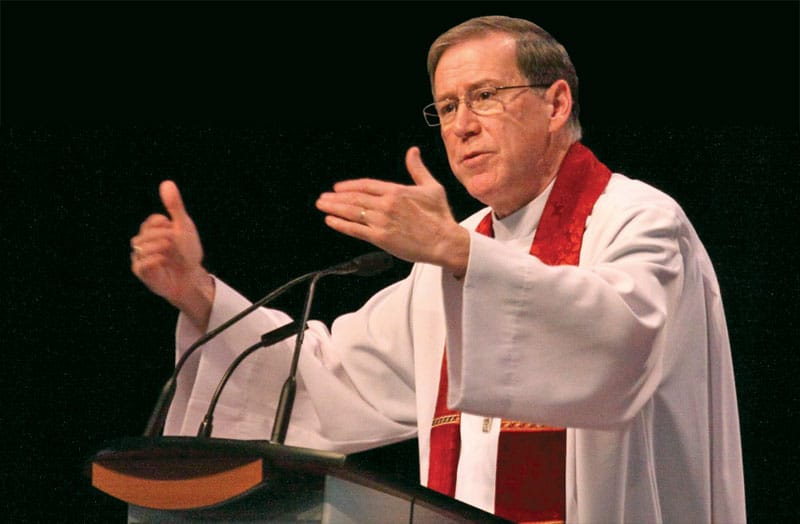 ‘I BELIEVE the Spirit of God has presided at this synod.’ -Archbishop Fred Hiltz Photo: Art Babych

General Synod 2010 did not approve the so-called local option that would allow dioceses to grant same-sex blessings. Neither did it take a legislative decision on the matter.

It did, however, recognize that local option has been exercised by some and may be taken by others in future, even though “it’s not local option approved by the national church…,” said Archbishop Fred Hiltz, primate of the Anglican Church of Canada.

“We’re not ready as a national church to say, ‘We’re building this into our doctrine that we approve of same-sex unions,’ ” he told a press conference following the close of General Synod 2010 in Halifax. What synod did say was, “We need to have more conversation,” confirmed Archbishop Hiltz, adding, “That’s an action.”

The report on sexual discernment, finalized after a series of discussions by members, acknowledges “diverse pastoral practices as dioceses respond to their own missional contexts.” The report also acknowledged “the continuing commitment to develop generous pastoral responses” to gay and lesbian members of the church.

The statement recognizes the reality of the Anglican Church of Canada right now, said Archbishop Hiltz. “We’re not in a position to be going back to dioceses where they’ve made decisions one way or the other, to say, ‘You must change your mind on this.’ “

Archbishop Hiltz called the synod’s acceptance of the report a “watershed moment” for the life of the church and its place in the worldwide Anglican Communion. “There’s been healing in this church,” he declared. “We’re no longer demonizing one another….We’re regarding one another differently…more patiently, more graciously.”

As he stood in line to say goodbye to synod members, the primate said a majority expressed that they had “so much more hope” for the church and were “proud to be Anglican.”

“I believe the Spirit of God has presided in this synod, as we have taken counsel over contentious issues, particularly around the blessing of same-sex unions.” Ω