By Anglican Journal on September 1, 1999 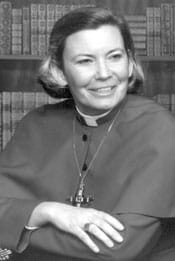 The Diocese of Edmonton has had some rough sailing over the past few years, but with determination and a dose of optimism, its 59 congregations have weathered the storms.

But about a third of churches in the diocese face extinction if their congregations aren’t willing to welcome and include those who are not lifelong Anglicans, said Rev. Keith Denman, parish priest at All Saints’, Drayton Valley and St. Paul’s, Evansburg.

Mr. Denman has been in Alberta for the past eight years.

He says the diocese is facing 2000 knowing that some changes will have to be made to ensure the long-term viability of some of its parishes, especially those that have traditionally resisted change. Economics will dictate what will happen, he said, but geographic factors will also play a part – the diocese covers about 78,000 square kilometers.

“Unlike some dioceses, we don’t have the option of simply combining parishes,” he said. “Many of the congregation are scattered throughout the diocese. In most cases, parishes are about 100 km from each other, so merging them isn’t really an option.”

In her charge to synod in April of this year, Bishop Victoria Matthews said some parishes are experiencing “isolation and exhaustion.” To help, the diocese has set up a ministry of accompaniment to share liturgical resources in far-flung parishes.

“The bishop is working hard to ensure that progress will happen in the rural areas. It’s not hard to see why many rural areas have the sense that all the good things happen in the urban areas,” said Mr. Denman. “And then they look around and see very few people in church on a Sunday. Many are just at or just below the point at which they can afford to have a full-time priest. So, it has been one of the bishop’s priorities to see that they get more resources and not just to leave them floundering.”

While churches in urban areas, like Drayton Valley, might have more economic resources, members of their congregations are often too busy to participate fully in church life.

Mr. Denman said that with an economy tied so closely to the fortunes of the oil and gas industry, boom and bust cycles are a constant part of the diocese’s urban landscape.

About five years ago, he said, “the diocese hit the wall financially – we ran out of money, really – cheques were starting to bounce all over the place. There were a number of angst-filled meetings with clergy and wardens, and money had to be borrowed to get us through the crisis. It took us about three years to get back on our feet financially and I think there are a lot of people still very gun-shy about starting new things.”

(Part of the problem was that the then bishop, Kent Clarke, who was the region’s archbishop, was forced to resign in 1987 because of alcoholism.)

On a parish level, it means people take a cautious approach. For example, when All Saints moved into its new church building two years ago, the building was paid for by move-in day. Being in debt was just too terrifying.

“When times are good, as they are right now, people have a lot more money, but they don’t have a lot of time,” he said, adding that a lot of the average $60,000 household income in Drayton Valley is made by those doing unpredictable contract work. “They are working every chance they get – so they aren’t as available for weekday church programs and you can’t always count on them being there on Sundays, either.”

While life might be somewhat chaotic for his parishioners, Mr. Denman said most have chosen to become part of the Anglican Church – and that holds true for several other parishes in the diocese.

Part of that is intentional – in this part of Canada, fundamentalist churches make up the lion’s share of Christian worship – so the Anglican churches that wanted to grow had to reach outward by offering things like Alpha courses and Cursillo programs to reach the wider community.

“The feeling used to be that if you weren’t Anglican, that was your own fault. We were here and people came to us,” said Mr. Denman. “Now, we are being much more energetic and enthusiastic about our faith and sharing it with others. Churches willing to do that will grow.”

To maintain that growth, the bishop is also renewing the emphasis on ministry to youth and children.

“I don’t believe we are succeeding in communicating Christian faith. The fault isn’t with the parishes or the children’s parents, or the church school curriculum alone, but a combination of all three,” Bishop Matthews told synod. “There is virtually nothing left in society that supports and encourages a young person to become, let alone continue, as a disciple of Jesus Christ. I don’t believe the task is impossible, but I do believe we need to make Christian education a priority for our life as a diocese.”

Mr. Denman credits Bishop Matthews for both her keen support of ongoing training and preparing clergy and laity for ministry and her ability to help parishes identify problem areas and develop improvement plans. But he says some parishes are finding the situation difficult. “Some would rather die than change.”

Nancy Devine is a freelance writer and editor living in Aurora, Ont.