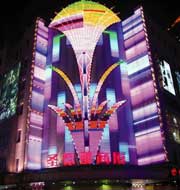 We are a delegation of 11 – four from the Anglican Church of Canada, four from the Presbyterian Church in Canada and three from the United Church of Canada – visiting Shanghai, Nanjing, Kunming and Beijing at the invitation of the China Christian Council. Only three of us have been to China before. It is a country with more than 5,000 years of history and the excitement is palpable. Most aren’t sure what to expect; people are often told that everything in China, (even the weather we find out) is complex and unpredictable.

It is muggy when we arrive late afternoon at Shanghai’s bustling Pudong International Airport. We are exhausted but eager to check out Shanghai – the city with a bohemian past; the so-called “Paris of the Orient” where in the roaring 1920s and 1930s the lifestyles of the idle rich, playboy tycoons, gangsters, taxi dancers, opium traders, travelers, con artists, adventurers and missionaries were almost stuff of legend. All the city’s “sins” were obliterated after the Communist takeover of 1949.

Today, of course, the story that Shanghai has shed its Communist past is no longer new. Still it is a shock to see the mammoth buildings that dot the city centre. With a population of 16 million (half the population of Canada!), it’s easy to see why even condominium buildings must stab the sky. Our hotel – the YMCA, built in 1929 using traditional Chinese architectural design – is dwarfed by gigantic new buildings and malls with neon signs rivaling Las Vegas.

The shops here don’t close until 10 p.m. and tourists join the throng of locals who know the meaning of shop ’til you drop on Nanjing Road – a spectacular five-kilometre street that’s closed to vehicular traffic. The young – trendy in stilettos or chunky boots – sip lattes in Starbucks, join the long queue at Pizza Hut to meet friends, or try on the latest Chanel and Dior accessories in malls that sell nothing but haute couture.

“I had heard that China was growing fast but I was surprised by the First World characteristics of Shanghai and Beijing,” said Ron Wallace, associate secretary of the Presbyterian Church in Canada’s international ministries.

That’s not to say that Shanghai has completely shed its past. It has a sophisticated underground subway system but bicycles remain the king of the road here as they are elsewhere in China. Crossing the street here is suicidal – there are traffic lights but no one pays mind and pedestrians have to look to the left, right, front and back before running for their lives.

The tempo in Shanghai can be dizzying and not just for visitors. Change has happened at such a rapid pace that even locals, we are told, are experiencing anomie. Disorientation is greater for migrant workers – China’s rural poor who flock to urban areas like Shanghai hoping to get some piece of the action but instead find themselves shunted to the streets, watching an increasingly affluent world pass them by. In Shanghai you can easily find someone who earns $6,000 a month and another, a measly $6. This Communist country is showing the strains of vicious capitalism with the growing gap between the rich and the poor and the gradual erosion of safety nets. We see some homeless camping for the night on the streets; workers in ill-fitting clothes (some in padded peasant clothes once institutionalized by Mao) walk side-by-side with professionals in sleek suits.

An increasing number of Chinese seek comfort not just in Christian churches – registered or otherwise – but other officially recognized faiths like Buddhism, Daoism and Islam. (Registered churches are those run by the China Christian Council, are registered with the government’s Religious Affairs Bureau and are therefore, legal. Others called “house churches” and “underground churches” refuse to register and are deemed illegal. Some Christians straddle between these two churches.)

Rev. Shen Cheng-en is pastor of the Shanghai Community Church, the largest Christian church in the city, which has 3,000 members. He ministers to a church located in an upscale area of Shanghai (where foreign consulates and quarters are located and trees, all but lost in the downtown core, are still bountiful) and says among the petitions he hears are from locals who are lonely and want to fill a spiritual yearning. Some are unemployed.

The church – which had been turned into a towel factory during the 1966-1976 Cultural Revolution – is packed on Sunday when we attend the first morning service. There are headsets that translate the Chinese service into English for the benefit of expatriates who attend regularly.

Before the service starts, a few women kneel at the altar, praying earnestly. The children are in another wing, attending Bible school. A crowd of about 50 attend the service via a video monitor in another room – it is a familiar scene in other churches where there aren’t enough seats to accommodate a growing number of worshippers.

People sit quietly in pews clutching their Bibles before the service. It’s a matter of pride for people to hold a Bible – they bring their own to church, by the way.

During the service the mixed crowd of young and old, men and women, participate enthusiastically – whether in the singing or recitation of prayers. They take church seriously here.

Note: This account would not be complete without mentioning the Chinese acrobatic circus show we were taken to on our final night here. The finale – a heart-stopping, death-defying act where seven acrobats (six men, one woman) in motorcycles performed stunts and raced inside a 6.6-metre diameter steel ball was enough to convince me of one thing – the Chinese have and will always be known for pushing the envelope.