Home » Current financial crisis is a moral one, says Tutu

Current financial crisis is a moral one, says Tutu 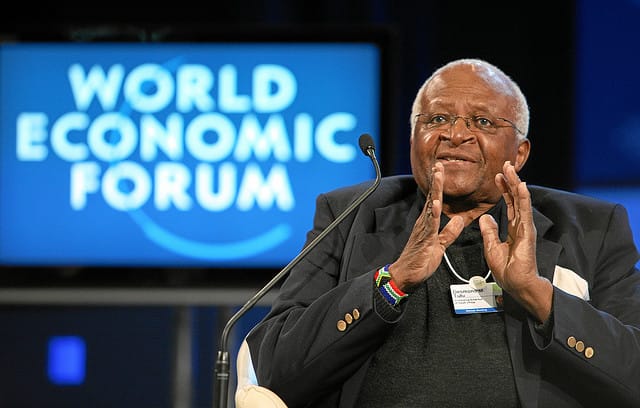 Cape Town
The end of the Cold War led to the false hope that all humans would be treated equally, says Archbishop Desmond Tutu.

But the world’s inability to avoid crises such as the recent recession, climate change and volcanic ash illustrates the risk of not working together, the Nobel Peace Prize laureate and former Anglican archbishop of Cape Town said.

"The countries most responsible for devastating changes are the least vulnerable to the consequences, of which the price is being paid by the poor and the weak," he said.

"We all have just one world … Unless we work out a way to live together, we will end up at the bottom of the pit together," Tutu said.

Solutions to the ongoing economic crisis will only be found in the faith communities, Tutu said while noting, "More than political will, the moral imperative is lacking; we realize more and more [the global financial crisis] is a moral and ethical matter."

Tutu was speaking at the handing over last week of a report on globalization by Uniting Reformed Church of South Africa theologian the Rev. Allan Boesak, and the Rev.  Johann Weusmann of the Evangelical Reformed Church in Germany titled Dreaming a Different World.

The Evangelical Reformed Church in Germany in 2007 embarked on a project to study the effects of globalization in the context of the Accra Confession, a 2004 statement of the then World Alliance of Reformed Churches that critiqued neoliberal economics. The German church worked with the church in South Africa to gain the perspective of a developing country.

Much of the "very activist" report, as Boesak described it, is devoted to economic issues, and is explicitly meant as ammunition in what is seen as the battle against the domination by a  financial elite using "empire logic."

Just as Christ rose up against the Roman empire, it is the duty of Christians to resist the "lordless powers" of the global capitalist empire, the report says. It looks at issues such as the global food crisis, financial markets, ecology and militarism. It sets out a detailed programme for "breaking the dominance of financial markets over the real economy."  The report distinguishes between globalization and globalism.

"Globalization is an historical, rational phenomenon, the product of technological, civilizational development. It inaugurates a new phase in our history, presenting humanity with immense challenges, but working for the larger socio-economic virtue.