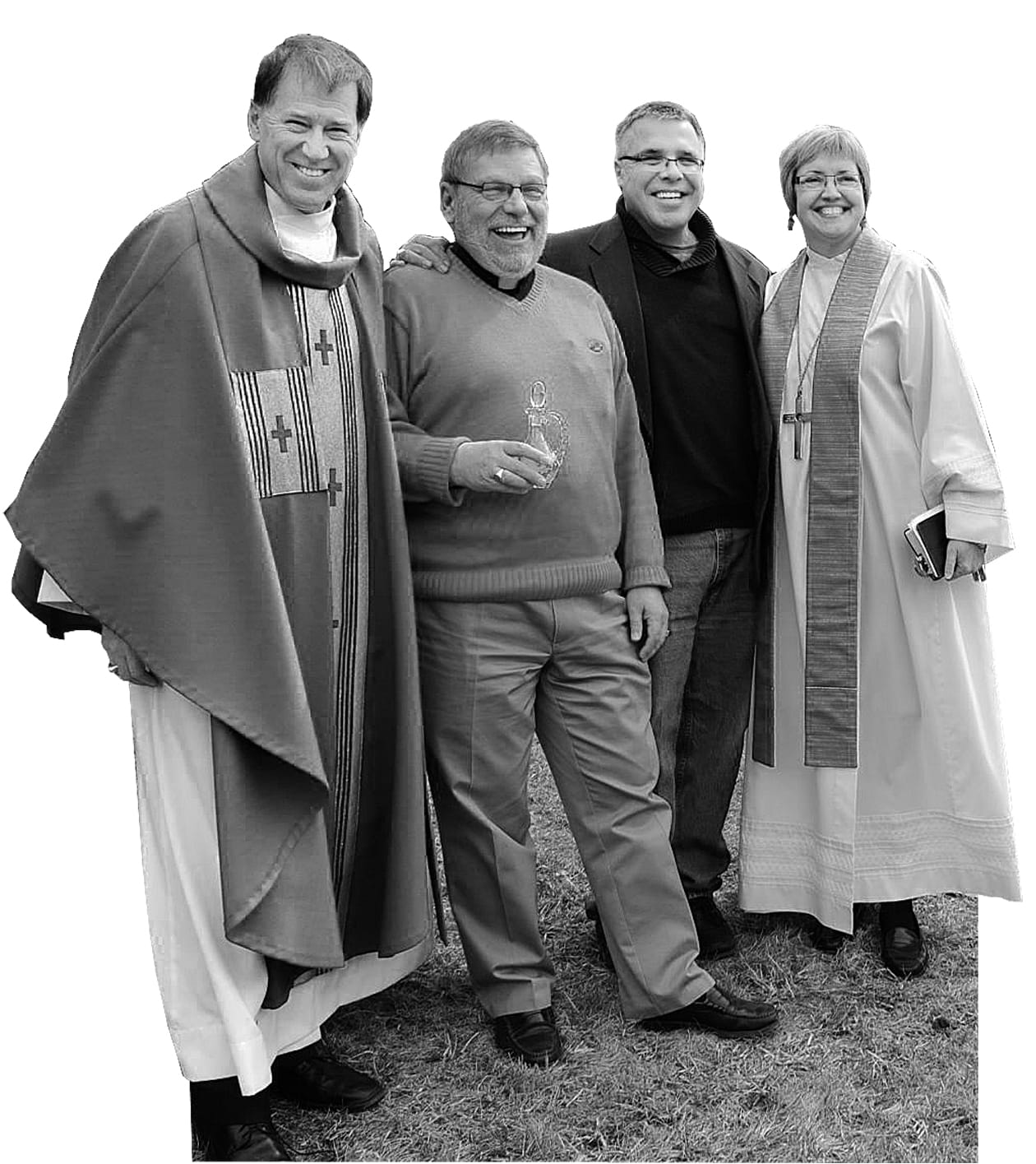 The following news updates are taken from reports filed by Marites N. Sison from the first joint meeting of the Council of General Synod (CoGS) and the ELCIC’s National Church Council (NCC), Mar. 31-Apr. 3. Complete stories are available at anglicanjournal.com. See photos and videos on the Journal’s Facebook page.

‘An absolute joy to behold’
The executive councils of the Anglican Church of Canada and the Evangelical Lutheran Church in Canada (ELCIC) began their first joint meeting with Archbishop Fred Hiltz (left), calling the gathering “an absolute joy to behold.” Standing with the primate are, from left: Dean Peter Wall, co-chair of the Anglican-Lutheran Commission, Bishop Michael Pryse of the ELCIC’s Eastern Synod is also co-chair of the commission, and ELCIC National Bishop Susan Johnson.

The board recommended the move to un-incorporate the newspaper after “careful deliberation,” said Bishop Elliott. In a written report to CoGS, he expressed a number of concerns. Chief among these was the future of funds from revenue-generating strategies.

“…It is hoped the [Journal] would have the support and freedom to pursue its future plans and that any surpluses will be used for the current purpose…of the [Journal] rather than being diverted to other ministries of General Synod,” said Bishop Elliott, adding: “This is no small concern.”

The Anglican Journal was separately incorporated from General Synod in 2002 so it could continue publishing should the national church be forced into bankruptcy following Indian residential school litigation.

‘Just the beginning’
In the view of the Anglican Council of Indigenous Peoples’ (ACIP), reconciliation of the Indian residential schools’ experience requires “confession and apology, examination and fearless moral inventory, making amends, and walking together in newness of life.”

This message was delivered to CoGS by National Indigenous Anglican Bishop Mark MacDonald, who noted that this process cannot be rushed.

Anglican-Lutheran collaboration gets a B+
Anglicans and Lutherans in Canada get a B+ for having the will to engage with each other and for the “intentional collaboration” of their leaders. However, there’s still work that needs to be done to live up to commitments outlined in The Waterloo Declaration, according to the Joint Anglican-
Lutheran Commission. Ten years ago, the declaration sealed Full Communion between the Anglican Church of Canada and the Evangelical Lutheran Church in Canada’s (ELCIC).

The commission also noted a need to develop a “bold and tough agenda” for the future.

Shared office gets mixed reviews
The idea of a shared national office, possibly located in Ottawa, for the Anglican Church of Canada and the Evangelical Lutheran Church in Canada (ELCIC), is receiving mixed reviews. Archbishop Fred Hiltz said leadership may need to “step back” and consider the benefits more carefully.

At present, the national office of the Anglican Church of Canada is located in Toronto; the ELCIC is headquartered in Winnipeg.

The idea, based on thinking that moving to Ottawa might allow the churches to engage with the federal government directly on issues of mutual concern, particularly social justice, was met with some skepticism at CoGS. “We can engage government with our current structures; we don’t need a translocation of staff,” was the response of one group following discussion.

Archbishop Hiltz said a cost analysis of relocating both churches has not been completed.

General synod balances its budget
General Synod came in on budget for 2010 and anticipates a balanced budget for 2011-a year ahead of the target date for zero deficit, 2012, said treasurer Michele George.

“We have done very, very well,” George told members of the Council of General Synod (Cogs) at its spring meeting. General Synod ended 2010 with a deficit of $490,000, slightly below the budgeted amount of $492,000.

Staff cuts and restructuring, bequests and reductions in the costs of meetings, travel and some programs made it possible to stick to the deficit ceiling, said George. These factors will also make for a balanced budget and a small surplus of about $12,000 to $14,000 by 2011.

“The plan is to continue” having a balanced budget, said George, but “that depends on our ability to raise revenues.”

Annual contributions from the church’s 30 dioceses (which constituted more than 65 per cent of the budget in 2010), as well as revenues from the resources for mission department (formerly department of philanthropy), are key, she said.

Diocesan contributions were down one per cent in 2010, and although the resources for mission department’s planned-giving program yielded generous bequests, Anglican Appeal, the church’s annual fundraising program, was down, said George.

Changes at national office
General Synod is in a time of “great transition,” said Archbishop Hiltz, who announced a number of staff appointments, effective immediately.

Vianney (Sam) Carriere has been appointed director of the Anglican Church of Canada’s department of philanthropy. Carriere will maintain his portfolio as director of communications and information resources (CIR) for General Synod, said Archbishop Hiltz.

Beverley Murphy, circulation manager for the Anglican Journal, has been appointed to a newly created position as senior manager of CIR. The name of the philanthropy department will change to “resources for mission.”

In addition, Suzanne Lawson has been appointed to the half-time position of national campaign liaison and two other positions will be added to the resources for mission department: diocesan services co-ordinator and stewardship education co-ordinator.

In other news…
The Silent Night Project has so far raised $50,000. The project had asked Canadian Anglicans to record “Silent Night” and contribute a toonie ($2) each to support the Anglican Military Ordinariate, which ministers to the needs of women and men of the Canadian Forces.

Dean Peter Wall, diocese of Niagara and co-chair of the Joint Anglican-Lutheran Commission, has been appointed chair of the 2013 General Synod Planning Committee.

Guidelines for Anglican and Lutheran clergy/rostered ministers serving appointments in each other’s churches were adopted.