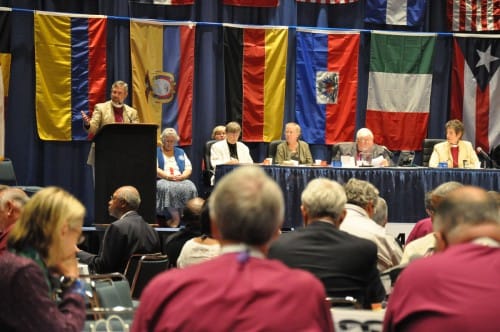 Indianapolis — The House of Bishops concurred with the deputies July 10 to affirm their commitment to building relationships across the Anglican Communion, especially through the Continuing Indaba program, and to decline to take a position on the Anglican Covenant.

After considering eight resolutions, the General Convention’s committee on world mission recommended adoption of two resolutions on Anglican Communion relationships and the Anglican Covenant, a document that initially had been intended as a way to bind Anglicans globally across cultural and theological differences.

Connecticut Bishop Ian Douglas, chair of the World Mission Committee, told ENS following the vote that the resolutions are “a genuine pastoral response because we are not of one mind, and to push a decision at this time would cause hurt and alienation in our church on both sides and instead we chose to stay in the conversation.”

Resolution B005 portrays the decision not to take a position on the covenant as “a pastoral response to The Episcopal Church.”

The resolution acknowledges that, following extensive study and prayerful consideration of the Anglican Covenant, there remains “a wide variety of opinions and ecclesiological positions in The Episcopal Church.”

It also calls for the presiding bishop and the president of the House of Deputies to appoint a task force “to continue to monitor the ongoing developments with respect to the Anglican Covenant and how this church might continue its participation.” That task force would report its findings to the next convention.

In both houses, an amendment to remove the section that declines to adopt the covenant, as well as to set up a task force, was defeated.

The Rev. Mark Harris, deputy from Delaware and a World Mission Committee member, told the deputies that he came to convention wanting to say no to the covenant. “[But] this is not about our wants but what we need … We need a place where we can continue to listen to the wide divides across the Anglican Communion,” he said. “Why must we provide an answer now…when we are in a massive effort to re-envision and restructure the church? We don’t need more division.”

Deputy Jack Tull of Florida, a member of the World Mission Committee, had submitted an earlier resolution (D006) that called on the church to decline to adopt the covenant “as I did not want to see us expend any more energy on this. But coming here has shown me and other committee members the proper approach to take. That insight is reflected in this resolution.”

Council has been studying the covenant progress for the last six years, most recently through its D020 Task Force (called for in Resolution D020 from the 2009 meeting of convention). That task force recommended, and council agreed, in October 2011 to submit a resolution (A126) to this meeting of convention that would have convention state that the church is “unable to adopt the Anglican Covenant in its present form.”

B005 expresses the convention’s gratitude to “those who so faithfully worked at producing and responding to the proposed Anglican Covenant.”

Resolution B005 initially was submitted by Douglas. The original language encouraged the church to embrace the preamble and first three sections of the four-section Anglican Covenant. This, Douglas told ENS prior to convention, would ensure that the church does not remove itself from the ongoing covenant process.

The document’s fourth section, which outlines a disciplinary method for resolving disputes in the communion, has been the covenant’s main sticking point.

Resolution D008, also proposed by world mission, has been revised from the original legislation proposed by the Rev. Tobias Haller, a deputy from New York. Neither Haller’s nor the current version specifically mentions the covenant, but the original was modeled on legislation adopted by several Church of England dioceses that have opposed adopting the covenant.

The resolution calls on the church to “deepen its involvement with communion ministries and networks using where applicable the Continuing Indaba process: conversations across differences to strengthen relationships in God’s mission” and encourage dioceses, congregations and individual Episcopalians to educate themselves about the Communion and “promote and support the Anglican Communion and its work.”

Haller serves on the Continuing Indaba reference group alongside representatives from Africa and the United Kingdom. He said the program is “catching fire and inspiring people around the communion. It’s now being explored as a way for parishes within dioceses to spend time with one another and to learn from one another. Continuing Indaba will be the lifeblood and breath of the Anglican Communion.”

Deputy Josephine Hicks from North Carolina, a member of convention’s World Mission Committee, endorsed the Continuing Indaba program, which is facilitating ways of enabling Anglicans to learn from one another and communicate across different contexts. “We heard on the committee a resounding support for maintaining relationships in the Anglican Communion,” she said.

Hicks, who serves as the Episcopal Church’s lay member on the Anglican Consultative Council, the communion’s main policy-making body, said that it’s important for the Episcopal Church to continue to be a part of the various councils of the Anglican Communion because that is “where relationships are forged, where our voice can be heard, and where we have the chance to dispel inaccurate perceptions.”

Some deputies said that the Episcopal Church does not need pieces of paper, such as the Anglican Covenant, to be in relationship.

The resolution celebrates “the great blessing of the Anglican Communion in its diversity within community as autonomous churches in relationship bound together in our differences in service to God’s mission.”

It also states that the Episcopal Church will “hold fast and reaffirm our historic commitment to and constituent membership in the Anglican Communion” as expressed in the preamble of the church’s constitution, and that it would “maintain and reinforce strong links across the communion” committing itself to continued participation in its councils.

Douglas told the bishops that the resolution “gives gratitude for diversity of churches, celebrates relationships across differences, reaffirms our membership in the Anglican Communion, promises ongoing participation in the councils of the communion, and also lifts up and supports the good work that our church and other churches have been doing in the Continuing Indaba and commits us to educating our own so that we can deeper support the Anglican Communion.

Throughout the Anglican Communion, seven provinces have approved or subscribed to the Anglican Covenant. They are Ireland, Mexico, Myanmar, Papua New Guinea, South East Asia, Southern Cone of America, and the West Indies.

In March, it became clear that the Church of England could not adopt the covenant in its current form when a majority of its dioceses voted the document down.

The Anglican Church of Southern Africa has adopted the document pending ratification at its next synod meeting later this year.

The Church in Wales last April gave the covenant “an amber light, rather than a green light.” The church’s governing body said it feared the recent rejection of the covenant by the Church of England jeopardized its future and clarifications about that were now needed before a decision could be made. It sent questions on the matter to the Anglican Consultative Council, the church’s main policy-making body, which meets later this year.

PrevPreviousSame-sex blessing recommended for provisional use in U.S.
NextReaction mixed to approval of same-sex ritesNext