Home » Same-sex blessing recommended for provisional use in U.S.

Same-sex blessing recommended for provisional use in U.S. 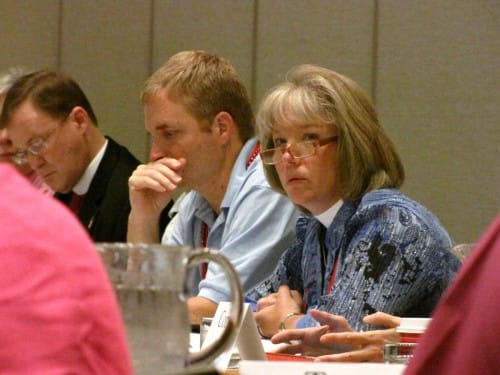 Committee member the Rev. Ruth Kirk, deputy in the Diocese of Delaware, said she supported adding the conscience clause “in the spirit of generosity.” Photo/Sharon Sheridan

Indianapolis -The Episcopal Church’s General Convention Prayer Book, Liturgy and Church Music Committee approved Resolution A049 to authorize for provisional use of “The Witnessing and Blessing of a Lifelong Covenant” beginning the first Sunday of Advent. The resolution now goes to the House of Bishops for action.

The rite, subtitled “Liturgical Resources for Blessing Same-Sex Relationships,” is part of “Liturgical Resources I: I Will Bless You, and You Will Be a Blessing,” developed by the Standing Commission on Liturgy and Music. Congregations and clergy could use the liturgy with their bishops’ permission.

The amended resolution includes a provision that conscientious objectors or supporters of the liturgy not be penalized.

“The resolution asks the General Convention to authorize the liturgy for provisional use and calls for a review process before the next General Convention in 2015. This is clearly a work in process, and there is a place in that process for all Episcopalians, whether or not they agree with the action we are taking today,” Deputy Ruth Meyers of Chicago and Vermont Bishop Thomas Ely, chairs of the subcommittee on blessings, said in a press release. Meyers is chair of the SCLM.

The committee specified “provisional use” rather than “trial use” because the latter refers to prayer book revisions.

The resolution calls for SCLM to study further “how the blessing of lifelong, committed same-sex relationships relates to Christian theology and Scripture, and to reflect on the matter with our sisters and brothers throughout the Anglican Communion and with our ecumenical partners,” they said.

The committee amended the resolution to specify that Canon I.18.4 would apply, giving clergy the discretion “to decline to [preside at any rite of blessing defined herein].”

It also specifies that “no bishop, priest, deacon or lay person should be coerced or penalized in any manner, nor suffer any canonical disabilities, as a result of his or her conscientious objection to or support for the 77th General Convention’s action with regard to the Blessing of Same-Sex Relationships.”

The Very Rev. David Thurlow, deputy of the Diocese of South Carolina, proposed the “conscience clause,” which he modeled after language used in the Port St. Lucie clause. That clause was named after the Florida city in which the House of Bishops enacted a “mind of the house” statement in 1977 establishing that “no bishop, priest, or lay person should be coerced or penalized in any manner” for opposing or supporting the 1976 General Convention decision to ordain women.

Diocese of Springfield Bishop Daniel Martins said that those in the “increasingly isolated theological minority would be greatly comforted” by the added clause.

The Rev. Kevin Matthews of the Diocese of North Carolina expressed concern that using the Port St. Lucie language “will be inflammatory in the other direction.”

The Rev. Ruth Kirk, deputy of the Diocese of Delaware, said she supported the amendment “in the spirit of generosity.”

“I think it adds a level of comfort to those who feel persecuted in the church,” she said.

Although the amendment passed, Thurlow later voted against A049, saying that he “in conscience cannot agree with this, and I want that to be clear.” He will write a minority report to go with the resolution.

The committee decided not to include language allowing for the rite to be adapted for other pastoral situations, which could be interpreted to include some opposite-sex relationships.

– Sharon Sheridan is a member of the Episcopal News Service team at General Convention.