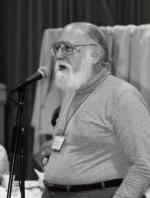 Canon Fletcher Stewart, speaking to a 1997 meeting in Ottawa of the Canadian Council of Churches.

Canon Fletcher Stewart is leaving Henry Budd College for Ministry in The Pas, Man., after 11 years as president to move to Winnipeg, reacquaint himself with his wife, Pat, and return to parish life. The couple has been separated by a distance of about 600 km for five years, said Canon Stewart in an interview. “We phone a lot during the cheap hours and I get down there every couple of weeks,” he said.

Ms. Stewart has been working as a nurse, teacher and administrator, he said, and he has remained at Henry Budd College to shepherd the school’s first candidates for the master of divinity (MDiv.) degree. “That was my vision,” he said of his efforts to implement the MDiv. degree program as an extension course from Vancouver School of Theology. “I wanted to have people qualified to do the teaching as well as the learning,” he said.

The 22-year-old college, named after the first aboriginal person in the Americas to be ordained to Christian ministry, trains native Canadians in lay and ordained ministry.

Archdeacon Lydia Constant will be acting co-ordinator (the title of co-ordinator recently replaced the title of president) after Canon Stewart moves to Winnipeg on Feb. 1 and the diocese of Brandon will be undertaking a search for his successor, he said.

Canon Stewart, who is 60, has accepted a post as interim minister at St. Stephen’s church in Winnipeg for a year while the parish searches for a permanent rector. “It will be an adjustment, but I enjoy parish life. I’ll be using the same skill set, but the routines will be very different. I enjoy city life. I enjoy family life,” he said. Two of the Stewarts’ three children, a daughter and a son, live in Winnipeg, as do three of their four grandchildren. Another son lives in Iceland.

Since he is five years from retirement, he thinks he could fill another interim post after St. Stephen’s, but doesn’t think a permanent position lies in his future. He is, however, still part of a national group of Anglicans who work for social justice called the Magnificat Network. “We have a newsletter that helps put people in touch with one another on the issues,” he said.