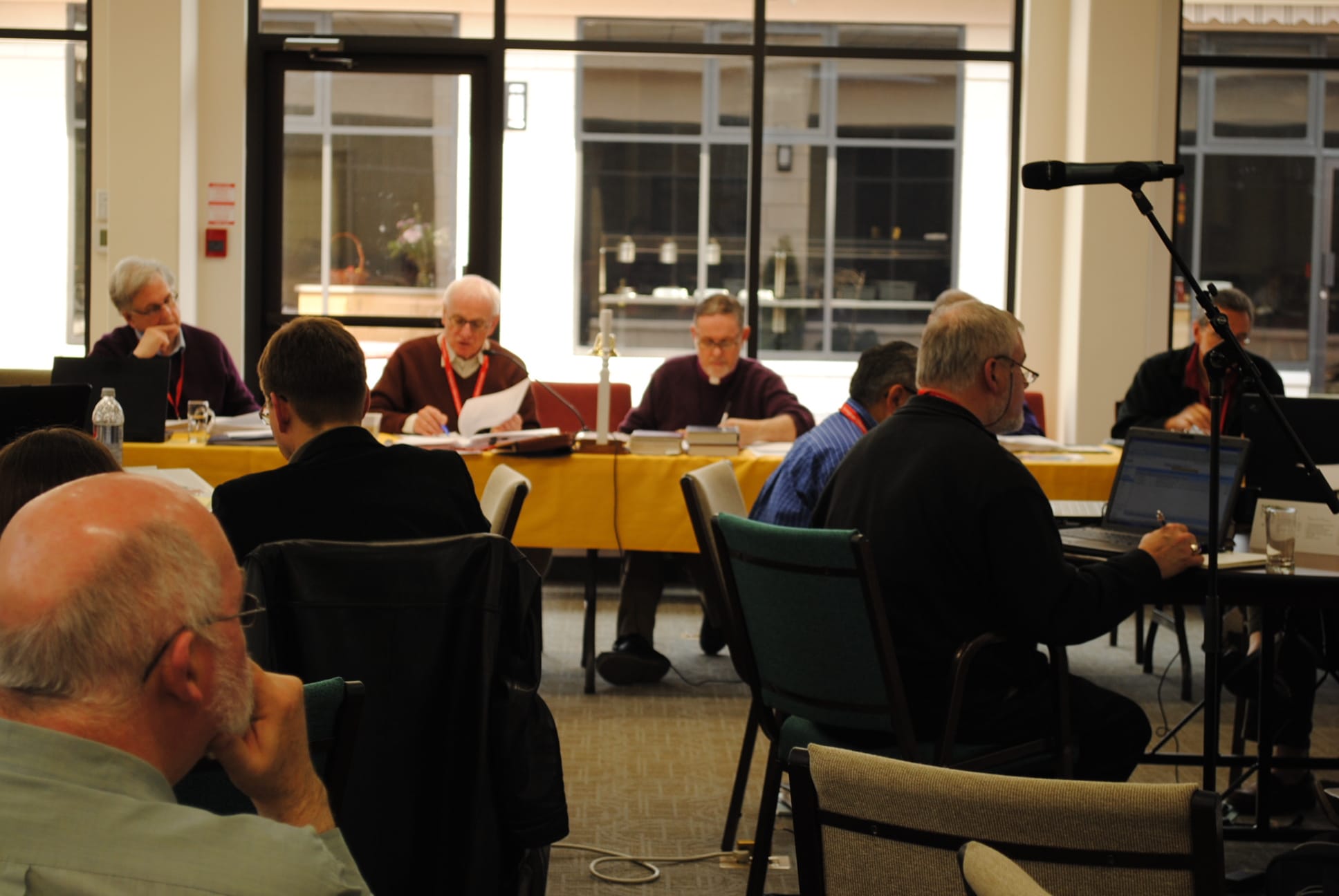 The Journal Board recommended the move to un-incorporate the newspaper after “careful deliberation,” its chair, Bishop George Elliott (center) tells CoGS members.

(Note: New information has been added to paragraph 11 of this story.)

Mississauga, Ont.
On April 1, the Council of General Synod (CoGS) approved a motion to un-incorporate the Anglican Journal, the national newspaper of the Anglican Church of Canada.

COGS also passed a resolution allowing the Journal to apply to foundations for funding.

Bishop George Elliott, chair of the Anglican Journal Board, explained that the move to dissolve the corporation of the newspaper has come from the management of General Synod. The reason given was cost savings ranging from $30,000 to $100,000, he said.

The Anglican Journal was separately incorporated from General Synod in 2002 so it could continue publishing in the event the national church was forced into bankruptcy following Indian residential school litigation. Nine years later, “the threat has dissipated,” said Bishop Elliott.

The Journal Board recommended the move to un-incorporate the newspaper after “careful deliberation,” said Bishop Elliott.

In a written report to CoGS, he expressed a number of concerns about the impact of bringing the national newspaper back under the jurisdiction of General Synod. Chief among these concerns was the future of funds from revenue-generating strategies that are part of the Journal’s five-year business plan to reduce financial dependence on General Synod. The plan, which he called “bold” and “outward-looking,” was presented to the Anglican Journal Board in February.

“…it is hoped that the (Journal) would have the support and freedom to pursue its future plans and that any surpluses in the future will be used for the current purpose and mandate of the (Journal) rather than being diverted to other ministries of General Synod,” said Bishop Elliott in his report, adding: “This is no small concern.”

He would be “deeply saddened,” said Bishop Elliott, if, after the un-incorporation, the Journal staff “found themselves enmeshed in bureaucratic power struggles” which would prevent them from moving forward or threatened its editorial independence.” The principle of editorial independence has been “foundational in the ethos and function of the Journal,” he noted.

Bishop Elliott also stressed that since the Journal is a charitable organization that has received millions of dollars from Canadian taxpayers, “it is important that there be complete transparency and due process in determining the disposition of the assets of the (Journal) corporation on wind up.”

In addition, he raised the issue of how the dissolution of the Journal corporation would affect staff and their status as employees.

Before CoGS voted on the motion, some members raised questions about the newspaper’s editorial independence and whether the move meant that the newspaper would now become a “house organ.”

Archbishop Colin Johnson, bishop of the diocese of Toronto and metropolitan (senior bishop) of the ecclesiastical province of Ontario, said he was “somewhat ambivalent” about supporting the motion. “It looks very much like integration of communication policies…Editorial independence is important, even if annoying; it provides vibrancy on the part of the church,” he said. “What safeguards are in place to maintain editorial independence?”

The Rev. Canon Gene Packwood, of the ecclesiastical province of Rupert’s Land, voiced an opposing concern, saying, “I’m being asked, as CoGS, to oversee (the Journal’s) policies, I’m going to be responsible for something I can’t direct…If it came to a point of disagreement (over what the newspaper publishes), what can we do about that?”

Bishop Elliott said that if the newspaper lost its independent editorial voice, it could lose its annual Heritage Canada grant, which provides substantial funding towards the cost of mailing the Journal and the 23 diocesan newspapers that it carries across Canada. “Heritage Canada doesn’t fund house organs. Anglican Journal cannot simply be a house organ,” he said.

Editorial independence is a requirement of Heritage Canada funding, which in turn is key to the continuation of the Journal and the diocesan newspaper network, said Kristin Jenkins, Journal editor. Without the federal subsidy to offset the high cost of mailing out the newspapers, most of them, including the Journal, would simply cease to exist, she told CoGS.

The approved motion to dissolve the Journal corporation asks CoGS to oversee the policies and operations of the Journal and delegate this responsibility to the Communications and Information Resources Committee (CIRC), where two current Journal board members also sit as members.

Bishop Elliott said Heritage Canada has provided written assurance that the newspaper’s new form of governance will not be an issue in qualifying for the Aid to Publishers component of its Canada Periodical Fund.