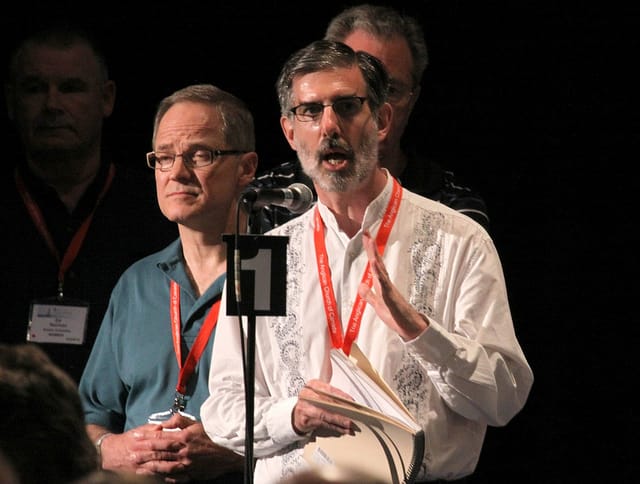 “I’m very disappointed that some Covenant supporters have tried to turn this into a contest about who loves the Communion more,” says Archdeacon Alan Perry. Photo: Art Babych

An international coalition of Anglicans says it is “cautiously optimistic” that a majority of diocesan synods in the Church of England will ultimately vote to reject the proposed Anglican Communion Covenant.

Although the proposed Covenant is intended to help overcome divisions in the global Anglican Communion, critics say the document could make matters worse. Most concern appears to be centered on the fourth section that refers to “relational consequences” for provinces that breach moratoria on the blessing of same-sex unions, the ordination of persons living in same-sex unions and cross-provincial interventions.

So far, 10 dioceses in the Church of England have approved the Covenant and 17 have rejected it. A total of 22 dioceses will need to reject the document before it can disappear entirely from the synod agenda.

“If somebody’s going to be making a decision about whether you have done something wrong, you at least want the decision to be demonstrably fair,” said the Ven. Alan Perry, who has studied and blogged extensively about the proposed Covenant, in an interview. “We are not of one mind on whether any Covenant or only this Covenant is off,” he added, “but we certainly agree that this Covenant is dangerous and is likely to create far more division and trouble for the Communion rather than actually address the divisions.”

He added that it is too early to tell how the proposed Covenant is being received in Canadian dioceses, which have only been asked to study and consider the document so far. “We won’t get a very clear picture until much closer to General Synod next year,” he said.

The more familiar people get with the Covenant, the more likely they are to see it as a “deeply flawed approach to the challenges of the Anglican Communion in the 21st century,” said the coalition’s moderator, the Rev. Dr. Lesley Crawley in a statement released yesterday. The Rev. Malcolm French, Canadian convenor for the coalition, notes that the study material provided by the Anglican Church of Canada “offers a fairly balanced basis for dioceses or parishes to study it.”

Elsewhere in the Communion, the Anglican Province of the Southern Cone, which includes Argentina, Bolivia, Chile, Paraguay, Peru and Uruguay, approved the proposed Covenant as has the Anglican Church in Papua New Guinea, Mexico, the West Indies and Myanmar. The Church of Ireland decided to “subscribe” to the Covenant in May, noting that its sovereignty and doctrine remain unaltered. The Covenant is almost certain to be rejected by the Anglican Church in Aotearoa, New Zealand and Polynesia at its General Synod in July. This is because the Maori rejected it last April, and their approval is required. The U.S. Episcopal Church is also slated to consider it at its General Convention in July.

“I’m very disappointed that some Covenant supporters have tried to turn this into a contest about who loves the Communion more,” Archdeacon Perry said in a statement. “Our position has always been that ‘No’ to the Covenant really is ‘Yes’ to the Communion. We are a family, and we shall continue to be a family regardless of what happens.”