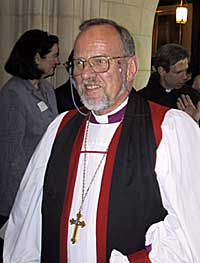 Religious leaders from a wide range of denominations, including the Canadian Anglican primate, Archbishop Andrew Hutchison, met in Washington D.C. from Sept 11 to 13 and urged governments to work with churches to eliminate extreme poverty around the world.

“There is a broadening consensus that it is now possible to eliminate extreme poverty from the planet. All that is missing is the political will,” said Archbishop Hutchison in an interview shortly after the event.

The gathering supported the United Nations’ Millennium Development Goals, which seeks to cut extreme poverty in half by 2015 and get developed nations to commit to spending 0.7 percent of GDP on international aid.

The group met at Washington National Cathedral in an event that inaugurated the cathedral college’s Center for Global Justice and Reconciliation, which is directed by Canon John L. Peterson, former secretary general of the Anglican Communion.

A communique developed by a consultation among the leaders on Sept. 12 said that, “We believe that our communities of faith, representing millions of people and sponsoring numerous human development initiatives, can provide new models for advancing a global movement against poverty. The churches have a vast network of institutions, trusted relationships with millions of people and access to countless local communities, all rich resources for development.”

It added: “In making these calls to governments, we know that the churches themselves must be active partners in the work of development and building a just world economy … At the same time, we humbly recognize our weaknesses. As Christian leaders, we challenge our own churches to pursue partnerships with governments, international organizations, civil society and across confessional lines.”

The leaders, who also included Bishop Frank Griswold, presiding bishop in the Episcopal Church of the USA; former Archbishop of Canterbury George Carey; Secretary General Kenneth Kearon of the Anglican Communion; Lutheran bishop Tord Harlin of Sweden; Methodist general secretary George Freeman and Stephen Colecchi, director of the office of international justice and. peace of the US Catholic Conference of Bishops. The event was set in motion by Anglican archbishop Njongonkulu Ndungane of Cape Town. Representatives of Islam and Judaism also attended as observers.

In a keynote address, Jeffrey Sachs, director of the Earth Institute at Columbia University and special advisor to UN Secretary-General Kofi Annan, said that “these goals are achievable, because in every area, whether it’s feeding people in Africa, fighting malaria, helping people with AIDS to stay alive, there are practical, proven, low cost interventions that can accomplish the tasks.”

Bishop Griswold and Mr. Sachs criticized the U.S. government’s approach to development aid as it is urging the international community to back away from the U.N.’s goals.

Archbishop Hutchison also said in the interview that Canada is not spending 0.7 percent of its GDP on development aid. “Canada could do more,” he said, noting that Prime Minister Paul Martin refuses to commit to an absolute spending percentage, but has said Canada will increase its aid.

“It is also important to know that every Canadian (Anglican) diocese gives 0.7 percent (of annual revenue) and some more than double that figure to our Primate’s World Relief and Development Fund. In other words, we are not asking governments to do something that we are not able to do ourselves,” he said.

After developing the communique, the group of about 30 participants traveled to New York City on Sept. 13. Five representatives of the group, including Archbishop Hutchison, met with U.N. deputy secretary general Louise Frechette, a Canadian from Montreal, and Jean Ping, president of the General Assembly, to deliver the communique.

Ms. Frechette was particularly interested, said Archbishop Hutchison, in Archbishop Ndungane’s news that a coalition of African churches of various denominations is developing a monitoring process “to be sure that development money is effectively spent on the ground” and not lost to corruption.

The gathering also attended a multi-faith service at the cathedral on Sept. 11, featuring readings from the Old Testament, New Testament and the Koran. “I was enormously impressed with it. It was a wonderful gathering of consensus around a deeply shared concern that poverty around the world is a scandal,” said Archbishop Hutchison.

Sask. bishop looks to step down in spring

Canadian Anglicans ask: Will Charles be the reconciliation king?