Home » Christmas with a twist

Christmas with a twist 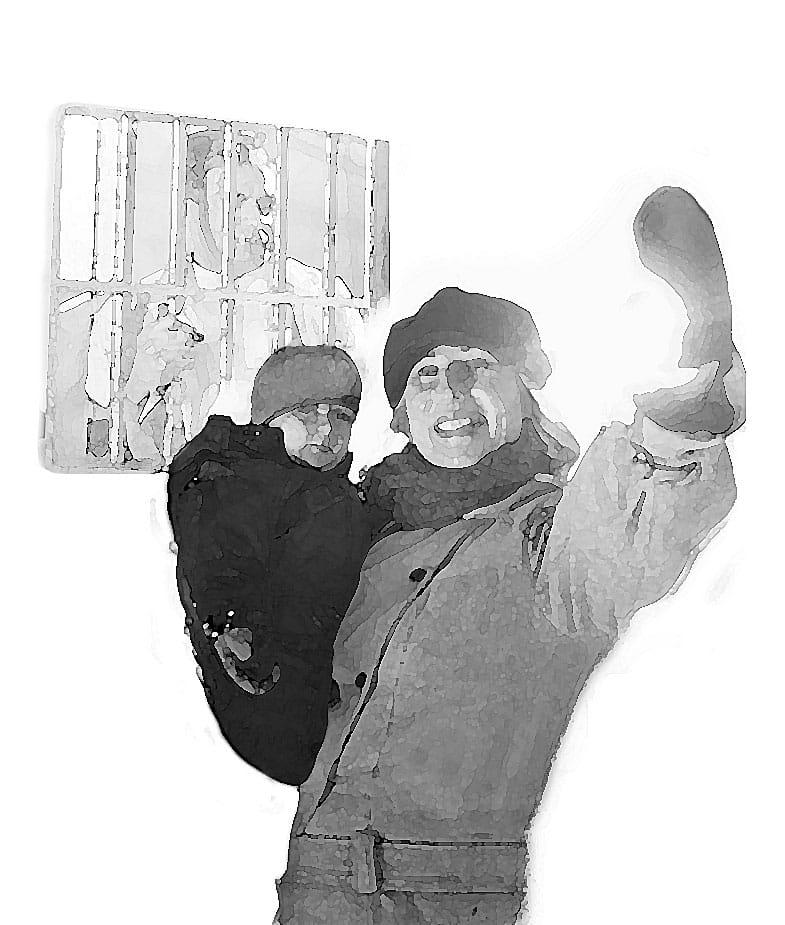 STANDING IN THE SNOW was a young woman holding a baby. Illustration: SRF

She was worried and didn’t tell her boyfriend. She went to the drugstore to get what she needed and now the five- minute wait in her bathroom seemed like nine months. Her heart stopped as she watched. At first misty, easy to imagine it wasn’t really there, but soon all too clear. Like a great black arrow pointed straight at her heart. A second line appeared on the thin paper strip.

Thoughts raced through her mind. She could abort it. She could kill herself. She could ignore it and maybe it would go away. She stood in the bathroom in silence.

And in the silence she could hear a spring robin calling. So unconcerned, so full of life. Its chirps sounded like, “It’s OK. It’s OK.”

Suddenly she knew what to do. She sat down and wrote to Jack.

The guys were crowding around the stainless steel desk. “Hey, Mr. Middleton, who’s got one this time?”

“Hey, Jack, there’s one for you!” someone yelled.

“Sure there is,” Jack yelled back from his bed.

“Quit mucking with my head,” Jack threw back the threat.

“I ain’t mucking with your head. There’s one for you.”

Sure enough, there was a letter for him, the envelope slit neatly open, the contents already photocopied.

Back in his cell, he sniffed the envelope to see if she had scented it. Bet they couldn’t photocopy that. He spread out the paper. She loved him, she wanted him back, she wished he was with her, she cried thinking about him. She hoped he wouldn’t hate her. She was pregnant.

He’d never got very far with arithmetic in school, but you didn’t have to be a genius to figure this one out. He’d served six months of his 10-year sentence, and she was just now pregnant.

It was hard to sleep that night. Anger and depression surged back and forth in waves. He decided to cut her off. When he did drift off to sleep, his cell-mate had a nightmare and kept waking him up, yelling, “It’s OK! It’s OK!”

In the morning Jack couldn’t be sure if he had dreamed that voice or not, but he began to think. By mid-December he was ready to break his silence. He bought a stamp and some paper with money left over from his two-dollars-a-day pay for cleaning toilets on the unit, got permission to use a pen and wrote back. He wrote that he loved her and asked her for a favour.

Last year her deputy had worked the Christmas shift, so this year it was her turn. Mrs. Stanley walked through the units, knowing this was a tough time of year for the guys. “Hey, Mrs. Stanley, happy Christmas!” “Same to you, Mr. Browning!” Her cheerful manner lifted spirits and of course it never hurt to be cheerful around the warden.

When the electric bolt slid back and she stepped into Jack’s unit, she greeted the crowd of guys. Everyone greeted her back.

Jack was standing in front of the barred window. Ignoring the warden. Transfixed by something outside.

Mrs. Stanley came up behind him and looked out the window. There, standing in the snow in the parking lot in the distance was a young woman holding up a baby for Jack to see. Being close to the window and behind Jack, Mrs. Stanley could also see the reflection of Jack’s tears silently running down his face. She was taller than he was, and she manoeuvred her body so that his face was hidden from the rest of the unit. “It’s OK,” she said quietly, so he could wipe the tears before anyone saw them. They continued gazing on the babe in silence.

“It’s OK!” the Babe still says to us, and we proclaim that Good News to all humankind-to everyone without exception. Ω

The Rev. Canon Harold Munn is the rector of The Church of St. John the Divine in Victoria, B.C.