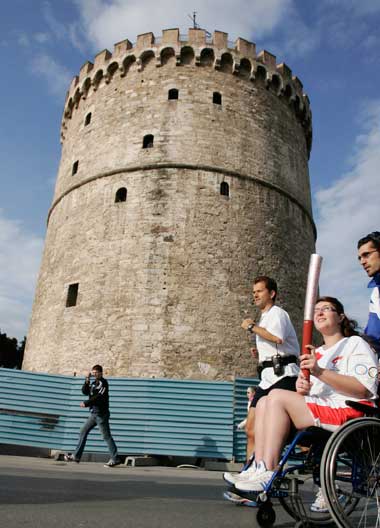 A Greek paralympic athlete carries the Beijing 2008 Olympic torch in Thessaloniki. Christian leaders are concerned that foreign Protestant chaplains are banned from volunteering at the games in China.

Hong Kong
A Hong Kong Christian leader who works in a sports ministry says Chinese authorities should allow foreign Protestant clergy and faithful to serve as volunteer chaplains at the Olympic Village, to ensure the quality of the August games in Beijing.

“We have applied to send [Protestant] foreigners to serve as chaplains at the Olympic Village, but until now there has been no positive response,” Johnny Yiu Yuk Hing said. “At the last Olympic Games [in Athens], there were about 30 Protestant chaplains from different countries to serve, but we understand there are no foreign volunteers being admitted at the Beijing Olympics in August,” the general secretary of the Hong Kong Sports Ministry Coalition said. “Until now there have been only three local Chinese admitted as chaplains.”

Mr. Yiu doubted that Chinese Protestant chaplains understand the different Christian denominations, and the cultures of different national groups. “It affects the intrinsic quality of the Olympic Games,” he said.

The officially-sanctioned Chinese Protestant church estimates there are at least 18 million Protestants in China, but many other Christians belong to “house” or underground churches, say some analysts. The China Christian Council, which groups Protestants, emerged after China’s Cultural Revolution from 1966 to 1976 when the expression of religious life was effectively banned.

Rev. Dionisy Pozdnyaev, a Russian Orthodox priest who serves in Hong Kong, said his church has been negotiating with the Beijing Olympic Organization Committee to be allowed to send clergy to the games and he believes there could be some positive results.