Home » Call to action for Horn of Africa drought victims

Call to action for Horn of Africa drought victims 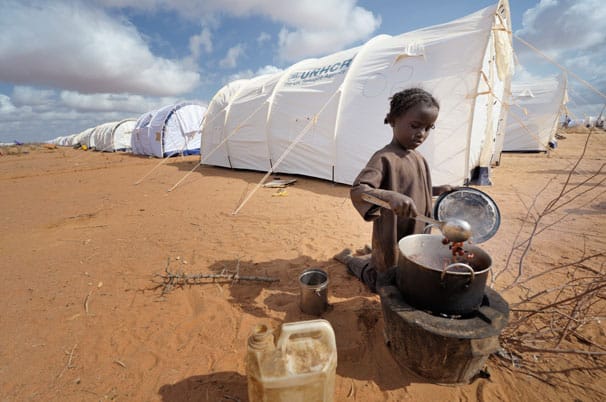 Ecumenical faith leaders in Africa on Aug. 10 launched a call to action and appeal for the more than 12 million people affected by the worst famine to hit the Horn of Africa in 60 years.

In Canada, the Primate’s World Relief and Development Fund (PWRDF) continues to accept donations for famine victims. PWRDF, the relief and development arm of the Anglican Church of Canada, has released an initial grant of $75,000 for the victims through the Action by Churches Together (ACT) Alliance and the Canadian Foodgrains Bank.

“Ethiopia, Kenya and Somalia are being overwhelmed by people fleeing hunger, thirst and war. More money is needed urgently to meet people’s needs,” said faith leaders in a statement issued after a meeting organized by the Anglican Alliance for development, relief and advocacy.

About US$1.4 billion is needed to bridge the humanitarian funding gap, they said.

The leaders also called on the United Nations to “give higher priority to policies to provide sustainable food supplies, and to work with the Arab League to address the root causes of the conflict, which has affected the region for so long.”

Among those represented at the Nairobi meeting were the Council of Anglican Provinces, the All Africa Council of Churches, the Lutheran World Federation, ACT Alliance, and World Vision.

In Somalia, about 3.7 million or half of the nation’s population are suffering from the drought. The ACT Alliance has been distributing 262 tons of flour and 52 tons of cooking oil to the hardest hit areas of Gedo province, said the PWRDF on its website. It has also been involved in relief efforts in the refugee camp at Dadaab, Kenya. “The camp-built to house 90,000 people-is currently home to more than 40,000 with more than 1,000 new refugees arriving each day,” said the PWRDF.

In Kenya, the PWRDF is working through the Anglican Church of Kenya and the Canadian Foodgrains Bank. Food purchased from local farmers is being distributed to those in need, including refugees at Dadaab camp.

More than 68,000 people in Ethiopia are being provided with food, healthcare and drought preparation training.

Information on how to donate through PWRDF can be found here.

Those wishing to donate to the call to action and appeal issued by African faith leaders can wire money through: