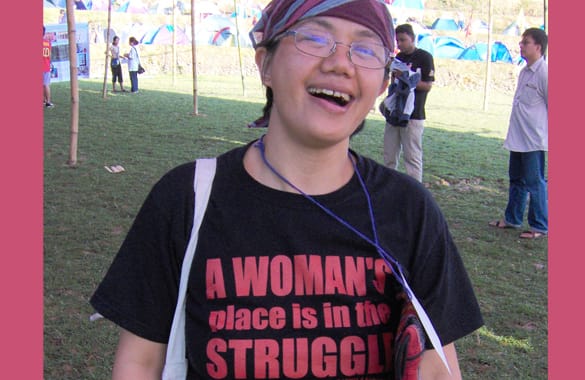 Vernie Yocogan-Diano, a human rights activist from the Philippines, is one of the international partners attending the Women and People’s Summit of the Americas Against Militarization in Colombia. Photo: Contributed

Activists from Canada, the Philippines and Democratic Republic of Congo are travelling to Colombia to take part in the Women and People’s Summit of the Americas Against Militarization. Kairos, a Canadian ecumenical social justice organization, has organized the delegation’s trip as part of its Women of Courage tour. The six women will be among 100 international delegates and 500 more Colombian delegates expected to gather at the summit.

“The work of the women’s movement in Colombia is an incredible example, and I think we as Canadians can learn from it and so can international partners,” said Rachel Warden, co-ordinator of Kairos’s Latin American partnerships program. “It’s very creative and courageous work and they really bring a feminist perspective to peace building.”

Yolanda Becerra Vega is one of the international delegates, but she will meet the group in Colombia. She is Colombian and one of the organizers of the summit. She is a well-known human rights defender and leader in the women’s movement. She is also national director of the Popular Women’s Organization (OFP), a Kairos partner. In 2005, she was one of 1,000 women to receive the Nobel Peace Prize as part of the One Thousand and One campaign.

Warden said the delegates will initially gather in Bogata, and then will travel in smaller groups in missions to areas where the OFP is working in regions of conflict in Colombia. “It’s an opportunity to visit women in those contexts…,” she said. “The indigenous women from Canada will be travelling to a region where there is a strong indigenous presence and meeting with indigenous women in the south of Colombia.” The partner from the Congo will also travel to an area of Colombia where there is a strong presence of Afro-Colombians.

The summit itself with two days of round table discussions will take place in Barrancabermeja, where the OFP was founded.

On Aug. 23, there will an ecumenical vigil near a U.S.-Colombian military base. “Part of the aim of the conference is to draw attention to the impacts of militarization on women,” says Warden.

According to the OFP, “the militarization of the territories has lead to the loss of the people’s sovereignty, autonomy and self-determination….” Military bases are often located in indigenous, afro-descent and peasant territories, the OFP notes. “Furthermore, these bases promote prostitution with houses that are officially designated as “entertainment” for the soldiers. However, they represent women as sexual slaves and promote other forms of violence, including femicide.”

Warden says there are at lease nine new military bases proposed in Colombia, and the summit is, in part, a response to that. “Other countries in Latin America are talking about demilitarization and ways forward that don’t include the military, but Colombia is being increasingly militarized.”

One of the Kairos partners that the group will visit while in Colombia is Lilia Solano the director of the Bogata-based human rights organization Justicia y Vida. Kairos recently issued an urgent action request to its members on Solano’s behalf after she received death threats and the organization’s offices were fired upon on July 21. The organization was instrumental in presenting a complaint to Colombia’s Constitutional Court against the installation of U.S. military bases in Colombia, and Solano believes the threats may be a backlash.

“International events like this are very important in raising the profile of human rights defenders … and also making visible the human rights situation,” says Warden. “But the other important thing is ongoing vigilance and monitoring and creating these urgent action networks …making it broader and international, because that’s what saves lives.”

Warden said Kairos will hold its own round table discussions following the summit. The objective is to increase solidarity between partners and to collectively analyze issues around women and human rights and militarization. This work will help Kairos identify advocacy strategies for its planned Women of Courage campaign, which will include publishing research and case studies as educational resources, she said.

The delegates will also meet with the Canadian ambassador before they return to Canada and their home countries.

The other international partners are Vernie Yocogan-Diano, Chantal Mayanga Bilulu. Yocogan-Diano is a human rights and community activist in the Cordillera, Philippines, where she has worked extensively for indigenous rights. She is now the executive director of the Cordillera Women’s Education Action Research Center. Mayanga Bilulu works with Heritiers de la Justice in the Democratic Republic of Congo to defend and promote human rights. She is the program co-ordinator for women and children. She has organized training as paralegals for sexually violated women and helped them develop a network to defend their rights.

The Canadian delegates include Yolanda Bird, Jill Harris and Marie Dominik-Langlois. Bird is a member of the Cree nation in Saskatchewan and a voice for indigenous leadership in the Anglican Church of Canada. Harris is an elder with the Penelakut First Nation in British Columbia and is also Anglican. She is also on the governing board of the Women’s Interchurch Council of Canada. Dominik-Langlois has been involved in a range of social justice work such as advocating for Haitian workers’ rights in the Dominican Republic and human rights in Latin America. She recently began working for the Canadian Network for Corporate Accountability.