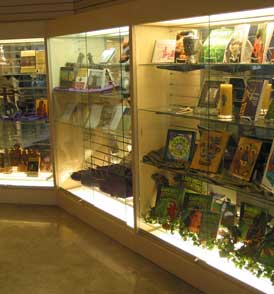 Anglican Book Centre was taken over by Lutheran retailer Augsburg Fortress in 2007.

In 2007, the Anglican Book Centre (ABC), the Canadian church’s Toronto retailer, survived and looks like a viable operation for the future, according to its new manager, the Lutheran publisher and retailer Augsburg Fortress.

Slated to close its storefront outlet in favor of a Web and telephone-only operation, the bookstore experienced sharply reduced sales last year but made a small profit, said manager Andy Seal.

Final numbers were not yet available and comparisons with previous years are somewhat difficult since Augsburg took over management of the operation in June, 2007 from the Anglican church’s national office, called General Synod.

Peter Blachford, treasurer of General Synod, said he expected that bookstore sales for all of 2007 were about half the $2.96 million recorded in 2006.

Mr. Seal, in an interview, estimated that the operation showed a profit of $25,000 last year, showing that “the store did perform such that it is a sustainable location.” In 2006, said Mr. Blachford, the store lost $504,000 and in the three years before that, total losses were $899,000. In the five years prior to 2003, the store returned a total of $1.38 million in profits to General Synod, but began to feel the pressure of competition from the Internet and mega-booksellers such as Amazon.com and Chapters/Indigo. In addition, the store experienced a difficult move to a new building in 2004 and the departure of two managers.

Mr. Blachford also noted that certain 2007 costs, such as inventory writedowns and placement counseling for employees who were laid off or who left, were borne by General Synod.

Factors affecting 2007 sales included a five-week shutdown due to the transition to Augsburg, inventory counting and computer training. There was also uncertainty about whether the store would close. The closure was announced in November, 2006 and was to take effect in July, 2007. The arrangement with Augsburg was negotiated in early 2007.

“There was a fair bit of confusion. People thought we were closing. We need to increase the level of service and regain people’s trust,” said Mr. Seal.

Mr. Blachford also noted that the store did little marketing as its format was being debated and negotiated. ABC is internationally known; it sells vestments, cards, gift items and ceremonial goods such as chalices. It is also a supplier to parishes of offering envelopes, Anglican service and hymn books, baptismal certificates and other items.

Another factor contributing to the sales decline was that the bookstore cut items that it couldn’t sell at a profit, said Mr. Seal.

He said that, under Augsburg, the bookstore transferred to a new computer system, causing “some growing pains.” Augsburg found that the store’s existing computer software did not provide some sales analysis data, among other things, so it moved the operation to Augsburg’s system.

Augsburg is reviewing ABC’s inventory. “The book industry is changing. There are so many options for people. We want to make sure we have the core items people want. If we sell less than four of an item in a year, we need to special-order it (rather than keep it in inventory), or we’re not good stewards of our resources,” said Mr. Seal.

As the store’s mail-order and warehouse operations were moved from Toronto to Kitchener, Ont., where Augsburg is based, some Anglican customers complained of delays in order fulfillment, according to church sources.

Although Augsburg initially said it wanted to retain the existing staff, only one member of the former ABC staff remained, as of March, 2008. Two were laid off when the warehouse operation was consolidated in Kitchener and others left, some for different positions within the church. A new sales position was created in order to meet with clergy and bishops, “asking what it is we can do better to work in partnership with them,” said Mr. Seal.

With its range of products and choice of books from scholarly to popular, ABC is unlike most Christian bookstores or clergy suppliers, said Mr. Seal. “There are only half a dozen stores anything like this. Closure would have left a huge hole in Toronto.”