Home » B.C. picks up the pieces after fires

B.C. picks up the pieces after fires 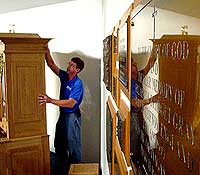 Mover Paul Griffith attaches the pipes to the organ at St. Andrew’s church in Kelowna, B.C., 11 days after it was removed due to the threat of forest fires in the area. A massive blaze reached the city’s outskirts, destroying more than 250 homes and forcing more than 30,000 residents from their homes.

Churches in the Okanagan region of British Columbia are trying to regroup and determine how to help community residents who were displaced from their homes by forest fires that threatened areas in the diocese of Kootenay and the Anglican Parishes of the Central Interior (formerly the diocese of Cariboo) and left scores of people homeless. Tens of thousands of residents were evacuated as the fires spread between August and early September. By mid-September, the fires were abating.

At least one clergy member in the diocese of Kootenay, Rev. Douglas Stanley, a retired priest, lost his home, as did several parishioners of St. Andrew’s church, in Kelowna’s Mission district. St. Andrew’s incumbent, Rev. Michael Karabelas said his parish gratefully accepted an invitation to worship at nearby St. Mary’s church (which was also briefly under evacuation), which still had its furnishings in place during the periods of uncertainty between the various periods of evacuation. Less than a week after that, Mr. Karabelas invited the general community to gather at St. Andrew’s.

“It was not a liturgy,” said the priest. “We sang a couple of old-time tunes and I reflected on nature and the theology of nature, as best I could.” After the Aug. 29 service, about 80 people, many of them non-Anglicans, mingled in the church’s foyer (as the basement was not useable) for juice and snacks.

“People didn’t want to leave afterwards. They stayed and told their stories,” said Mr. Karabelas. “It’s rather like Christmas Eve here now. People are talking to strangers. I only hope it lasts.”

As he spoke, Mr. Karabelas apologized for the background noise; a sign was being installed announcing registration for his church’s Sunday school. Life, he said, goes on in the parish.

In late August, when the fires reached Kelowna, Mr. Karabelas was attending the consecration of a bishop in the diocese of Northern Mexico, Kootenay’s companion diocese. At one point, he and his wife, Heather, heard that the church and their home had almost certainly burned in the fire.

“We got another call the next day that both were spared,” said Mr. Karabelas. “Heather and I both fell on the floor in tears.”

When St. Andrew’s was put on evacuation notice, parishioners were able to remove valuables from the church building: vestments, chalices, even a baby grand piano and baroque organ. All the items went into storage.

Archdeacon Barb Liotscos, executive assistant to Archbishop David Crawley, said as many as eight Anglican families in the diocese of Kootenay lost their homes. She expressed the diocese’s thanks for the response from the rest of the country. The Primate’s World Relief and Development Fund, the church’s development arm, sent a $3,000 grant.

Archbishop Crawley told a recent church assembly that he has a total of $20,000, including $10,000 from the diocese of New Westminster and $5,000 from the diocese of Montreal. He appealed to clergy to identify people in immediate need. The region?s economy is in a tailspin because of a drop in tourism and industries, like a local sawmill that shut down because of the fires.

While news of the larger Kelowna fire eclipsed that of Barriere, the fires continued to burn into September in the small community north of Kamloops. Some 70 homes – or about 20 per cent of the houses – burned in a fire in early August.

Ken Platz, warden at Barriere’s Church of the Redeemer said none of the 20 or so people who attend the church regularly lost their homes. Many parishioners volunteered in the community with the disaster relief, sorting clothes, answering phones or simply by being available in the church for counseling.

Mr. Platz said things are not back to normal yet, with the fire continuing to burn around the community. In the coming months, he said, Barriere residents will have to cope with not only the loss of homes but also the disappearance of the nearby Lewis Creek sawmill, a major employer.