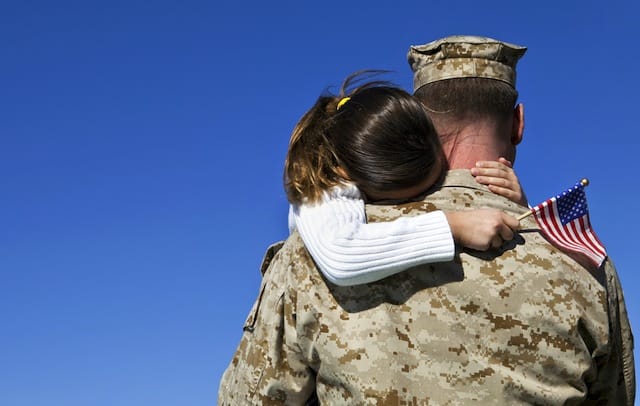 Newton, Massachusetts– Some wounds of war are all too visible-a missing leg, a shattered arm. The invisible wounds of mind and soul are often more difficult to spot, and equally hard to treat. But those who know where to look can help them heal, and it’s a message that is hitting home for U.S. congregations as more than 1.35 million veterans adjust to civilian life after deployments in Iraq and Afghanistan, Religion News Service reports.

With symptoms of post-traumatic stress disorder (PTSD) affecting an estimated one-in-six returning service members, congregations are coming face-to-face with the tolls of war. Experts say faith groups have much to offer, even when the wounds include PTSD and traumatic brain injury.

"Churches are kind of in the dark about how to help, unfortunately," said Peter Bauer, an ordained minister and clinical social worker with the Veterans Administration in San Antonio, Texas. "But they don’t have to stay there. There are some very easy things that churches can do to be proactive and help with this population."

Bauer, a former Navy chaplain, recently convened workshops on PTSD and traumatic brain injury for pastors and seminarians at Andover Newton Theological School in Newton, Massachusetts. His educational outreach builds on other small-scale initiatives that have gained momentum in recent years.

Since forming in 2009, the non-profit group Care for the Troops has equipped 37 Georgia congregations to convene peer groups, identify local clinicians with military experience and otherwise support soldiers’ families. The project is now adding congregations in Tennessee, California and other states.

Illinois-based Wheat Ridge Ministries has been circulating Lutheran liturgies and other resources to help churches build bonds with military families. Point Man Ministries in New York has partnered with about 250 U.S. congregations to host veteran-led, peer support groups for those dealing with PTSD.

"Sometimes we hear people say, ‘We don’t have the training to deal with PTSD,’" Pickens said. "But (to minister effectively), I don’t need to know what it means to have PTSD. I just need to know how to listen. It’s a matter of providing open space where people can talk."

In his presentation, Bauer shared sobering facts about struggles faced by those returning from war. Example: in 2010, the military had more suicides (468) than deaths in combat (462). The roots of trauma often go back to childhood, Bauer said, where 60 percent of veterans experienced physical abuse and 40 percent experienced sexual abuse. Such psychological wounds can get re-opened in combat, and by the time a soldier comes home, mental and emotional patterns can be habitual and difficult to overcome.

Hidden wounds can be tricky to manage, Bauer said, in part because they’re not easy to diagnose. Depression is common in the 3.2 million Americans who’ve suffered traumatic brain injury, he said. He urged members of faith communities to take note when someone seems overwhelmed by normal levels of light or sound, and make referrals for medical evaluations.

Congregations, however, can do much more than refer. Bauer suggested helping veterans find contemplative or more traditional worship services as an alternative to contemporary services where loud bands and bright lights can trigger anxious reactions.

Churches can show ongoing care in simple ways, Bauer said, such as hosting a monthly support dinner for military family members. They should also appoint a volunteer sponsor to check in monthly with a deployed serviceman or woman, and a second sponsor for his or her loved ones at home, during deployments.

"It’s unforgiveable in 2011 that someone (who belongs to a church) would be deployed to Afghanistan, and no one from that church would be willing to step up to the plate, be a sponsor and make sure they’re OK," Bauer said. "That is a crime."

Veterans say churches are finding their way in a new ministry landscape, though not always with success. James Knudsen, a Vietnam War veteran and PTSD sufferer in Marion, Iowa, says churches in his area have resisted requests for them to host support groups for veterans. "I have not heard of any churches in my area that are helping veterans," Knudsen said. "They have other interests."

But in western Massachusetts, 29-year-old Robert Henry Hyde, an Air Force veteran who served from 2000 to 2004 and was deployed to Iraq, helped raise awareness in local churches before he left the area to attend seminary.

"Ministers, though they might not have served in the military and might not understand it, have the tools to help people handle PTSD or brain trauma, or at least refer people to the right professionals to get help," Hyde said. "So in that sense, churches need to be a part of this" healing effort.

Even churches with a history of ministry to veterans see new opportunities now to branch out. The Rev. Jeremi Colvin, assistant rector for mission in homeless ministry at the (Episcopal) Church of the Holy Spirit in Fall River, Massachusetts, hopes her church will soon begin hosting peer support groups for veterans. "There could be more outreach," Colvin said at Bauer’s workshop. "We have a ministry of outreach to veterans and military families, but we need to spread out, talk to people, talk to hospitals, and make it more known that we’re there."