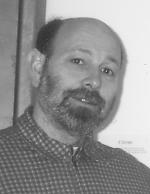 ‘Am I treading on someone’s toes? Absolutely and I want to. What better thing would Jesus have wanted than for people to be real with each other?’
— Thomas Ackermann, Artist

Those who may doubt the power of images to stir emotions and challenge intellect should consider an art exhibit that was recently held at St. John’s Church in the little community of Forest, Ont., and may be exhibited in other locations.

Entitled Sleeping With Jesus, the show featured 16 paintings by local artist Thomas Ackermann and was to run from March 12 through April 30. The oil-on-canvas works, which were hung on the four walls of the sanctuary and in the adjacent hall, caused dismay among most of the parishioners and prompted angry calls to the Diocese of Huron’s synod office in London, Ont.

“One of the priests who had attended a monthly meeting of clergy in (the local) county called me and said, ‘The clergy in my area are really upset about this art show. They called it shocking, provocative, sensual,'” said Rev. Nick Wells, rector of St. John’s, which is located about 40 kilometres northeast of Sarnia, Ont.

“A lot of people (in the congregation) are uncomfortable with these pictures,” commented Faye Jackson, a St. John’s parishioner.

Archbishop Percy O’Driscoll was away during much of the exhibit and hadn’t seen it, but noted “clergy have a fair bit of leeway.”

Nearly all the paintings feature a cross and in some of them the figure of Jesus is naked. Many are fairly large – about 1.5 metres by 1.8 metres – and they are not conventionally pretty pictures. Mr. Ackermann’s colors are bold, his images swirl with movement and his figures possess a dramatically primitive quality.

The depiction of a nude Jesus is not common, but it is not new, according to art experts. “During the Renaissance, the image of Christ nude was usually used in the context of Christ as a child. The idea was that the shame of humanity was erased,” said Janine Langan, professor of Christianity and culture at the University of Toronto. “It (the nudity) can be taken as shameful or magnificent,” she said.

“There is a theology behind it,” noted Rev. Peter Larisey, professor of religion and art at Regis College, University of Toronto. “Christ was fully human. He was a sexual being. The idea is linked to the notion of salvation. It is the whole human you save, not just (the one) covered with clothes,” he said.

Nevertheless, the unconventional images are not popular with the members of the congregation, all of whom are members of the Kettle Stony Point First Nation reserve, located near Ipperwash Beach. It was where Native protester Anthony “Dudley” George was killed in 1995 in a confrontation with Ontario Provincial Police.

“I didn’t see the nakedness at first, but I had a little problem with it. People are uncomfortable with the penises in those pictures, like the one right up front where our cross was taken down,” Ms. Jackson said. She was referring to the space behind the altar, which normally holds a large cross. During the exhibit, Mr. Ackermann’s painting, Mount of Olives, hung there. Using sombre greys, it features a naked male figure raising a bundle of what might be cloth or a sacrifice to God and it refers to Christ’s grief-stricken prayer, just before his crucifixion, in the Garden of Gethsemane.

Mr. Wells, who met Mr. Ackermann several years ago, feels several of the paintings make a powerful statement about the often-tortured relationship between whites and Natives. “They (Natives) have bought the myth that Jesus is blond-haired, blue-eyed and dressed. Christianity has tromped on their culture. White people are getting 1,000 times more out of the exhibit than the native people are. I feel sad that my culture has done that.”

Asked whether she sees that type of symbolism in the pictures, Ms. Jackson responded, “I don’t see it.”

Mr. Ackermann’s religious feelings run deep. He remembers carrying the cross at about seven or eight, during the stations of the cross, in the Roman Catholic church in Germany, where he was born. The figure of the crucified Christ prompted a feeling of “total love and compassion for the person who was hurt,” he said. One of his paintings, Kissing Jesus, reflects the child’s feeling that “I wanted to give him a kiss.”

Educated in Toronto, he has been exhibiting his work for about 25 years and has returned to religious themes a number of times. Three years ago, he exhibited a series of works based on the Jewish mystical scriptures called the Kabbala.

He said he is not interested in cheap sensationalism, but – like all artists – in expressing emotion, provoking debate and exploring the glories and tragedies of humanity. His emotions include anger at the church for its periods of oppressiveness.

“Am I treading on someone’s toes? Absolutely and I want to. What better thing would Jesus have wanted than for people to be real with each other?” he said.

Although Ms. Jackson said she hasn’t seen a significant decline in church attendance, Mr. Wells noticed at least one regular churchgoer was mostly absent during the show. However, he also noted that, in order to inaugurate the show, Native drummers performed in the sanctuary.

“Sometimes you have to push. I think a greater good is coming out of this. We never had drumming in the church before. New avenues are leading to healing, reconciliation, dialogue,” Mr. Wells said.

Ms. Jackson, who calls the painter and his wife “pretty nice people,” and says she and the congregation have great affection for Mr. Wells, summed her feelings on the paintings up by saying they are “not going to be there very much longer.”