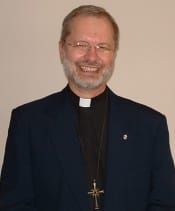 Archdeacon Derek Hoskin was elected the 8th bishop of the diocese of Calgary at a diocesan synod held June 24.

It took only two ballots to elect Archdeacon Hoskin, the incumbent of St. Leonard’s on the Hill, Red Deer and St. Paul Hillsdown, Alta., from a slate of eight candidates in the much-awaited election.

Archdeacon Hoskin had acted as Calgary’s diocesan administrator since the departure last year of the diocesan bishop.

In a written response to questions posed to all candidates by The Sower, the newspaper of the diocese of Calgary, Archdeacon Hoskin stated that he grew up in a rectory. “I believe that I can truly empathize with clergy and their families. In crisis, I learned how helpless I was and how I had to trust God completely,” he said.

On being a pastor, he wrote that “even though I usually wonder what I will say, I am most comfortable providing pastoral care to those who are suffering. I think that this is because I have been allowed to experience personal heartaches and failures during my life.”

The ballots showed that Bishop-elect Hoskin received a total of 163 votes – 57 from clergy and 106 from laity.

Ordained a priest in 1973, Bishop-elect Hoskin received a licentiate in theology from Wycliffe in 1972; he also pursued theological studies at Lincoln Theological College, England, from 1972-1973. He is married to Pauline, a public health nurse.

Archbishop John Clarke, diocesan bishop of Athabasca and metropolitan (senior bishop) of the ecclesiastical province of Rupert’s Land (where both Athabasca and Calgary are located), who acted as interim bishop of Calgary since October, announced that Bishop-elect Hoskin’s consecration would take place Sept. 29, in the Cathedral Church of the Redeemer.

The diocese of Calgary had been without a bishop since August 2005, following the resignation of Bishop Barry Hollowell, whose leadership had been in turmoil following his decision to order the closure of three inner city churches and to strip the downtown Church of the Redeemer of its cathedral designation. Bishop Hollowell had also indicated in his letter of resignation that he felt he had been personally blamed for decisions made regarding the diocese’s challenges, including native residential school litigation and limited parish resources, which led to the church closures.