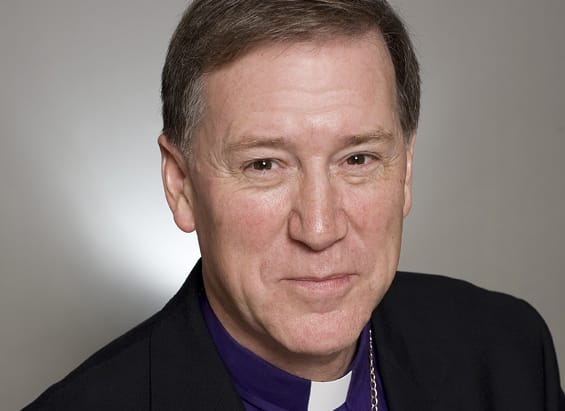 The church needs to “start looking out to the world in very courageous ways…the Gospel calls us to be the church in the world.” – Archbishop Fred Hiltz, Primate

It’s time for the Anglican Church of Canada to get innovative about the ways in which it engages the rest of the world, says Archbishop Fred Hiltz, primate.

Delegates to General Synod 2010 can expect to be “challenged to stop looking inward,” according to Archbishop Hiltz. “We’re focusing on mission,” he told the Anglican Journal.

Archbishop Hiltz explained that the church needs to “start looking out to the world in very courageous ways…the Gospel calls us to be the church in the world.”

About 500 delegates, international partners, visitors and staff will gather for the triennial meeting of the church’s governing body on June 3 to 11 at St. Mary’s University in Halifax.

The issue of homosexuality and same-sex blessings, a hot-bed of controversy that has dominated synods in the past, has been relegated to the back burner. Instead, delegates to General Synod 2010 will determine a new process for debating the issue. Period. Archbishop Hiltz said that he feels “optimistic that the capacity of our church to live with differences is growing.”

Vision 2019, the strategic plan for the church over the next nine years, will be presented to General Synod for consideration and adoption. Archbishop Hiltz acknowledged that it’s “not going to excite everybody,” and that some have commented that “it’s lacking in any reflection of our commitment to global relations, and to partnerships.”

Priorities for Vision 2019 are framed around the Anglican Communion’s Five Marks of Mission:

? to proclaim the good news of the kingdom;

? to respond to human need by loving service;

? to seek to transform unjust structures of society; and

? to strive to safeguard the integrity of creation and sustain and renew the life of the earth.”

Canon Kenneth Kearon, general secretary of the Anglican Communion, will address General Synod about the Anglican Covenant, which has been recommended as a way of healing divisions triggered by debates over the issue of sexuality. Archbishop Hiltz said that he thinks the mood of the Canadian church is “we’re ready to consider (it), we’re not ready to adopt it. I think most [delegates] are going to come and say, ‘Sure, let’s take a look at it and see what the merits are.’ And, in typical Canadian fashion, we’ll do it well. We’ll take it seriously…”

Delegates will be asked to consider resolutions reducing the number of delegates to General Synod, proposing to decrease the number of Council of General Synod (CoGs) members from 42 to 28, and proposing a new church law (canon) to describe and recognize the role of the National Indigenous Anglican Bishop, the Anglican Council of Indigenous Peoples and Sacred Circle.

Other overseas partners will offer reflections: Helen Wangusa, the Anglican Observer to the United Nations; Sooriyakumari Sinnathamby, director of the Sri Lanka office of the Organization for Eelam Refugees and Rehabilitation; and the bishop of Uruguay and Cuba, Miguel Tamayo, and his spouse, Martha.

Ecumenical partners who have been invited include Susan Johnson, the national bishop of the Evangelical Lutheran Church in Canada; U.S. Presiding Bishop Katharine Jefferts Schori; the Rev. Bruce Adema, president of the Canadian Council of Churches; Bishop Pierre Morisette, president of the Canadian Conference of Catholic Bishops; and Martha Gardner, Episcopal Church partner to the Council of General Synod.

It will not all be business, however. There will be a celebration of 300 years of continuous worship in the diocese of Nova Scotia and Prince Edward Island. It is also the bicentennial of Charles Inglis, the first bishop of Nova Scotia. The celebration will be held June 6 at Exhibition Park, the city’s trade show and exhibition centre.

“It’s really a significant milestone in Canadian church history,” said Archbishop Hiltz, adding that “…so much of our history as a church goes right back to those early days in Eastern Canada.”

Archbishop Hiltz was the diocesan bishop of Nova Scotia and Prince Edward Island before his election as primate in 2007. “It feels comfortable,” said Archbishop Hiltz, who hails from Dartmouth, N.S. and who spent most of his ministry in the diocese. “It is helpful knowing your way around the block.”