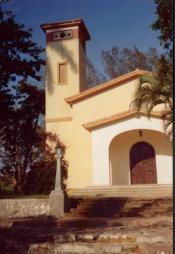 The seminary chapel, where students hold ecumenical services every Wednesday, is pictured near sunset.

ALTHOUGHthe steep, broken road leads through the ugliest and poorest part of this Cuban city, at the end of the trip the sun shines brightly on white stucco buildings and palm trees of the Seminario Evangelico de Teologica in Matanzas.

Passing the street’s grinding poverty, the open seminary gates reveal green lawns, rose gardens, white buildings and vegetable gardens hugging the hillside. A bright, gold chapel gleams in the sun at the back.

The seminary, funded and founded by the Presbyterian, Methodist and Anglican churches, with grants from parishes in the United States, is about 100 kilometres from Havana and about five minutes away from the parallel but weirdly different universe of the tourist playground of Varadero.

This haven of tranquillity, home now to Episcopalian, Baptist, Church of God and Lutheran students, to name some of the 15 participating denominations, struggled to survive the double blows of the Cuban revolution and the subsequent withdrawal of funding by the Episcopal Church of the United States of America (ECUSA) in 1967.

Although the seminary had been operating since 1947, in early post-revolutionary times, Christianity became unpopular and suspect under Communist rule.

This trend corresponded with the regime of an Episcopalian bishop “with a closed mind,” said Clara Luz Ajo Lazaro, a feminist theologian whose post-graduate studies at the University in Sao Paulo, Brazil were sponsored by the Anglican Church of Canada.

In the 1960s, she said, because of this bishop, the church stopped working with young people and instead devoted its energies to opposing the revolution.

Mrs. Ajo, and her husband, Rev. Pedro Triana Fernandez, an Anglican priest, are both professors and mentors to students at the seminary.

Their white stucco house, which sits at the heart of the small campus, is open to any of the 187 students and at any given time of day there are students in the rocking chairs, students in the kitchen or students helping Mr. Triana move gas tanks to keep the stove working.

“When I want to prepare lectures,” said Mr. Triana, “I have to close all the shutters and lock the front door, or it just never stops.”

Both professors were sponsored by the Anglican Church of Canada when they went to Brazil to do post-graduate work. Both now have doctorates, and today the Canadian church still pays Mrs. Ajo’s yearly salary – equivalent to about $6,000 Canadian. The salary may seem small but many on Cuba survive on about $15 U.S. a month.

“The investment more than paid off,” said Rev. Philip Wadham, who is regional mission coordinator, Latin America and the Caribbean, within the partnerships department of General Synod. “Look at the dedication of these two,” he said.

At one time, this scene would have been unimaginable. The personal history of Mrs. Ajo and Mr. Triana is intertwined with the history of the seminary, and Anglicanism, in Cuba.

In 1964, Mrs. Ajo, whose parents were originally Quakers, was a student at the seminary. “There were few women in Christian education then,” she said. She found she liked theology and studied with Mr. Triana.

He became a clergyman and they moved to Camaguey where he had a parish. But after a few years, ECUSA pulled the plug and ruled Cuban Episcopalians could not be part of ECUSA. At the same time, revolutionary thinking was frowning on religion, and churches began to empty and close.

“It was terrible,” Mrs. Ajo remembered. “There was no money to pay cleric salaries.”

In 1980, Mr. Triana renounced his pastoral role and the family returned to Matanzas to squeeze in with his aunt.

The two began to teach as volunteers at the seminary on the hill where they had met, even though the school could not pay its professors. They also returned to university to retrain in something that could feed them. Mrs. Ajo studied mathematics and Mr. Triana studied and taught English.

The two began to help with the Student Christian Movement, which Mrs. Ajo describes now as “very strong and very progressive.”

In 1981, she became the first woman president of the Cuban arm of the movement. She declined to be ordained, she said, because “ordained women start to operate too much like men.” She added that she also values her freedom to speak out and agitate for change from outside the church hierarchy.

In 1992 the two went to Brazil to earn their doctorates. She studied feminist theology; he studied Old Testament, which he now teaches at the seminary, as well as acting as chaplain to the Episcopalian students.

The seminary somehow had survived and was supported by the surrounding community. Buildings were donated, and it grew from the original two buildings. Mrs. Ajo said the seminary now has a good relationship with the Cuban government and is fully independent.

The dream is to have the academic work of seminary students accepted at a university level. “At the same time, we want university students to come here. We want to be accepted as a theological faculty,” Mrs. Ajo said.

At present, the seminary’s purpose is solely to train future pastors, and it offers a three-year course.

A problem is the academic standing of the staff. Out of 15 professors, only four have doctorates.

Another difficulty the two have identified is the caliber of some of the students, and the failure of churches to understand the needs of the seminary when they send students with a higher academic standing.

“The churches did not understand and keep sending students with a substandard scholarship level,” Mrs. Ajo said. “Or, we get good students who should be preparing to be professors and instead the church sends them out to the country to do ministry.”

The seminary, which long ago went beyond its original boundaries to accept students from many different churches, has a tradition of hospitality and welcomes seminarians and Christians from all over the world. It also hosts meetings and international workshops.

Seminary students help out with painting and cleaning at a local school for disabled children, and the seminary offers extension courses on faith and theology out in the community, although there is a shortage of books – a common problem in educational facilities in Cuba.

As well, the seminary hosts an annual Easter sunrise service for the community on its lawns. Last year more than 1,000 attended.

The seminary has five chairs of theology, Bible study, pastoral care, history and social and historical studies of Cuban culture. A volunteer board oversees administration and finances.