Home » All eyes on Anglican-Lutheran celebration

All eyes on Anglican-Lutheran celebration 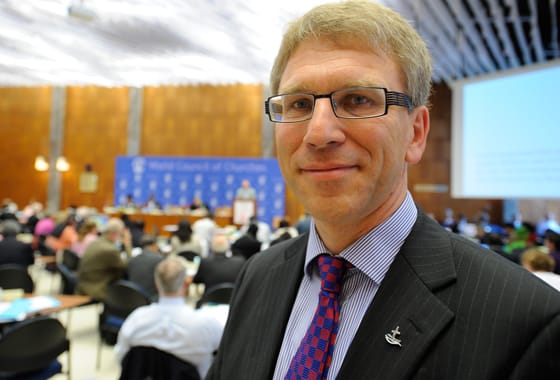 The Rev. Olav Fykse Tveit, general secretary of the World Council of Churches, wrote that he “hoped the significance of these bilateral relationships is felt in other churches….” Photo: Peter Williams/WCC

Two parishes, St. Paul’s Anglican in Fort Erie, Ont., and Holy Trinity Lutheran in Buffalo, N.Y., held simultaneous services at 3 p.m. to honour the call to a common mission first made in the Waterloo Declaration of 2001.

And the celebrations did not go unnoticed in the international church community. “The eyes of the world were on this service,” said the Rev. Donald McCoid, a member of the executive for ELCA ecumenical and inter-religious relations. At the close of ceremonies in Buffalo, he read out congratulatory statements from the general secretary of the Lutheran World Federation and the general secretary of the World Council of Churches , who commended the two denominations on their decade of working together in unity and Christian mission. “Years later, your churches have much to celebrate—shared ministries between Anglican, Episcopal and Lutheran parishes in Canada and the United States,” wrote the Rev. Martin Junge, general secretary of the Lutheran World Federation. Of the courageous decisions that set this cooperation in motion, he said, “These were truly acts of faith.”

The Rev. Olav Fykse Tveit, general secretary of the World Council of Churches, wrote that he “hoped the significance of these bilateral relationships is felt in other churches and that local churches and parishes can celebrate that they are part of this ecumenical statement.”

Archbishop Fred Hiltz, primate of the Anglican Church of Canada, preached a sermon of the origins, significance and future of the inter-church communion, noting that for young people such interdenominational collaborations will be the norm. “It will be in their DNA,” he said.
The service was hosted by the Rev. Dr. Charles Bang, pastor at Holy Trinity. The presider was Bishop Mark S. Hanson, presiding bishop of the ELCA.