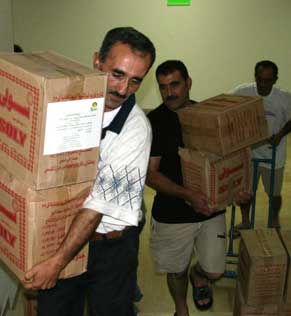 Aid workers worry that it is becoming increasingly difficult to get aid out to those in need in Lebanon. Recently, in the Lebanon warehouse of the Middle East Council of Churches (MECC), there were only enough supplies for three days.

The Primate’s World Relief and Development Fund (PWRDF), the relief and development arm of the Anglican Church of Canada, has sent $25,000 in response to an appeal made by a global alliance of churches sending relief to civilians uprooted by the Israeli offensive in Lebanon.

Action by Churches Together (ACT) International has set an appeal target of $4.8 million US ($5.5 million Cdn) to provide emergency relief and assistance to hundreds of thousands of Lebanese left homeless after heavy fighting erupted July 12 between Israeli forces and the Lebanese militant group Hezbollah.

Church leaders worldwide have called for an immediate ceasefire in the conflict, in which more than 400 Lebanese and about 50 Israelis have died. Nearly a third of the casualties from both sides have been children, according to media reports quoting United Nations emergency relief co-ordinator Jan Egeland.

Israel launched a massive air campaign against Lebanon after a Hezbollah raid that killed eight Israeli soldiers and captured two others.

The Israeli military operations targeted all regions of Lebanon, but focused on the south and the southern suburbs of Beirut, a heavily-populated area, ACT International said in its report.

ACT International has been providing emergency aid through one of its members, the Middle East Council of Churches (MECC). It has been sharing food supplies and supplementary nutrition for children, providing mattresses and beddings as well as cleaning and sanitary supplies.

Money sent to the appeal will be used to provide food rations to 6,650 families (about 40,000 people), supplementary food to 13,300 infants and children, mattresses and bedding to 4,000 families, cleaning supplies to 6,500 families, kitchen utensils to 100 displacement centers, clean water to 40,000 people and diapers to 13,300 babies.

“The humanitarian situation is catastrophic. We have almost one million people living as refugees in makeshift buildings, such as churches, parks or schools,” said Aline Papazian of the MECC.

In a report filed to the ACT International office in Geneva, Ms. Papazian said that trucks carrying food and medicines have been bombed. “We currently rent 10-15 minibuses in order to minimize the risk of being hit. But it is hard to find drivers willing to risk their lives. It is also difficult to find petrol, which has become enormously expensive,” she said.