A quick response to two calamities 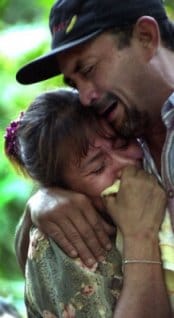 Gilda Funes and her husband Jose Cruz embrace as six of their immediate family members, three from her side and three from his, are lowered into a common grave in Santa Tecla, El Salvador in January. The earthquake was one of two that drew a quick response from PWRDF and other international agencies.

Canadian Anglicans have responded quickly to help victims of two natural disasters which happened in the space of three weeks, in two different parts of the world.

In India, the Primate’s World Relief and Development Fund (PWRDF) immediately made an initial grant of $15,000 to assist victims of the January 26 earthquake disaster in the state of Gujarat. As the estimated death toll rose from an estimated 10,000 to more than 100,000, PWRDF said it expects that more grants will follow.

The PWRDF grant was part of a larger grant of $100,000 from Action By Churches Together (ACT), a worldwide alliance of churches and related agencies with a coordinated emergency response system.

ACT sent emergency teams to the devastated area in India to create shelters and distribute food and other relief items such as blankets, clothes, and water. A mass exodus from the area from those fearing aftershocks was reported just days after the huge quake, which measured 7.9 on the Richter Scale. Meanwhile, former residents were flooding in to the area to try to find family members and salvage belongings.

The earthquake in India was the area’s worst since 1956.

It pushed an earlier quake in El Salvador off the front pages and effectively out of the news. That quake, which struck on January 13, killed an estimated 700 people, destroyed thousands of homes, injured a further 400 and left at least 1300 missing. Over 1,000 were reported missing in an area west of the capital where a mile-long landslide buried hundreds of homes.

ACT members in El Salvador, the Lutheran World Federation (LWF) were distributing food, blankets, mattresses, shovels and other relief items in two camps in Santa Tecla, for 300 people, and San Salvador, for 3000 people.

By late January ACT said it had helped 14,500 families in 39 communities. ACT said its support focused on those who were already vulnerable before the disaster and to those in the poorest communities.

A 4-year-old girl, a member of La Iglesia Anglicana in El Salvador was killed in the quake. Church property was heavily damaged. Dean Luis Serrano of the pro-cathedral at San Juan la Evangelista, was preparing for Sunday worship when the quake struck Saturday morning.

Huge cracks appeared in the walls of the church, forcing the congregation to meet on a nearby patio the next day. Dean Serrano said the community was devastated.

In the secular fundraising relief efforts in Canada, the Indian earthquake was culling far more donations than the El Salvadoran quake.

Relief spokespersons for the Red Cross and other agencies attributed the swell of donations to front-page coverage in the media, and to the greater magnitude of the disaster. All expressed fears that the donations would drop off once the disasters are no longer front-page news.