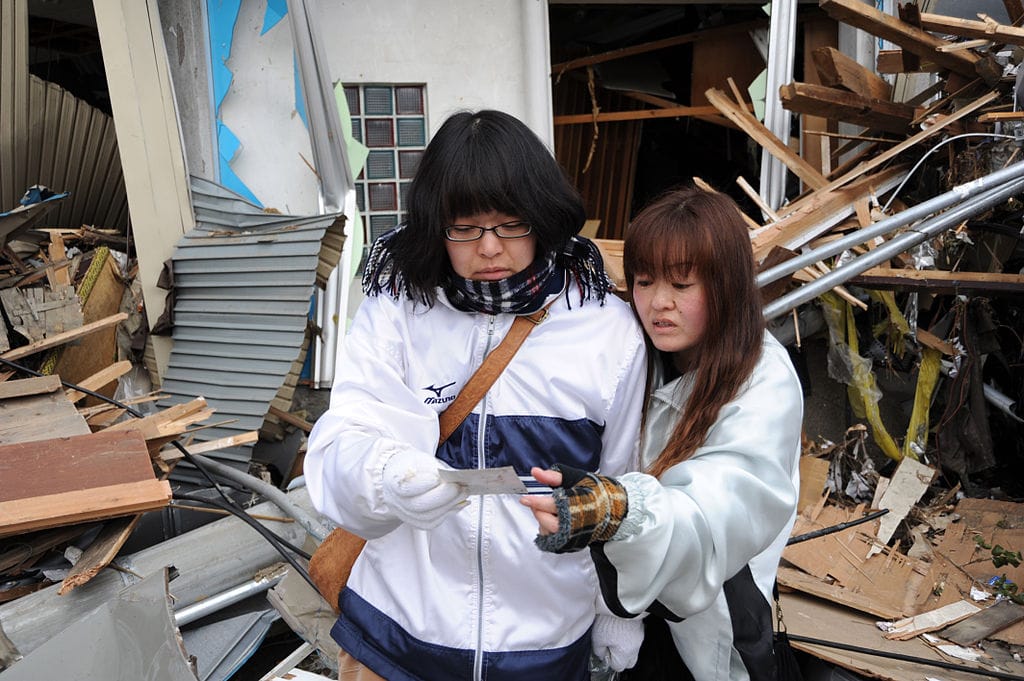 A mother and daughter look at a family photo amid the wreckage of their home after the powerful earthquake that struck Japan last year. Photo: U.S. Navy/1st Class Matthew M. Bradley.

Tokyo — A nation paused in grief on March 11 as Japan marked the one-year anniversary of the magnitude-9.0 earthquake, tsunami and nuclear accident that took 19,000 lives and triggered a continuing reconstruction crisis.

As Prime Minister Yoshihiko Noda reminded the Japanese people that their predecessors "have repeatedly risen up from crises," faith communities throughout the country remembered the victims through prayer and acts of worship.

At the National Theater in Tokyo, Emperor Akihito, who is 78 and recovering from heart surgery, and Empress Michiko joined Noda at a memorial service. Live video feeds connected it with ceremonies in the three northeastern coastal prefectures (states) where the tsunami wave came ashore, causing widespread destruction.

At 2:46 p.m., the time the quake struck, participants at the services linked hands in a minute’s silence, with the sound of sirens in the background.

As of 10 March, the Japanese National Police Agency confirmed 15,854 deaths and 3,155 people missing. The quake and tsunami heavily damaged the Daiichi nuclear power plant in Fukushima, causing radiation leakage. Some 80,000 residents were displaced due to radiation contamination, with one-quarter still in temporary housing.

In total, some 340,000 people are still living in temporary housing in northeastern Japan, where once-busy seaside towns are now cleared, barren lots. However, millions of tons of rubble still awaits disposal and regions around the country are blocking the transportation of waste to their areas, according to media reports, in some cases due to radiation fears.

Among the many faith responses, the Association of Shinto Shrines issued a suggested prayer to be read during memorial ceremonies that described the calamity, pleaded that there be no more disasters and asked that people live peacefully.

The Ukrainian Orthodox Church of the Kyiv Patriarchate read a prayer written by His Holiness Patriarch Filaret to be used in all its churches around the world, marking the common bond of experiencing nuclear disasters (Chernobyl and Fukushima) that links the Ukraine and Japan.

"It was a great honor to be allowed to participate in Sunday’s ecumenical service," said Rev. Paul Koroluck of St. Jude Ukrainian Orthodox Mission in Tokyo. "It is unfortunate that it takes a great tragedy … to break down barriers we have created between our nations, but yesterday I was given hope that the Holy Spirit will continue to work through our hearts so that we may be able to lead to a common future."

He said he was especially moved by Fr. Russell Becker’s homily that communicated the hope of Christ’s Resurrection in a variety of ways.

Cindy Mullins, an American literary agent and publisher living in Tokyo, attended a service at Tokyo’s St. Alban’s Episcopal Church, and commented, "We all came together to mourn as one people."

The Rev. Shotoku Ishikawa conducted a Buddhist memorial ceremony at the Tsukiji Hongwanji Temple in Tokyo, the fifth held by the temple since the disaster.

"Our slogan is ‘holding the grief close and sharing it together.’ This is what the Buddhist priests of Tsukiji Honganji Temples learned from the disaster through various volunteer activities," Ishikawa said. The temple was used as a headquarters for emergency disaster control and sent some priests with food and water to the disaster areas.

After the earthquake, the temple opened its doors for people who were unable to return home. "About 600 people used our temple to spend the night," said Ishikawa. "We offered food and spaces to rest and sleep. Also, we made cell phone chargers available, so people could contact their families or use Internet." He added that the temple later collected donations and held fundraising events.