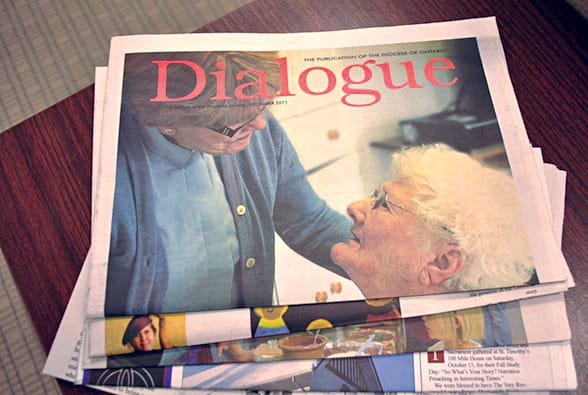 Since 1960, Dialogue has been published 10 times a year in partnership with the Anglican Journal.
Photo: Marites N. Sison

On Nov. 29, the Synod Council of the Anglican diocese of Ontario “suspended” four of its programs and ministries to create a “credible, balanced budget” for 2012.

The diocesan newspaper, Dialogue, as well as the diocese’s summer residential youth program, Camp Hyanto, have been put on hold to “relieve the financial load on the diocese,” said Bishop Michael Oulton in a letter issued to parishes Dec. 3.

The other two items put on hold include the children and youth ministry coordinator’s position and new grants to parishes and ministries. In addition, the council removed from the budget the bishop’s discretionary fund grant, the travel reimbursement for the territorial archdeacon and regional dean, and the social action and evangelism allocation. Salaries for diocesan staff and clergy in 2012 will be held at the current level.

“These ministries haven’t been cut,” Bishop Oulton told Anglican Journal. “There are people who will be providing various aspects of a ministry.” He explained that “suspended” means that “there’s some intentionality around looking at that ministry and considering what the way forward is.”

Dialogue, which first published under the name Ontario Churchman in 1960, has been published 10 times a year in partnership with the Anglican Journal. It has a circulation of 5,897. Camp Hyanto has been operating as a Christian residential camp in Lyndhurst, Ont., for the past 64 years. It offers leadership training, specialized programs and daily chapel.

Before the freeze, the diocesan budget for 2012 had a projected deficit of $186,000. The budget now has a projected surplus of $108,000, of which $54,000 will be used to repay a portion of the diocese’s deferred fourth-quarter 2011 proportional giving to General Synod. It will also be used to adopt a diocesan communication strategy and to provide seed funding for new initiatives. The diocese will pay the balance of the deferred commitment to General Synod in 2013.

Whether the suspended ministries will end or assume a new form will be determined during a six-month consultation leading up to the preparation of the 2013 budget, which will be taken to the diocesan synod in November 2012. By then, “we will have a fairly clear sense of the ministries we feel we need to carry forward and how we want to do it,” said Oulton.

In January 2011, about 200 Ontario wardens, treasurers and synod delegates participated in facilitated meetings that asked them to identify the challenges they faced and “what their fears, concerns and hopes are for the future.” The consultations led to the creation of the Task Force on Resourcing Ministry and a finance committee, which prepared the strategy for addressing the projected 2011 budget deficit and for crafting a draft 2012 budget.

Francie Healy, editor of Dialogue, said she is hoping that the suspension is temporary. “There will be people who are hurt by this when they don’t receive their printed Dialogue each month,” she noted, adding, “It’s as if we’re caught in the middle of two eras, and it’s tough.”