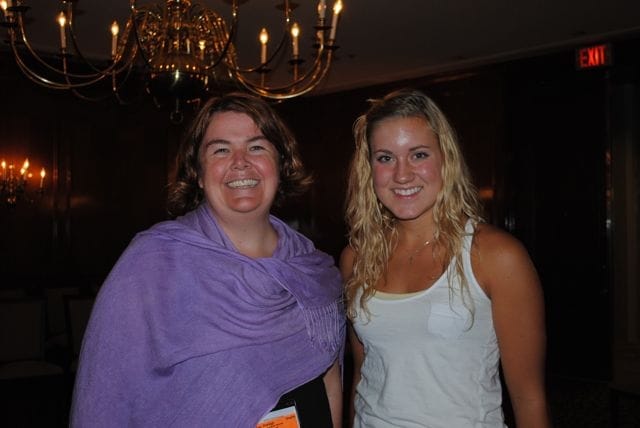 Sixteen-year-old Avery Eramchuk was one of about 85 Anglicans who attended the Canadian Lutheran Anglican Youth (CLAY) gathering in London, Ont. in August. She says the four-day event, the first of its kind and attended by about 1,000 youth, was “amazing.”

“It was almost overwhelming,” she said afterward from her home in Clandeboye, Man. “Just the energy. And you have something in common with everyone there, so you automatically feel connected.”

A number of keynote addresses, delivered by the Rev. Canon Bill Cliff, were a highlight for Avery. “What he said really got to me,” she said, praising his ability to speak about scripture in a way that she could easily relate to.

The gathering also included many small forums and discussion groups. Two that Avery attended seemed tailor-made for her interests, including a songwriting workshop.

Avery plays piano, guitar and sings. And in April, she and two young friends from St. George’s Anglican Church in Wakefield, Man.-Real Jolicoeur and Jana Charlo-organized a fundraiser to help victims of the earthquake in Haiti. They played music along with a couple of local bands and organized a silent auction. The event attracted several hundred people to a hall in Selkirk and raised about $1,500, said Avery.

That money went to the Red Cross, but the next fundraiser -a candlelit night of acoustic music, possibly held in St. George’s-could benefit the Primate’s World Relief and Development Fund (PWRDF), said Avery. Sheilagh McGlynn, PWRDF’s justgeneration.ca facilitator, offered a presentation at CLAY that, among other things, demonstrated the unequal distribution of wealth in the world. Avery said she learned more about PWRDF but was also pleased to discover “that there are other people who care about the same things….[It] meant a lot to me.”