Home » Where God wants her to be

Where God wants her to be 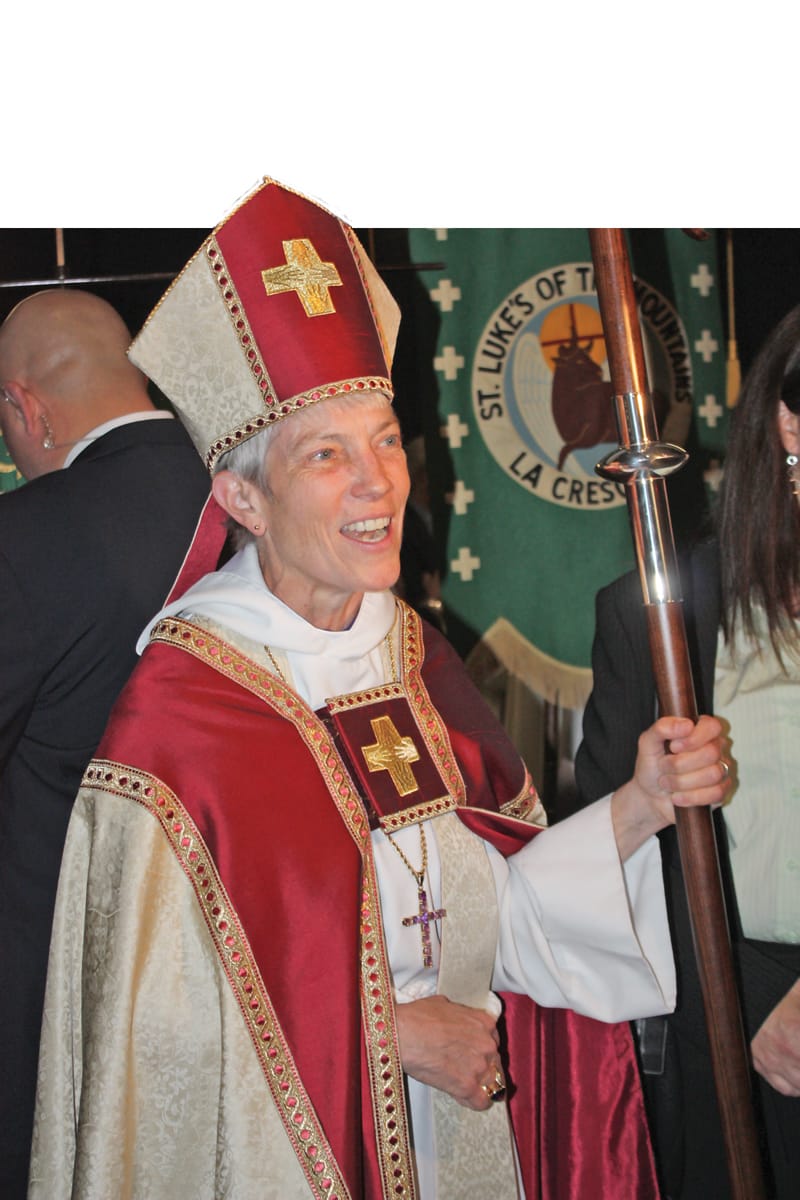 The Rt. Rev. Mary D. Glasspool at her May 2010 ordination as the bishop suffragan of the diocese of Los Angeles.
Photo: contributed

Spending an hour with the Rt. Rev. Mary D. Glasspool is an uplifting experience. As you leave the Echo Park office of the warm and charming new bishop suffragan of the Episcopal diocese of Los Angeles, your step’s a bit lighter, your perspective a bit sunnier-maybe the world isn’t such a bad place after all.

This past summer, Bishop Glasspool, 57, completed her first year of office in one of the U.S.’s largest and liveliest Episcopal dioceses (147 parishes and missions). Looking at once both elfin and elegant in a black jacket, skirt and court shoes, she projects a presence much larger than her petite frame.

Glasspool is not the first female bishop in the diocese; her colleague the Rev. Canon Diane Jardine Bruce, who ordained her, precedes her as a bishop by a couple of months. But she is the first openly partnered lesbian bishop.

On those grounds, Archbishop of Canterbury Rowan Williams urged the American church not to proceed with the ordination, warning that it would further alienate traditionalists in the Anglican Communion who consider active homosexuality a sin.

Glasspool had doubts herself, as she began to acknowledge her sexual orientation during her post-secondary years. “Did God hate me? Or did God love me?” wondered the traditionally raised college student.

Glasspool was born on Staten Island and raised in the upstate town of Goshen. “Both my parents modelled a profound faith in God, which was a gift they gave to me,” she says.

Her father was an old-school Episcopalian rector, whose answer to the question of women priests “was a resounding no,” she recalls.

But two things marked her path during her college years, 1972 to 1976. She felt an urgent calling to the ordained ministry and was blessed in meeting Rev. Barbara Chaapel, a Presbyterian minister from Princeton who was serving as the college’s assistant chaplain. Chaapel provided “incarnational and relational” proof that her once impossible dream could be realized.

Glasspool graduated from Episcopal Divinity School in Cambridge, Mass., near Boston, in 1981 and was ordained in 1982. In Boston she met her life partner, Dr. Rebecca Sander, recently a social work professor at the University of Maryland.

Glasspool served as an assistant rector or rector in parishes in Philadelphia, Boston and Annapolis. In 2001 she went on to become canon to the bishops of the Baltimore-based diocese of Maryland. “I believe there is a significant part of me that is and always will be a parish priest,” she says.

Consecrated in May 2010 and taking up her post as bishop suffragan in July, Glasspool now has no dearth of contact with parishes, serving the clergy and congregations of the almost 150 parishes and missions in the far-flung diocese. Driving, flying, preaching, teaching, presiding over confirmations, installing new rectors on week nights and weekends, the tireless bishop also serves the diocese’s network of creative and dynamic parochial schools. “I’ve made it a priority for the first two years to get to know the diocese as well as I can in order to serve it better,” says Glasspool, who is responsible for the northern areas of Santa Barbara and Ventura counties.

Another exciting aspect of her work is with the diocese’s vibrant program of inter-religious and ecumenical affairs. “I thrive learning about Muslims, Sikhs, Buddhists and Zoroastrians,” she says, but adds that the experience has only deepened her commitment to her Christian roots.

Unsurprisingly, Bishop Glasspool is deeply involved in the church’s advocacy for lesbian, gay, bisexual and transgendered people. One of the great boons of serving in a liberal diocese is that her life partner of almost 25 years has been able to join her openly, which was not the case in earlier postings. “At St. Margaret’s in Annapolis, Becki was invisible as far as the parish was concerned,” she says.

Glasspool has become a standard bearer of the modern inclusive church and she’s enjoying it. “It’s fun to be a symbol but even more gratifying as that symbol to experience people being liberated from old prisons,” she says.

A high point of her ministry’s first year was a ceremony at which a lesbian couple, one nine months pregnant, were being confirmed and received, respectively, in the Episcopal church. “They both had been raised Roman Catholic and both had grave doubts because they’d been raised to believe they were going to hell,” she recalls. Glasspool asked them to write down a list of troubling questions and then preached her sermon in response.

“There were tears all round. It was a watershed experience for me and for this young couple embarking on a new life,” she says.

The bishop is blessed to find herself deep in the moment, living her personal kairos. “I’m thrilled and excited to be at the right time in the right place with the right people,” she says. “I feel I’m where God wants me to be.”