Home » Reflection: When You Feel Inadequate

Reflection: When You Feel Inadequate 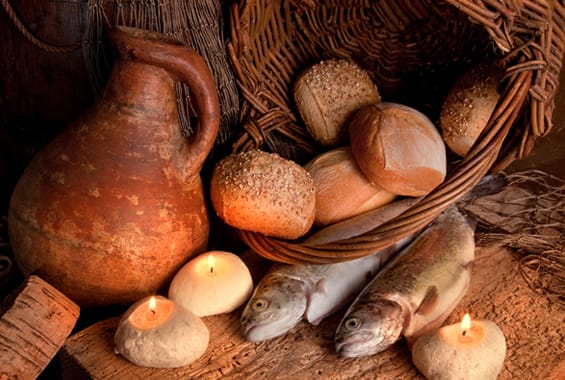 “When life seems too big and I feel too small, there is One who can take my paltry little handful of loaves and fish and turn them into a feast.” Photo:Anyka

“We have nothing here but five loaves and two fish” (Matthew 13:17). There we hear it: the response of the ages when people feel overwhelmed by the world around them.

It is the response of parents worried about their child. I hear it all the time as a priest: the helplessness that parents feel about their children growing up in a world out of control-a world where peer-pressure, media influence, drugs and consumerism have more influence on children than their parents. So many influences, so many temptations…. What are parents to do? “We have nothing here but five loaves and two fish.”

It is the response of the small business owner in the face of a changing economy. How can he compete with the big chain store that has just opened, the one advertising, “Twenty thousand items under one roof”?How can he keep the little family-owned store open? After all, he has “nothing but five loaves and two fish.”

It is the response of the spouse desperately trying to make peace in a troubled marriage, and who grows weary of being the only partner working at the relationship.

It is the response of the student who finds life on campus so demanding that he or she no longer knows how to cope.

It is the response of the child who sees the parent she deeply loves now slowly slipping away because of Alzheimer’s, and there isn’t anything anyone can do about it.

It is the response all of us sometimes offer when life seems larger than our ability to handle it. “We have nothing here but five loaves and two fish.”

What can we do?

Certainly, that was the response of the disciples when five thousand men-besides women and children-followed Jesus into the wilderness. They had come to listen to Christ’s words, to feel his healing touch bring their broken lives back to wholeness. And now, the story says, the hour had grown late and they were hungry. So Jesus says to the disciples, “You give them something to eat.

Well, that’s the rub, isn’t it? Jesus is always asking more of us than we have to give, as spouses and parents and workers, and on and on. He calls us to love, even when loving is difficult-to forgive, even when we have been wronged; to witness our faith, even when we may be laughed at; and to stand firm on our principle, even when it means standing alone. And those things aren’t easy to do. After all, we are not Jesus. Our powers are not unlimited. “We have nothing here but five loaves and two fish.”

Fortunately, for the disciples and for us, the story does not end there. “You give them something to eat,” he said. And the disciples answered, “We have nothing here but five loaves and two fish.”

Then Jesus said, “Bring them here to me.” The Bible goes on to say: “Taking the five loaves and two fish, he looked up to heaven, and blessed and broke the loaves, and gave them to the disciples, and the disciples gave them to the crowd. And all ate and were filled; and they took up what was left over of the broken pieces, twelve baskets full.”

There is the good news for you moms and dads who find yourselves wondering, “Do I have what it takes to parent these kids?” The answer is no, we don’t have what it takes. At best, in the face of overwhelming odds, “We have nothing here but five loaves and two fish.”

That’s the good news for spouses in troubled marriages faced with tough decisions…and for students who always feel as though they are swimming upstream…and for people of conscience who feel called to take a risky stance on some public issue. What is one person against city hall, anyway? When accompanied by Jesus, one person can be a majority.

I have a friend who is a United Church of Christ minister in Pennsylvania. He told me of a time when he made visits to three parishioners in one day. The first parishioner was barely 50 years old and dying of cancer. The second had had a heart attack. She was new in the area and very lonely. The third parishioner was a 76-year-old man whose handicapped wife had recently died.

That day, the minister had a remarkable experience. All three persons said to him in effect, “I don’t know how anyone could make it through this without Jesus. He has given me strength and hope and courage.” Those three people knew what it is to have nothing but five loaves and two fish. And they also knew that Jesus could make all the difference in the world.

When Sir Harry Lauder’s only son was killed in World War I, he said to a friend, “When a man comes to a thing like this, there are just three ways out of it-there is drink; there is despair; and there is God. By his grace, the last is for me.”

Harry Lauder knew how Jesus could make a difference in an impossible situation.

I wonder about us. When life gets the best of us, perhaps it is because we focus too much on how little we can do and too little on how much Jesus can do.

When we were living in San Diego, Heather and I purchased a CD shelf from IKEA. Now, if you know anything about IKEA, you know that although the furniture is quite attractive and reasonably priced, you have to assemble it yourself.

Well, I brought the box upstairs to my den, where I proceeded to take out all the parts and line them up, then begin assembling. I spent much of the afternoon and evening trying in vain to assemble this CD shelf. Every time I thought I had it, there was another glitch, and I had to start all over again. This repeated itself several times, until I began to get frustrated, then discouraged. Here I was, a priest with five academic degrees, but I couldn’t manage to put together a CD shelf! Finally, Heather rescued me from the project by luring me away for a bowl of ice cream. Once she had me in the kitchen, she offered me some advice, “Call someone who knows what to do!”

The truth is: I can’t always assemble the furniture, not even a CD shelf. I can’t always heal broken hearts or open closed minds or change unjust social systems or renew the church or right all wrongs or love the unlovely all by myself. Can you? Instead, in the face of those obstacles (and a thousand others like them), I find myself throwing up my hands in despair and saying, “What am I supposed to do? I have nothing here but five loaves and two fish!”

But, what I do have (and what we all have) is the freedom to call on the One who knows what to do. When life seems too big and I feel too small, there is One who can do what I cannot. One who can right the wrongs and heal the hurts and love the unlovely and scale the mountains. One who can take my paltry little handful of loaves and fish and turn them into a feast. However little I may possess in terms of talent or resources, Jesus says, “Bring them here to me, and with my help, your little becomes a lot.”