Home » What happens when an archbishop is enthroned?

What happens when an archbishop is enthroned?

The modern term would be inauguration, but ‘enthronement’ remains appropriate: this ceremony is all about the Archbishop of Canterbury ‘taking his seat’ – in fact, two seats. 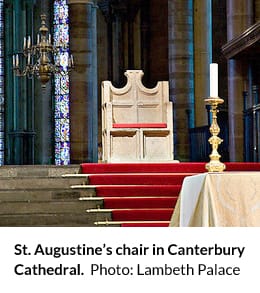 The Archbishop of Canterbury Justin Welby’s public ministry will commence on Thursday when he is enthroned – or ‘installed’ – in two special seats in Canterbury Cathedral.

First, the Archbishop will be installed on the Diocesan throne as the Bishop of the see of Canterbury, the oldest diocese in the English church. He will then be installed on the chair of St Augustine as Primate of All England – the ‘first bishop’ in the country. This latter enthronement has also come to respresent the Archbishop’s inauguration as the spiritual leader of the worldwide Anglican Communion.

The ceremony will be attended by Prince Charles and the Duchess of Cornwall, the Prime Minister, and archbishops and bishops from around the world. Representatives of many other faiths will also be present.

The notion of a ‘seat’ dominates the ceremony enthroning an Archbishop of Canterbury. The very word cathedral comes from the Latin cathedra, for the seat where a bishop would sit to teach the faith to the people of the diocese. Another word for diocese is See, from the Latin, sedes – seat or chair.

While a cathedral plays many roles, essentially it is the church where the bishop’s seat is – the particular church of which he is appointed bishop and pastor.

In this respect, the enthronement of the Archbishop of Canterbury has much in common with that of any bishop in any cathedral.

But what is especially important about this Thursday’s ceremony is the seat in question: the chair of St Augustine is the primatial seat of the Church of England – a primacy in the English church which has lasted since St Augustine came to preach in England at the orders of Pope St Gregory the Great in the 6th century, and has had significance almost from the beginning far beyond the shores of the British Isles.

Three knocks on the door

At 3pm on Thursday, while Archbishop Justin waits outside the cathedral’s west door, the Dean of Canterbury Cathedral, Robert Willis, will be inside reading out a letter from the Queen, Supreme Governor of the Church of England. This letter authorises the Dean and cathedral community representatives to go to the church’s west door to greet the Archbishop.

The Dean then presents the Archbishop with the ancient Canterbury Gospels, brought to England by St Augustine in 597, on which he will swear faithfulness.

The Archbishop is then enthroned on his seats, marking the core of the ceremony.

First he is led to the Diocesan throne and installed by the Archdeacon of Canterbury as Bishop of the See of Canterbury. He is then led to the chair of St Augustine where the Dean installs him as Primate of All England.

Having been installed, Archbishop reads the Gospel and preaches a sermon from St Augustine’s chair.The service will feature music chosen by Archbishop Justin, including hymns marking Passiontide and looking forward to Holy Week, which starts next week. It will also include an African song, and improvised organ music following the Archbishop’s sermon.

Archbishop Justin has chosen to wear robes originally designed and made for the late Bishop of Peterborough, Ian Cundy. These were bought as a gift for Ian from the students and staff at Cranmer Hall, Durham where the Archbishop was a student. Archbishop Justin wears them in gratitude to a teacher and bishop who had a formative impact on his ministry.

The robes’ design is based on the first miracle that Jesus did at the wedding in Cana. The blues and purples represent water changing into wine, as well as baptismal waters. The three fish suggest the Holy Trinity, while serving as a reminder to Christians to be partners in mission as fishers of men. The robes were designed and made by Juliet Hemingray.

The date of the ceremony resonates in several ways: March 21st is the feast day of St. Benedict of Monte Cassino, a significant figure for both Canterbury Cathedral and Archbishop Justin himself, who is an oblate of the Order of Benedict. A thousand years ago, the cathedral was a Benedictine monastery.