Home » We have to bite the bullet and move forward,’ says B.C. dean

We have to bite the bullet and move forward,’ says B.C. dean 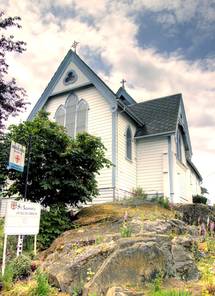 St. Saviour’s Church is one of 10 Anglican churches in Greater Victoria being recommended for closure in a report released by the diocese of British Columbia.

“My first reaction was just a real sense of wanting it all to be over and crawling in a hole and pulling the covers over my head,” says Peter Gibb, the People’s Warden at St. Saviour’s Anglican Church in Victoria.

That was his feeling when a report from the diocesan transformation team recommended St. Saviour’s as one of 13 churches in the diocese of British Columbia to be dis-established and its building sold or leased. The news was not unexpected. In response to dwindling numbers of people in churches, the diocese has been discussing the necessity of such changes for a number of years.

Dean Logan McMenamie of Christ Church Cathedral has been overseeing St. Saviour’s since its last rector left in December. “[He] reminded us that our church has been operating on the margins for at least 20 years,” says Gibb. Still, this final blow was still painful.

Similar struggles are happening in parishes throughout the diocese. Dean McMenamie acknowledges the sense of loss that parishioners feel. But he said, the “genius of the report” is the idea of creating hub parishes-in a region where all of the parishes are dis-established, everyone will be invited into one church, which will be renamed and rededicated. “The opportunity is there,” he said. “We’ll see these parishes like St. Saviour’s that have been struggling with 20 people, wanting children, wanting young families, wanting vibrant ministries, and it’s really not going to happen with that many people. That will only happen with a new critical mass coming together.”

But even in the margins, the parish is a vital part of the community. St. Saviour’s has been home to the Rainbow Kitchen, which serves healthy meals to people who have trouble providing that for themselves, including seniors, people who have disabilities or who may be unemployed or homeless. The kitchen has become a multi-faith effort with more than 100 volunteers from the Buddhist and Ismaili communities, the Salvation Army, as well as the broader population. Gibb says St. Saviour’s commitment to this ministry is helping parishioners move forward. “It is a time for us to really try to find the roots of our faith and continue to express that as a community and to the larger community. So we are even more determined to focus all of our energy into the one ministry that we all agree must continue and that’s the operation of the Rainbow Kitchen.” The hope is that the program will eventually become an independent society.

Dean McMenamie planned to meet with the rector of St. Paul (Esquimalt) designated to become the hub church in the area to see how the transition could be made as smoothly as possible for both communities. “We have to bite the bullet and move forward. It will be a very good learning experience, not only for us in this diocese but I suspect for the rest of the church, in how we handle this and what happens when we come through on the other side of this.”

The diocese undoubtedly has some emotional times ahead before it gets to the other side. Preparing to make decisions based on the transformation team’s recommendations at the diocesan synod, March 5 to 7, other parishes still want find a way to avoid dis-establishment and closure.

Rev. Richard Stetson, who is the rector for a Salt Spring Island parish that includes three churches, says people in his parish were surprised by the report’s recommendation to close St. Mary’s and St. Mark’s and to use All Saints-by-the-Sea as a hub church. Because the parish pays its apportionment to the diocese every year and had a substantial surplus from its givings in the last year, Rev. Stetson said parishioners did not expect to be affected by the report. St. Mark’s has an average Sunday attendance of 25 to 30 people who are strongly attached to the Book of Common Prayer, and Rev. Stetson says that the proposed changes would probably mean losing parishioners.”We could institute prayer book service at All Saints if they do close St. Mark’s, but for some people, they wouldn’t find the atmosphere the same and they wouldn’t come,” he says. The parish has entered a dialogue with the diocese to determine if an alternate plan could be proposed to avoid the closures. “We are certainly willing to work with the diocese whatever the final decision is, but I don’t see any advantage for us,” he said.

Salt Spring Island may take some encouragement from the experience of parishioners at St. Mary of the Incarnation in Metchosin. Rev. Dr. Larry Scyner said that two years ago, the church lost 80 percent of its members when they left to join an Anglican Network in Canada congregation. “We moved from 250 members to 45,” he says. Many of the people who left had come to the church from outside the local area, which left a small but strong core group of local people left whose families have been Anglicans for generations, said Rev. Scyner. Numbers are slowly creeping back up and the congregation has been able to afford to keep him, as a retired priest, on a part-time basis as well as doing repairs and maintenance on their buildings. He and the parishioners had the impression that they would be given time to rebuild, so they were upset when the report recommended closing the church. When the transformation team met with affected clergy, Rev. Scyner said he made “a rather impassioned plea for reconsideration from the team.” The bishop spoke with him and the team altered its recommendation. “I think the encouraging thing at least for some people in the diocese will be that the diocesan transformation team is willing to listen to alternative proposals and to respond positively,” he said.