Home » Walking in the footsteps of Jesus

Walking in the footsteps of Jesus 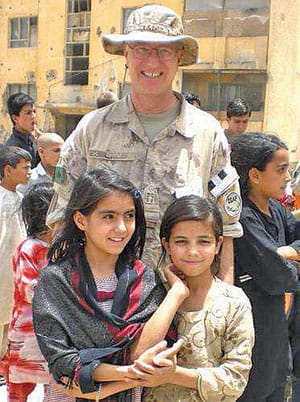 “I never thought of myself as a military kind of guy,” confesses Major Doug Friesen, the Formation Chaplain in Esquimalt, B.C. He first joined the military chaplaincy in 1986 after his term ended as the priest at St. Peter’s Anglican in Brockville, Ont. He had signed up for a pastoral education program but was having second thoughts.

Then a military chaplain friend asked him if he’d like to jump out of an airplane.

He signed up for a six-year contract and never looked back. Today he oversees 10 chaplains of different denominations working in the navy. (Friesen’s wife, Jeanine, is also an Anglican priest and just joined up as a chaplain.)

During the first Gulf War, Friesen was sent to Doha, Qatar, where he served fighter pilots flying CF-18 army jets. Talking to a fighter pilot who was dropping bombs was extremely challenging, says Friesen. The pilot was Anglican and very troubled by the moral implications of what he was doing.

“Who knew we were going to have to use this training?” asks Friesen. “I don’t think a lot of us thought we were actually going to see combat situations.” But chaplains go wherever there is a need. So when Two Brigade-an army unit in Petawawa, Ont.-was shipped out to Afghanistan, Friesen went too. The deployment lasted 10 months.

The environment in Afghanistan is hot, dry, rocky and mountainous. The culture is tribal. Friesen calls his time there “the closest experience I’ve ever had to walking in the footsteps of Jesus.”

The other aspect: constant danger. “You can’t go out and mix and mingle with the locals,” he notes. This makes it difficult to establish a rapport with local religious leaders. A walk down the street could be your last, thanks to the omnipresence of IEDs-improvised explosive devices.

The entire Afghan mission has raised big theological and existential questions and the troops are asking them of the chaplains. The reality, says Friesen, is there are no easy answers for any of them.

“Are we really making a contribution?” asks Friesen. “Are we doing more harm than good? These are huge theological questions that all the chaplains and all the soldiers are dealing with.

“All you can do is walk with them. It’s challenging to your faith and those challenges deepen your faith.” Ω

What are the Lambeth Calls?

Sexuality questions ‘will not be solved’ at Lambeth: Welby