Home » ‘Tree of Emotions’ at TRC

‘Tree of Emotions’ at TRC

Montreal–The first thing one notices upon entering the room is a small wooden tree standing against a blown up image of a group of native children staring glumly at the camera.

The tree’s branches are strung with wood strips on which words have been imprinted. There are words in blue, among them, courage, espoir (hope), sumonter (to surmount), growth, healing, soulagement (relief), reflection, amour (love), liberation, reussir (to succeed), paix (peace). 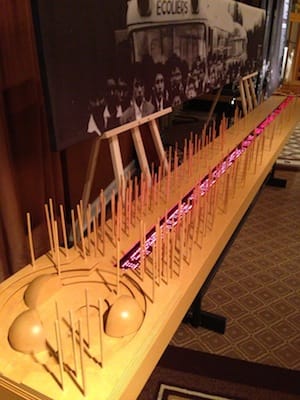 And, there are words in red, including violence, displacement, cauchemars (nightmares), isolement (isolation), vulnerabilite (vulnerability), incomprehension.

The “Tree of Emotions” as it is called, is part of Red Memory, an exhibit created by the Huron-Wendat Museum for the First Nations of Quebec and Labrador Health and Social Services Commission, which was on display at the Truth and Reconciliation Commission (TRC) of Canada’s Quebec national event, April 24 to 27.

The words came from former students themselves, who were asked to express what they felt about their experience at the schools, said Isabelle Sioui, a member of Wendat First Nation, who welcomed visitors to the exhibit at Fairmont The Queen Elizabeth Hotel. The letters in red express negative emotions and the blue, both positive and neutral ones, she said. “Sometimes they can feel both, so some branches have both blue and red words.”

A diorama showing a long road between a cluster of igloos and a large wooden structure of a school depicts the “immense distance between the children and their parents” which resulted from the residential school experience.

“The departure was the beginning of a voyage to the unknown. The road to the residential school was also a long one. A journey by bus might continue by train and end with another bus,” said an explanatory text. “…Often the children didn’t understand the reason for the separation.”

A storage full of small suitcases, some with moccasins and handmade dolls, and beside it, a closet with neatly folded uniforms then depicts the next theme of isolation. “On arriving in the dormitory, the suitcases carefully prepared by parents were taken away, without even being opened, and stored far from the children,” said the text. “…The loss of identity was taken a step further when the names of the children were replaced with a code, composed of the first letter of the given name and a number.” The children would be identified with that code, which was also marked on each item of clothing and object they received, it added. 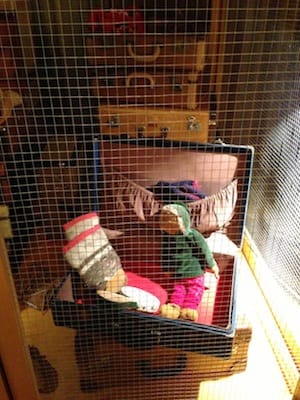 The theme of homecoming explores what happened when the children returned to their communities for the summer. They could no longer communicate with their parents and vice-versa, and they found it difficult to relate with traditional life and ways, explained the text. A diorama shows rows of beds and rows of wooden desks and chairs, which were by now what the children considered familiar.

As for their memories, the exhibit says the children had mixed emotions. Most remembered the food “repeatedly described as insufficient and mediocre.” Others remembered some good times, with hockey being “a source of happy memories” for some, and participation in a school band or music group, “a teacher who encouraged a passion,” for others.

Organizers hope that the exhibit will “mark the beginning of a new dialogue process between all of the First Nations and the non-aboriginal peoples of Quebec and Canada.”

For more information about the exhibit, contact the First Nations of Quebec and Labrador Health and Social Services Commission here.