Home » Toronto gives thanks for the life of British evangelist

Toronto gives thanks for the life of British evangelist 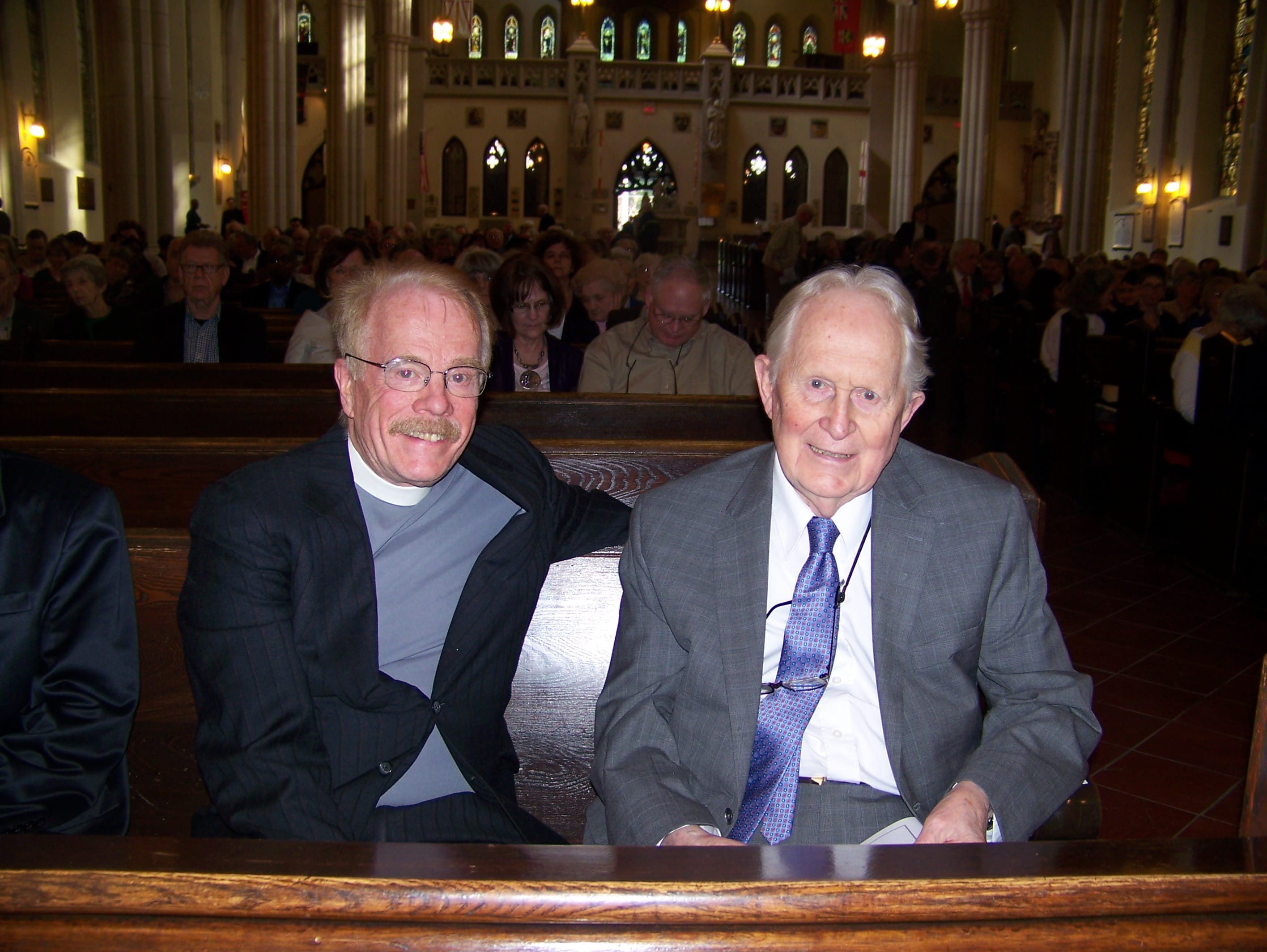 The Rev. Dr. A. Donald MacLeod (left) and Dr. Gerald Griffiths get ready to speak to a packed house at a Toronto thanksgiving service for the late great Christian evangelist John Stott. Photo: Diana Swift

On March 25, a packed congregation at St. Paul’s Bloor Street in Toronto offered thanks for the life of the influential British evangelist John Robert Walmsley Stott, who died last July at age 90.

The huge church reverberated with song and organ music as speaker after speaker paid tribute to the life of this brilliant but humble man, who by his disciplined example, copious writings and clear exposition of scripture brought the gospel of Christ to so many over the course of his lifetime.

Stott’s old friend, Dr. Gerald Griffiths, former pastor of London’s Metropolitan Tabernacle, recalled Stott’s genuine joy as a young curate when two young congregants came forward to accept Jesus at a Sunday service in his home church of All Souls, Langham Palace, London. “John Stott was an evangelist,” said Griffiths. “For him preaching and conversion were absolutely necessary for a healthy church and the only way to grow was to preach the word of God consistently.”

Griffiths recalled how at a pastors’ lunch, Stott spoke of Martin Luther’s igniting the “reformation that transformed the western world. The reformation did not happen because of political manoeuvring; it was due to the preaching of Martin Luther.”

Luther said that he taught and wrote and preached the word of God. “Other than that I did nothing. The word of God did it all.” Griffiths noted that John Stott was like Luther in those three things.

With typical humility, Stott felt he was a poor preacher, and was often seized with “communication frustration,” said Griffiths. Stott once said, “I seldom came down form the pulpit without a sense of partial failure because I cannot express what I deeply feel, and I ask God to forgive me.”

Griffiths called Stott a “man of many parts. Everything he did had the touch of the master.”

The Rev. Dr. A. Donald MacLeod, research professor of church history at Tyndale Seminary, spoke about Stott’s powerful lectures, which attracted many university students to Christianity from the 1950s to the late 1970s and helped grow attendance at the Urbana College conferences from hundreds to many thousands. It was out of his university lectures that his seminal book Basic Christianity came to be. “He energized our staff for student ministry and sparked the Canadian movement,” MacLeod said.

Stott was a man of razor-sharp intellect and great discipline and organization, who used every moment of the day to the utmost. He was also very mindful of strategy. “He taught us to use our resources strategically and to see the wider picture, while keeping Christ as the epicentre of all we do,” said MacLeod.

Tyler Wigg-Stevenson, Stott’s former study assistant and a doctoral student at Toronto’s Wycliffe College, recounted how young men “were run ragged trying to keep up with their exacting employer.” He extolled Stott’s gentle humour, simplicity and proximity to God. As his health and faculties failed, “the more that was taken from him, the greater he became-all he had left was Christ,” said Wigg-Stevenson. “To be near him was to have a palpable sense of eternity.”

The sermon, delivered by Dr. Charles Price, senior pastor at the 4,000-congregant Peoples Church in Toronto, was built around the theme of leadership. “God gives us the gift of example,” he said, citing Hebrews 13:7-17, which exhorts people to “remember your leaders who spoke the word of God to you.” Consider them and imitate them.

Price called John Stott a “man of the book, who prided himself on having nothing new to say but teaching the historical Christian message with clarity, simplicity and certainty. “He was a man you remember because he leaves you with God; he connects you with God.

For Stott, Price said, it is the word of God that takes you back to God. He felt a preacher must have one foot in the biblical past and one foot in the modern world to connect God’s eternal truths with the temporal trends of today. “That was Stott’s skill-in writing and modelling by example,” said Price adding that God made his son incarnate because “He wants his people to live like Christ.” He called Stott the “real deal,” who lived what he preached with authenticity.

Like Stott, Price said, “our spiritual leaders should excite in us a drive to know God and imitate their faith. This desire is caught, not taught. We should try to imitate Stott’s faith and the walk he had with God.”

The Ven. Stephen Nduati, a Kenyan doctoral student at Wycliffe College, noted that through the Langham Partnership, Stott’s zeal for bringing the word of God to the world is still alive. “Brother John’s higher vision is still kept aflame. His mission is still with us to carry forward,” he said.