Home » The war on poverty

The war on poverty 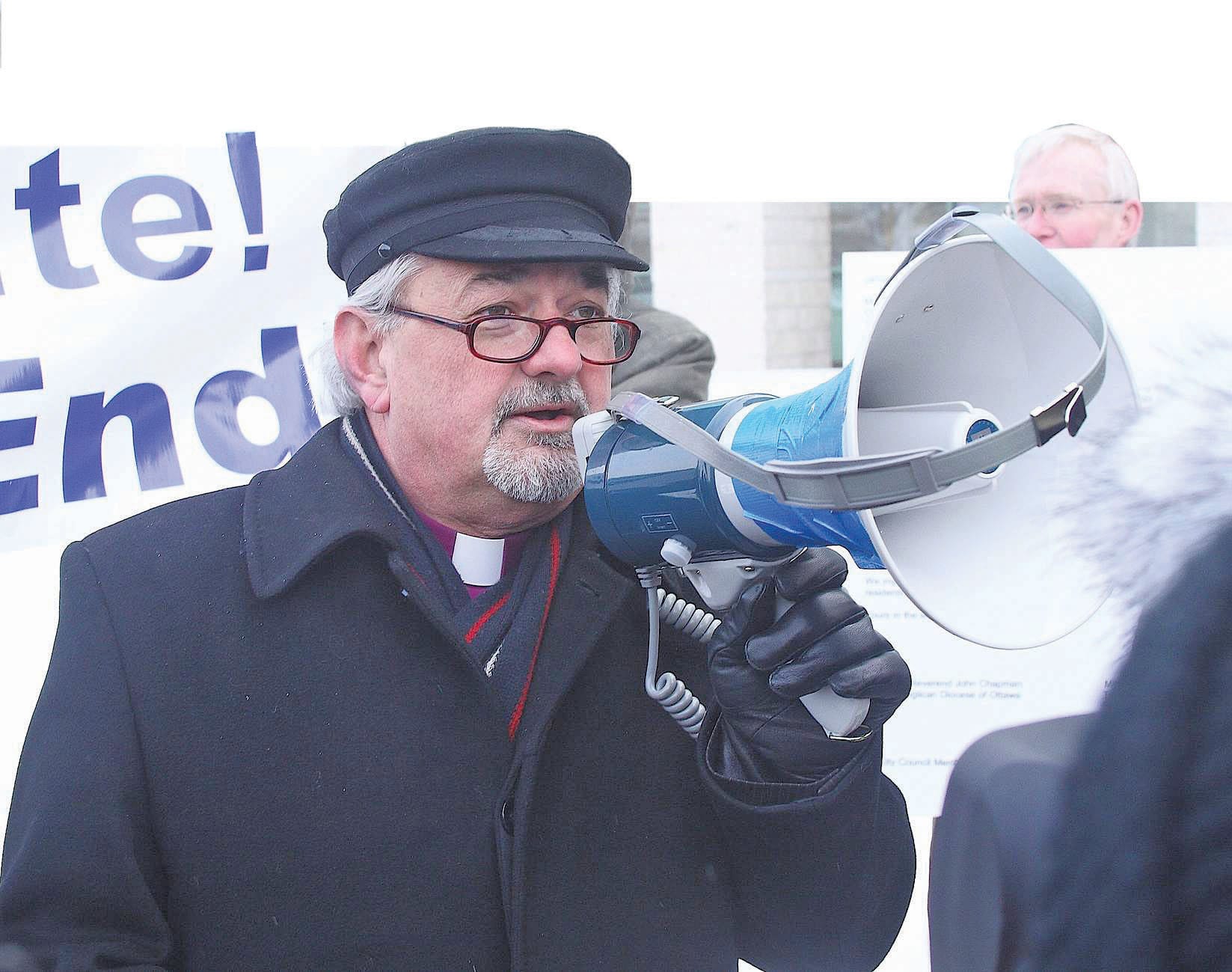 “When people are getting hurt, it’s incumbent upon us to stand strong for them and to speak for them,” says Ottawa’s Bishop John Chapman (above).
Photo: Art Babych

“There will always be poor people in the land,” says the book of Deuteronomy, urging believers to be open-handed toward the needy, and much of Christ’s ministry was focused on the disadvantaged and dispossessed.

Mindful of that, in January 2011, the primate of the Anglican Church of Canada and the national bishop of the Evangelical Lutheran Church in Canada sent a letter asking the federal government to adopt the recommendations of a House of Commons committee for reducing child and family poverty in this country. It urged Ottawa to support broad systemic measures to improve living standards for millions of impoverished Canadians.

In the meantime, reports continue to document growing poverty and income inequality. About one in 10 Canadians lives in poverty and one in four indigenous children lives below the poverty line. The income gap between our wealthiest citizens and our poorest has widened to a ratio of 10 (times the income) to one, from eight to one before the mid-1990s. Advocates are calling for measures to expand poverty reduction targets to single adults, not just families and children.

Across Canada, committed Anglicans are engaging the poverty issue at many levels and in many ways. Increasingly, they are asking for sweeping forward-looking measures that will alleviate the root causes of poverty in the years to come. Others are continuing with traditional boots-on-the ground charitable work-soup kitchens, shelters, drop-in centres, food banks and clothing giveaways-to help the needy now.

Systemic changes
In Vancouver, the Rev. Margaret Marquardt, co-chair of the eco-justice unit of the diocese of New Westminster, is part of a mixed-membership organization aiming to reduce long term the overall conditions that foster poverty. “With the approaches taken so far, we are not changing the status quo,” she says. “People are getting poorer and more desperate, so we are focusing not on the old charitable model of food and clothing giveaways but on making systemic changes.”

She is part of the Metro Vancouver Alliance, a three-year-old non-partisan association of Christian churches and non-profit, labour and educational organizations. Harking back to the venerable model of community organizing used by urban-renewal activists in the 1960s and 70s, the group has set its first task as building solid connections across various sectors. “You don’t start with the issues; you start with organizing communities across sectors that want to work together long term for the common good,” says Marquardt. “But within the year, we hope to actually begin work on specific problems.”

On behalf of the diocese, the eco-justice unit has also signed on to the Living Wage campaign, an international effort that has successfully secured the guarantee of a living wage for workers at the coming June Olympics in London. In Canada, the campaign has calculated the basic income needed by a family of two adults and two children-including the means to have a medical-dental plan, decent housing and adequate nutrition without resort to food banks. “The required minimum wage for both adults works out to $18 an hour,” she says. That is double or close to double the average minimum.

One major obstacle to improving impoverished living conditions is the dearth of affordable housing. After visiting the food and clothing banks, many return home to substandard living quarters that cost an unacceptable percentage of their income. Hence, this is a cornerstone of the Vancouver group’s policy. “Across many sectors and at all three levels of government, we are calling for policy action on affordable housing,” Marquardt says. “We are asking parishes to write letters on housing and we are partnering with many others calling for the return of the co-op housing of the past.”

Homelessness
The Anglican diocese of Edmonton is also tackling homelessness. According to the Rev. Rick Chapman, a priest with Edmonton’s Inner City Pastoral Ministry, the Anglican diocese has also signed on to the province’s and mayor’s plans to end homelessness within 10 years. In March 2011, the diocese joined the interfaith community in signing on to the 10-year Welcome Home program. Under this, members of the faith community befriend and accompany people who are making the not always easy transition from homelessness to stable housing.

“Often people who have been used to shelters are lonely in their new homes, especially since some move from the downtown core to more residential, middle-class areas where they feel uncomfortable,” says Chapman. They need support to adjust to solitary housing and to learn about healthier lifestyles and recreational opportunities in their new neighbourhoods.

So far, the initiative has hosted a walkabout immersion program in the inner city for about 25 representatives from six parishes in four different types of community: city centre, suburban, bedroom suburban and rural.

Over the next three months, the diocese will run a program called Education to Action to prepare different church communities to address homelessness in the greater Edmonton region, including their own areas.

But the poor also need pastoral care, which is the core focus of the Inner City Pastoral Ministry, in which Chapman has joined forces with pastors from the United and Lutheran churches and a Roman Catholic nun to walk spiritually with the urban poor.

The ecumenical group ministers to the many transient, homeless, aged, indigenous and mentally ill people who populate the downtown core. “We are a chaplaincy of presence. We pray with people, we grieve and celebrate with them. We walk with the abandoned,” says Chapman. The ministry also tries to bridge the divide between aboriginal people and mainstream culture.

Every Sunday, the churchless ministry holds a simple worship service with a rolled-out oak altar. “We average about 110 people,” he says. That’s followed by a lunch for 250 prepared by volunteers at 75 churches and a synagogue.

Female pastors make visits to a federal women’s prison and a women’s shelter. “We hold indigenous circle gatherings that speak to grief and loss in prayerful ways, whether it’s residential schools or being abandoned by your parents on the street as a teenager,” Chapman says. “Guided by the spirit of God, we walk with the people of Edmonton.”

Child poverty
Back east in the diocese of Ottawa, Bishop John Chapman is leading a child-focused charge against poverty with the Bishop’s Child Poverty Initiative. Starting from the premise that well-fed children are more engaged and attentive learners and therefore less likely to be poor as adults, the initiative helps schools educate children about low-cost, nutritious food and donates money to school lunch programs in which kids shop for and prepare healthy lunches.

“This is an attempt to be proactive, not reactive-[and]…to work strategically at the front end of the problem by teaching kids how to eat well, buy healthy food and create economical menus,” says Bishop Chapman.

The diocese is also active on the homelessness front. Under its Serving God’s World program, it operates Cornerstone, a residential facility that houses homeless Ottawa women. It also runs The Well, a gathering place for women and women with children, and Centre 454, a day program for men and women who are homeless or at risk of becoming so.

Chapman finds that government is increasingly more attuned to the immensity of the poverty issue, and different levels of government support various Anglican social services programs. Cornerstone, for example, is supported by all three levels because homelessness is such a large problem. “The church’s voice is being heard, but we must be seen to be doing something ourselves,” says Chapman. “We are often quick to criticize without stepping up to the plate. But we can hold all levels of government to account if we, too, are doing something.”

As for recent reports of continuing poverty and growing income disparity, Chapman says, “They just confirm that we have to keep doing what we’re doing.”

Joining forces
In the Gander-based diocese of Central Newfoundland, Bishop David Torraville has joined forces with the Religious Social Action Coalition of Newfoundland. “This group seeks to make poverty an issue in elections and asks persons running in provincial and federal elections to express themselves in relation to ending poverty,” he says.

Individual parishes, he adds, are very active in anti-poverty leadership and food banks. The parish of Catalina raised more than $100,000 and partnered with the Mennonite church to rebuild homes after Hurricane Igor savaged Newfoundland in September 2010.

“My goal is to get more deeply involved in the work of groups that address the political and social underpinnings of policies furthering the gap between rich and poor,” says Bishop Torraville.

He’s been calling attention to an emblematic Canadian Tire ad that claims that one-third of Canadian children cannot afford to be involved in organized sport. “What does it say about us that we appear content to live in a community where it takes the corporate world to recognize that one-third of children are disadvantaged? If organized sport is a problem, how many of those children are underfed and under-housed?”