Home » The lure of old China

The lure of old China 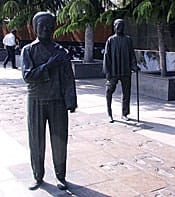 Bronze statues depict the survivors of the Nanjing massacre.

We traveled by train from Shanghai to Nanjing, the old capital, for four-and-a-half hours. After bumper-to-bumper traffic and rows upon rows of humongous buildings in Shanghai it was a relief to see vast fields of green and yellow (canola, we were told).

David Shi, our guide and translator, remarked there would be fewer people in Nanjing. “It’s a small city. Only four million,” he said, and we all burst out laughing. Toronto, the largest city in Canada, has a population of 2.4 million, we told him.

A renowned historical, cultural and educational centre in southern China, Nanjing is the capital city of Jiangsu province and was an ancient capital for 10 dynasties and kingdoms. While Shanghai is certainly impressive from a modern perspective, Nanjing has retained its old world charm that one can only hope won’t disappear in the rush to modernisation. Church membership in Jiangsu province is 1.2 million, according to Rev. Xinyi An, chair of the committee of the Three Self-Patriotic Movement (TSPM) and principal of the Jiangsu Bible School. The province has 140 pastors and 240 elders. “In the beginning our churches had more old women, now we’re getting young people,” he noted. Locals used to refer to the church as 3899, he said, because it used to be the base for the Communist Party. Three, he explained further, stood for March (third month of the year) 8 (International Women’s Day), while 99 is September 9, Elders’ Day. “Canadian churches have been good to us. There is sympathy for our hardships and tribulation,” said Ji Jianhong, of the TSPM national committee and executive vice president of the Nanjing Union Theological Seminary. The seminary is currently raising funds to build a new campus so it can train more priests. It has acquired 73 acres of land, the price of which was reduced because of government intervention, he said. There is a need to combat old attitudes towards learning English and the pursuit of knowledge, he added. “There is a belief that knowledge makes people arrogant. They don’t realize that knowledge is important to carry out the gospel message. There is a need to be concerned not just with spirituality but current affairs.” A visit to Bishop K.H. Ting, China’s last Anglican bishop, was moved from his house to a hospital, since he fell ill shortly before the delegation’s visit. Among the first things he inquired about was the family of the late Archbishop Ted Scott, former primate of the Anglican Church of Canada, who died in a car accident last year. “Ted was a very close friend of mine,” he said. “He helped me a lot when I first came to Canada.” The delegation gave Bishop Ting, who is 89, a copy of Hugh McCullum’s biography of Archbishop Scott, Radical Compassion, and a small jar of maple syrup. “It’s something I didn’t want to miss for breakfast,” he said upon seeing the maple syrup. An eerie calm resides at the Nanjing Massacre Memorial, which contains the remains of some of the 300,000 civilians and prisoners of war slaughtered when Nanjing fell to the Japanese Imperial Army in December 1937. We visited the memorial, which contains one of the sites where thousands of human bones were excavated. It was built in the 1980s when Japanese officials denied that the massacre ever occurred and Japanese history textbooks were subsequently rewritten describing it a minor incident. This historical conflict continues to be a sore point in Chinese-Japanese relations. During our visit, the media reported at length about large anti-Japanese demonstrations in Shanghai and Beijing, resulting from periodic visits of Japanese Prime Minister Junichiro Koizumi to the controversial Yasukuni Shrine, which commemorates Japan’s war dead, including 14 war criminals.